The award from MIT-SHASS Global Studies and Languages honors cross-cultural fluency — an ability key to leadership and success in today's global world.

Two juniors with a strong commitment both to technical majors and to creative writing have been awarded the 2015 Isabelle de Courtivron Prize for Expository and Creative Writing.

Vivian Tran ’16, who is double-majoring in physics and nuclear engineering, won first prize for her essay “In the Ticks and Talks”; she is minoring in creative writing. Caleb Lin ’16, a double major in computer science and creative writing, received second prize for his poem "From Beijing to Beijing."

“Writing has brought a balance to my life,” Tran says. “It reminds me that I’m still very human. Working with equations all day, I don’t get to get in touch with myself and my emotions, and writing is a good way to do that.”

“People have this strong perception that MIT is to train engineers. I don’t think that’s entirely true,” says Lin, a published author who plans to continue his writing after pursuing a career as a computer scientist. “MIT is looking to train leaders in their field. They’re looking for innovators, people who will rise to the top of their field, whatever field that may be.”

The de Courtivron Prize is awarded each year by the Center for Bilingual/Bicultural Studies, a program in MIT’s School of Humanities, Arts, and Social Sciences (MIT SHASS), to recognize student writing on topics related to immigrant, diaspora, bicultural, bilingual, and mixed race experiences. The prize is named in honor of French Studies Professor Emerita Isabelle de Courtivron.

“In the five years since the prize was established, we’ve had a wonderful depth and breadth of work that speaks to the diverse makeup and incredible talent of MIT’s students, and this year was no exception,” says A.C. Kemp, lecturer in English language studies and head of this year’s prize committee. “There were many excellent entries.”

The impact of language on worldview

Submissions for 2015 ran the gamut from memoir to poetry to nonfiction, and students wrote about their experiences in Chinese, Colombian, Korean, and Russian cultures, among others. “This year’s entries were diverse, but there were some common themes. Many addressed language itself and how learning the language of parents or grandparents — or not learning it — changed the author’s worldview,” Kemp says.

Tran’s story, for example, examines her relationship with her Cantonese-speaking grandmother through the prism of an heirloom watch. Tran, who grew up in California and whose ability to speak Cantonese is limited, found working on the essay for a SHASS class personally beneficial. “The writing class was helpful for me to think about my relationship with my grandmother,” says Tran, who wrote the piece for the Advanced Essay Workshop taught by Ta-Nehisi Coates, an acclaimed author who served as a visiting scholar at MIT last year. “It was great to talk about my family history and learn more.”

Lin’s poem centers on the time he spent living in China. A native of California born to Taiwanese parents, Lin moved to Beijing at age 10 and was suddenly immersed in a foreign language and culture. His poem takes readers on a nostalgic journey through the city, recalling both the passage of time and the moment when Lin had to leave China and return to the United States.

“I think it’s very unique and special to experience a completely different culture firsthand,” says Lin, noting that his poem was inspired in part by an Advanced Poetry Workshop assignment to write a poem as a walk. It was also, he says, a vehicle for him to explore themes drawn from his first novel, The Boy With the Red Bike, a semibiographical tale of a boy who moves to China from the United States.

Lin wrote that book in English and succeeded in getting it published in a Chinese translation in 2012. Yet, the de Courtivron Prize is Lin’s first writing prize. “I was very pleasantly surprised [that I won],” he says. “It was a nice validation.”

Lin and Tran both earned monetary prizes for their essays and were formally honored at the Award for Excellence Dinner, held by the Global Studies and Languages on April 22, 2015. Tran also recently received the Boit Manuscript Prize, one of the Ilona Karmel Writing Prizes awarded by Comparative Media Studies/Writing within SHASS, for her prose poetry collection Introverted Intersections. 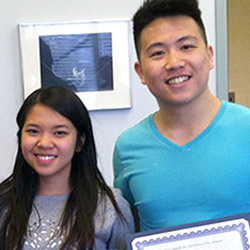 About the De Courtivron Prize

MIT Global Studies and Languages
Global Studies & Languages approaches language studies holistically, with contextual classes on international cultures, history, and media, as well as training in eight languages, from Spanish to Japanese to Russian. This broad-spectrum approach has put the section at the core of international education at MIT. GSL prepares students for success and leadership on international teams and provides the language skills and cultural background that students need to participate in MISTI (MIT International Science and Technology Initiatives), the Institute’s flagship international-education program, invented and orchestrated by SHASS faculty.