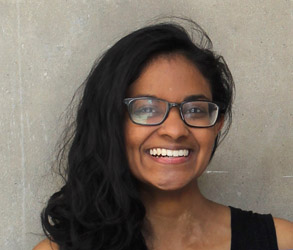 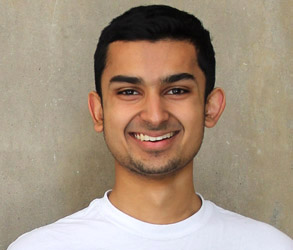 Pratyusha Kalluri (L) and Aneesh Anand (R) are the recipients of the 2016 Isabelle de Courtivron Prizes from MIT's Center for Bilingual/Bicultural Studies, a program of Global Studies and Languages.

Global Studies and Languages is pleased to announce the winners of the Isabelle de Courtivron Prize for 2016.

Aneesh Anand was awarded Second Prize for “Bhaasha,” a poetic exploration of his hybrid identity and an engagingly complex portrait of his family. Aneesh Anand is a junior majoring in Computer Science and Economics.

The students received their awards at the Global Studies and Languages “Awards for Excellence Soirée” on Monday, April 25, 2016.

Center for Bilingual/Bicultural Studies (CBBS)
CBBS focuses on the intersection between the politics of language and culture and the new global realities of the 21st century. The objective of the center is to examine the history as well as the current ramifications of translingual, transnational, and transcultural phenomena. It is particularly concerned with the impact of crossing linguistic boundaries on patterns of communication, creative practices, identity formation and the cultural politics of the diaspora.