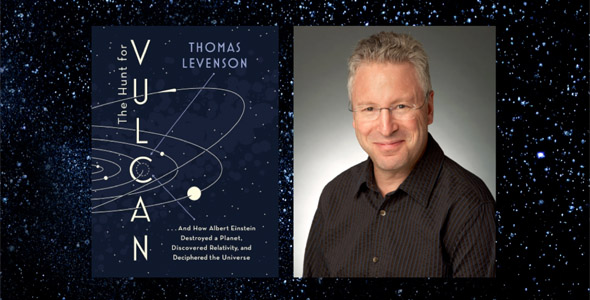 "Disproving Vulcan’s existence was central to Einstein because it showed that this radical, bizarre new picture of his … was actually the right way to see the universe."

— Tom Levenson, from interview in The National Geographic

The Hunt for Vulcan, the most recent title by MIT-SHASS Professor of Science Writing Thomas Levenson, has been named a finalist for the 2016 Royal Society Insight Investment Science Book Prize.

Since its establishment in 1988, the Prize has hailed new titles in popular science by authors around the globe, highlighting the vital importance of science writing for a non-specialist audience. Each author whose title appears on the shortlist receives more than $3,200 (£2,500) while the author of the winning book will receive a cash award in excess of $32,000 (£25,000).

In his statement, 2016 judge Bill Byrson calls this “the Nobel Prize of science writing” and exhorts readers worldwide to embark upon new adventures in science writing.

Director of the MIT-SHASS Graduate Program in Science Writing, Professor Thomas Levenson is an award-winning documentarian, the author of four other volumes of science writing, and the 2016 receipient of the James A. (1945) and Ruth Levitan Prize in the Humanities. He has been awardrd the Walter P. Kistler Science Documentary Film Award, a Peabody Award (shared), a New York Chapter Emmy, and the AAAS/Westinghouse award, as well as the 2005 National Academies Communications Award for his Nova miniseries, “Origins.”

The winner of this year's prize will be announced in September.

MIT News interview with Thomas Levenson on The Hunt for Vulcan

National Geographic: The Hunt for Vulcan, The Planet That Wasn't There