Ken Oye and the art of sociotechnical problem-solving 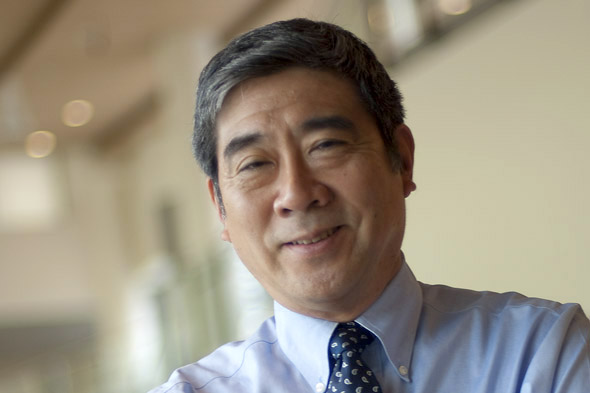 Political scientist Kenneth Oye has discovered that collaborating with technologists is a very effective way to inform good policy on the issues he cares about most — from climate change to synthetic biology. He believes that MIT has a leadership role in understanding and engaging with the consequences of the technologies we develop.

As MIT works to advance solutions for global challenges in the realms of innovation, education, planetary environment, and human health, MIT’s School of Humanities, Arts, and Social Sciences has tapped key scholars and researchers to provide insight into meeting these challenges from a wide range of disciplinary perspectives.

As part of The Human Factor Series, which looks at how political, cultural, and economic realities of the human world are critical to advancing solutions to major issues, SHASS Communications spoke recently wtih Ken Oye, an MIT political scientist. Oye, who frequently collaborates with engineers, scientists, and policymakers on the implications of work in such fields as energy, climate, cyber-security, and biotechnology, is an adept at sociotechnical collaboration and problem-solving.

Skill in such collaboration is increasingly valuable because, as President Reif has said, the solutions to humanity's urgent challenges "depend on marrying advanced technical and scientific capabilities with a deep understanding of the world’s political, cultural, and economic complexities."

Political scientist Kenneth Oye didn't set out to spend his career working with engineers and scientists, but over the course of 26 years at MIT he has discovered that collaborating with technologists is a very effective way to inform good policy on the issues he cares most about — from climate change to synthetic biology.

"Coming to MIT, surrounded by all these brilliant technologists, I ended up broadening the scope of my work to engage with technology," says Oye, whose cross-disciplinary work has ranged from analyzing Japan's nuclear policies to studying the safety of new pharmaceuticals. He has published research in Science and Nature and recently presented a white paper to the White House on how best to regulate emerging biotechnologies.

"I think the research I'm doing is informing policy where the risks, for human and planetary health, are significant," says Oye, who holds a joint appointment as associate professor of Political Science and is a core faculty member in MIT's Institute for Data, Systems, and Society (IDSS).

The IDSS team, which is committed to addressing complex societal challenges by advancing education and research at the intersection of statistics, data science, information and decision systems, and social sciences, is a natural for Oye, who says, "By doing this kind of collaborative research, I have the opportunity to help problem-solve in several very important areas.”

Oye's research areas are arguably off the standard path in academia  — which still tends to reward the deep exploration of a narrow field of study — but Oye is comfortable with the divergence. A Swarthmore graduate with a PhD from Harvard, Oye initially took the more traditional political science path — holding posts at Harvard's Kennedy School of Government and at Swarthmore and Princeton before joining the faculty of MIT in 1990. "I was hired to teach international relations, political economy, and American foreign policy — very classic fields in political science," Oye says.

When Oye became director of MIT's Center for International Studies (CIS) in 1992, however, he suddenly found he had become a focal point for scientists and engineers interested in incorporating policy thinking into a wide variety of projects — from the environmental impact of coal combustion in China to nuclear proliferation. Technologists at the top of their fields wanted his input to address environmental, health, safety and security implications of their technical work, and Oye saw an opportunity to have real-world impact on important issues.

"If you're not careful, technology policy can become cheerleading for the technology without an understanding of the larger context, of how policy problems have antecedents and roots that go way back," says Oye, who served as head of CIS until 2000. "As a bastion of science and engineering, MIT can also be a leader in both understanding and engaging with the consequences of the technology we develop."

Kenneth Oye is an associate professor of political science, former head of the MIT Center for International Studies, and a core faculty member of the MIT Institute for Data, Systems, and Society.

An affinity for collaboration

"I developed a taste for collaboration in part because of good experiences early on," says Oye, who has continued to advise engineers, scientists, and policymakers on the broader implications of work in such cutting-edge fields as biotechnology and cyber-security.

For example, in July 2014, Oye published a paper in Science exploring the need to regulate advances in the engineering of "gene drives" — genetic manipulations that can alter wild populations of plants and animals (such as, hypothetically, making mosquitoes incapable of transmitting malaria). Oye pointed out that such work is poorly covered by existing domestic regulations and international conventions.

In addition, in May 2015 Oye addressed the ramifications of a new opiate-production technology in a commentary piece that appeared in Nature Chemical Biology. Oye and his colleague J. Chappell Lawson, an MIT associate professor of political science, noted that the breakthrough could significantly worsen the opiate abuse epidemic. The pair offered recommendations for advancing beneficial research while limiting the likelihood of a quick-and-easy opiate-production method reaching the public.

Such examples highlight the importance of bringing a social science perspective to major global challenges, Oye says. "The knowledge and methodologies of the political science field provide the analytics foundation and the historical insights to inform really critical policy debates."

Most recently, Oye and colleagues from MIT and Harvard were asked to present a white paper to representatives from the White House Office of Science and Technology Policy offering a framework for regulating biotechnology. The paper addresses such issues as which regulatory body should oversee new organisms and advocates more research into the safety, environmental, and security implications of genetically engineered products.

Oye is collaborating with colleagues at MIT's Computer Science and Artificial Intelligence Laboratory on cyber-security issues, exploring the risks new technological developments pose to critical infrastructure — from the electric grid to oil and gas supplies, communications pipelines, and finance. Once again, he is hoping to help inform real-world decision makers about the risks as well as the rewards of emerging technologies.

"This multidisciplinary work does not always happen easily, but it's happening here now in part because we have technologists receptive to the implications of what they're doing and who really want to get things right," Oye says. "There is a demand, which is why I'm a bit overcommitted," he adds. "It would be great to have more people from the social science fields join in this kind of sociotechnical, problem-solving collaboration."