MIT screening of the film "Exit Zero, An Industrial Family Story"
Monday, April 25, at 5pm, in the Bartos Theater, E15-070

Christine Walley, MIT Associate Professor of Anthropology, and Chris Boebel (Manager of Multimedia Development, MIT Office of Digital Learning) will screen their film, Exit Zero: An Industrial Family Story. The film documents the effects that the closing of the steel mills in Southeast Chicago had on Professor Walley's family. This is an intimate, moving documentary of a Rust Belt family struggling to come to terms with a changing America.

Melissa Nobles, Kenan Sahin Dean, MIT School of Humanities, Arts, and Social Sciences, will give an introduction. A reception and discussion with the filmmakers and David Autor, Professor of Economics, will follow.

Exit Zero is a feature-length documentary film that tells a personal story of the lasting social and environmental impacts of “deindustrialization” and the key role it has played in expanding class inequalities in the United States. Interweaving home movies, found footage, and a first person narrative, the film traces the stories of multiple generations of writer/producer Christine Walley’s family in the once-thriving steel mill community of Southeast Chicago. From the turn-of-the-century experience of immigrants who worked in Chicago’s mammoth industries to the labor struggles of the 1930s to the seemingly unfathomable closure of the steel mills in the 1980s and 90s, these family stories convey a history that serves as a microcosm of the broader national experience of deindustrialization and its economic and environmental aftermath. 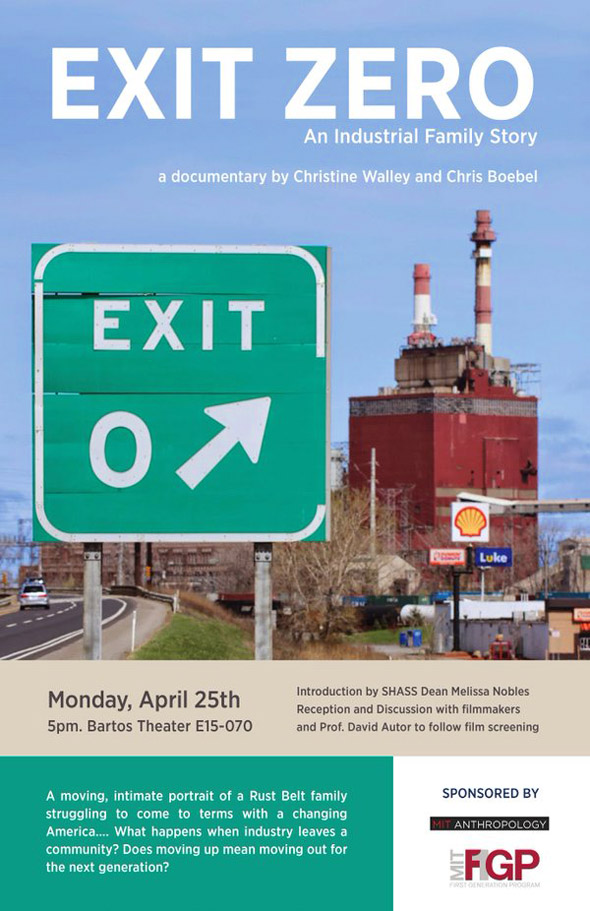