Song of the Human: An Origin Story 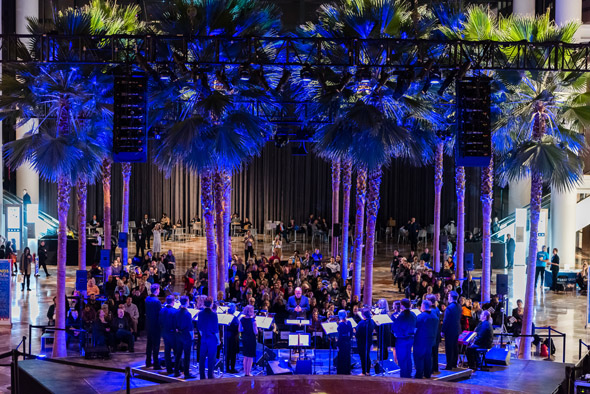 "The discovery of Miyagawa's Integration Hypothesis gave me a whole new view — the idea about human language and birdsong was no longer a personal comparison that was somewhat interesting, it was a larger scientific exploration. It deepened my own analysis and approach: I wouldn't have made ‘Song of the Human’ without it."

In the 16th century for example, the work of Copernicus, De revolutionibus, captivated William Shakespeare, whose plays are replete with references to the new astronomy. In the same century, the anatomist Andreas Vesalius enlisted the best draftsmen from Titian’s studio to create De humanis corporis fabrica, a book that had incalculable influence on both medical science and artistic practice, outpacing other similar texts in its impact, largely because of the masterful illustrations and superb printing.

A contemporary example of the reciprocal influences between scholarship and art is “Song of the Human,” a new musical work using birdsong, human voices, and found sound, for which British composer Pete M. Wyer drew on the research and hypotheses of Shigeru Miyagawa, a professor of linguistics in the MIT Department of Linguistics and Philosophy.

Hypotheses — which represent unfinished business for scientists — have often proven to be fertile ground for artists, and for Wyer, Miyagawa’s ideas about the origins of human language, occupy a borderland where reason, imagination, science and philosophy meet. While developing “Song of the Human,” Wyer read extensively from Miyagawa’s research, in particular his Integration Hypothesis, which builds upon Darwin’s observation that “the sounds uttered by birds offer in several respects the nearest analogy to language.”

The 18-channel sonic installation, iForest, and live choral performance that comprise “Song of the Human” — which premiered in October 2016 in the Winter Garden of the World Financial Center in New York — is now introducing Miyagawa’s ideas to communities beyond the academy. 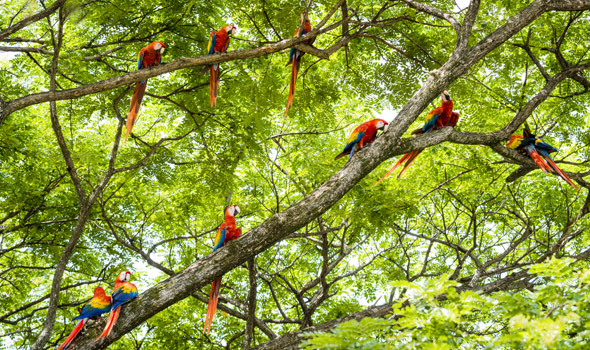 "Human speech can be quite musical — there's pitch, rhythm, tone and dynamics — and if one removes words, what's left is the song of the human, and it's remarkably similar to birdsong."

— Pete M. Wyer, composer
We must say goodbye | Excerpt from Song of the Human

How we speak in music

In brief, Miyagawa’s hypothesis suggests that there are two layers in all human languages — a ‘lexical’ layer (words), and an "expressive" layer (grammar), which closely resembles birdsong, and that these two layers merged between 50,000 and 80,000 years ago to form human language. In 2010, he published a monograph on syntax across many languages, Why Agree? Why Move? (MIT Press), a formal linguistic study of the two layers of language from the prism of what’s called the "duality of semantics."

While writing this book, Miyagawa was struck by how fundamentally different these two systems are and began researching correlates to both the lexical and expressive layers in nonhuman species. He found a counterpart for the lexical layer in the alarm calls system used by primates, wherein distinct calls correspond to outside stimuli.

Finding a correlate for the expressive layer proved elusive, however, until one day, he recalls, “I was sitting with some graduate students who were teaching children to play Japanese chess, shogi. When one graduate student from MIT Brain and Cognitive Science sat next to me, I asked about his research. He was researching songbirds and explained how they create patterns without meaning.

And I said, ‘Ah!’ and asked him for a reading list. Everything was completely serendipitous. In 2013, Miyagawa published his findings in Frontiers in Psychology, in a co-authored paper, "The emergence of hierarchical structure in human language." 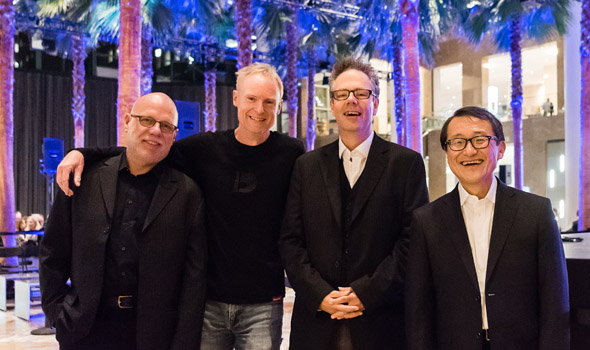 "Pete literally pulled off that idea that if you take language and drop all the words, what you have is a system with which you can communicate, but without specific lexical meaning. Instead, you communicate intent and emotions. That’s what the expressive system is. That's what gets you in contact with the world."

Meanwhile, in England that same year, Wyer chanced to overhear a couple on a train arguing in a language he does not speak. While he could not understand their words, he nevertheless understood the essence of their conversation — an experience that, he says, illuminated “something we easily forget: that we speak in music.”

Wyer wrote an article about the event for Broad Street Review in which he likened speech to birdsong. At that time, he had also observed that, after feeding mealworms to a robin in his garden, “The robin sang a little thank-you song, followed by a very soft song, which I initially thought to be sub-song. I was struck by how close the contours of the song were to human babbling. I also noticed how birds borrow melodies from each other, and humans do that in speech too. We take speech-melodies from people we like perhaps for the same reason, to make ourselves more attractive. This all led me to googling speech and birdsong, and I soon discovered an article about Professor Miyagawa’s hypothesis on the BBC website.”

Discovering Miyagawa’s hypothesis was “validating and inspiring,” Wyer says. “While I had made a connection between speaking voice and birdsong, I was conscious that I was approaching everything as an artist, not a scientist. As a musician and composer, it makes perfect sense that our speech developed from birdsong. I can’t think of another creature in the animal kingdom that has that variety of pitch, tone, dynamic and structure. The discovery of the Integration Hypothesis, however, gave me a whole new view — it was no longer a personal comparison that was somewhat interesting, it was a scientific exploration. It deepened my own analysis and approach: I wouldn't have made ‘Song of the Human’ without it.”

Wyer wrote to Miyagawa to tell him he was composing a piece that dealt with human language and birdsong. “He said the musical composition was inspired by my research," Miyagawa recalls. "He read everything I wrote about it, which is not easy because there’s a lot of technical stuff in these articles. And he would write to ask me to clarify what I meant by certain things. He was really committed to understanding my research.”

But it was not just the linguistic hypothesis that captivated Wyer: “What attracts me to Miyagawa’s idea is the whole philosophical principle underlying it. We use pitch, rhythm, tone and dynamic, musical elements, as part of our speech, and when we remove words and listen only to that music, we almost do encounter a new species. I find that a hopeful encounter. In this wordless song we get a glimpse of our inwardness, our inner nature. We can hear love, fear, playfulness, and other states of mind and emotion, but nationality, religion, race, gender disappear. Whatever we find in this song, we find in all people — the song of the human." 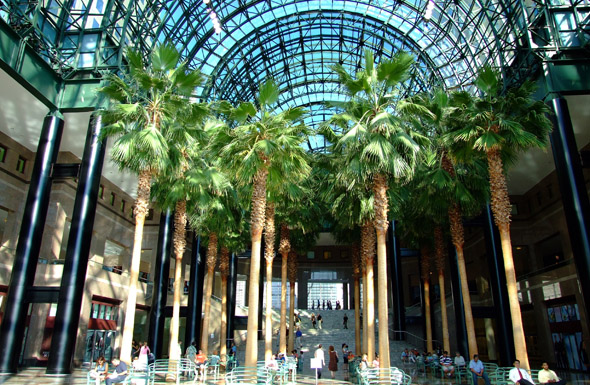 "In his 'Song of the Human' compositions, Wyer emphasizes what we 'share in music when we abandon words, and the connections we can rediscover when we move past the labels we attach to ourselves and others.' Miyagawa’s work likewise causes us to think of the universality of language in evolutionary terms. It is not just a random cultural construct, but is based in part on capacities humans share with other species."

The New York premiere of “Song of the Human” included a forty-minute choral score performed by The Crossing choir from Philadelphia, with an immersive soundscape comprised of the dawn chorus — a term for birds’ singing in the early morning, particularly in mating season. Wyer recorded the dawn chorus simultaneously at 16 locations in woods in Cornwall, Suffolk, and London in order to play back a vivid, immersive re-creation of nature's morning symphony. For the Winter Garden installation, Wyer also used multiple, independent speakers and software to move prerecorded sounds, such as wind and rain, throughout the space. By physically dispersing the sound, Wyer created an individualized experience in which each person can walk within the soundscape.

A way to interact with the world

In his “Song of the Human” compositions, Wyer emphasizes “what we share in music when we abandon words, and the connections we can rediscover when we move past the labels we attach to ourselves and others.” Miyagawa’s work likewise causes us to think of the universality of language in evolutionary terms. It is not just a random cultural construct, but is based in part on capacities humans share with other species.

After attending the premiere, Miyagawa observed, “What I understood, and appreciated, about what Pete did is this: he literally pulled off that idea that if you take language and drop all the words, what you have is a system with which you can communicate, but without specific lexical meaning. Instead, you communicate intent and emotions. That’s what the expressive system is. That's what gets you in contact with the world. Some would disagree, but I think that’s what the expressive system does — it gives us a way to interact with the world.”

“Song of the Human” will be performed in the Messums Wiltshire Gallery and Arts Centre in Tisbury, Wiltshire, England from February to March 2017.

Paper: The emergence of hierarchical structure in human language
Frontiers of Psychology, 2013

Recording: Song of the Human on Soundcloud

BBC Radio: What the Songbird Said
Biologists and linguistic scholars (including MIT's Shigeru Miyagawa) discuss what research on songbirds and other species suggests about how human language may have evolved.

Video: Creating "Song of the Human"