The Well-Versed Institute
Poetry at MIT

"The world counts on MIT to help invent the future. This limitless assignment requires the ability to visualize things no one has seen before, to create unexpected combinations, to listen to different voices and find new harmonies together.”

The roots of MIT's literary and arts traditions can be traced back to the earliest years of the Institute's history. The initial MIT course catalogue of 1865 offered classes in English and other modern languages; the Banjo Club and the first Tech Orchestra were formed in 1884; MIT's Dramashop launched with a Eugene O’Neill play in 1927; and in 1932, the Institute's newly formed Division of Humanities offered instruction in, among other subjects, music, fine arts, English, and literature.

The Pleasures of Poetry: Celebrating Twenty-Five Years in 2020

One shining example of the literary arts at MIT takes place each weekday afternoon during the annual January winter break, when a group of MIT students, faculty, staff, and alumni gather around a long table in Building 14 for "Pleasures of Poetry" series — a renowned, month-long course that runs during the MIT Independent Activities Period (IAP).

“The idea is to convene a diverse community to discuss poetry,” says Professor of Literature David Thorburn, who founded the series in 1996. “Regardless of one’s formal background in literature, poetry should be available to everybody.”

In keeping with Thorburn’s egalitarian view, no previous academic study of poetry is required to participate in Pleasures of Poetry. People can attend just one session or all the gatherings with no registration required. MIT undergraduates also have the option to take the course for credit. Thorburn’s vision has drawn MIT students, faculty, staff, and alumni from many MIT disciplines to the sessions, where participants can also choose to lead one or more of the afternoon discussions.

“The idea was to convene a diverse community to discuss poetry. Regardless of one’s formal background in literature, poetry should be available to everybody.”

Of the Pleasures of Poetry course, Wyn Kelley, Senior Lecturer in Literature observes, “You get such a wide range of people from across the institute participating. It’s very different from a typical classroom experience, and our students are amazed at the depth and connection that's possible outside the formal classroom.”

Session leaders come to the conversations with a range of backgrounds. The discussion might be led one day by an engineering alumnus, the next day by a biology student, then by a renowned literary scholar, and then by an MIT librarian. The conversations are lively — as ever, non disputandum de gustibus — and are characterized, famously, by a spirit of mutual regard.

“I'm a big fan of Pleasures of Poetry,” says Casey Crownhart, ’17, a double major in Chemical Engineering and Literature. “The sessions brought me back to the wintry landscape of Cambridge for IAP this year, and I expect they'll continue to do so in the future. The Pleasures of Poetry course also played a big part in my decision to become a Literature major at MIT.”

“It was great to be confronted with so many poets who I would not otherwise have come across,” says Adam Nahum, a postdoctoral fellow in Physics. “My knowledge of poetry was still heavily based on the British poets I read in high school, and it was wonderful to be led beyond that canon.”

By 1950, the curriculum of the MIT Division of Humanities had grown into a full-fledged school — the MIT School of Humanities and Social Studies ‚ and in 2000, reflecting the increasing significance of the arts for research and education became the MIT School of Humanities, Arts, and Social Sciences. "MIT-SHASS" as it is called on campus, is one of five schools at MIT, and the only one that teaches all MIT undergraduates, who take 25% of their required courses in the humanities, arts, and social sciences.

Just one year after the founding of the School in 1950, verse took a center stage at MIT when acclaimed poet ee cummings — best known to readers for his whimsical style and unusual typography — was invited to give a public reading on campus. The event was announced with some excitement on the front page of The Tech, MIT’s student newspaper, and was so well received that cummings was asked to return in 1958.

In subsequent years, visionaries like Robert Frost, Dylan Thomas, and T.S. Eliot all appeared on campus as well. (A recording of Dylan Thomas’s reading at MIT is available on the Harvard Woodberry Poetry Room website.)

“I wanted to present poetry at MIT as a living, vital art,” says Corbett from his home in Brooklyn. “My MIT students were interested in poetry but most of them had never heard it live. They deserved a taste — and they deserved to hear poetry that was not being presented elsewhere in Boston and Cambridge.”

Along with Corbett himself, a writing instructor at MIT for more than two decades, MIT-SHASS has had a number of talented poets among its faculty. In the years between 1950 and 2000, Elizabeth Bishop, Denise Levertov, Maxine Kumin, and Fanny Howe all taught at the Institute for a time. Poets currently on the faculty include David Thorburn and Stephen Tapscott in Literature; Erica Funkhauser, Ed Barrett, Nick Montfort, Susan Carlisle in the Comparative Media Studies/Writing program (CMS/W); and Maria Khotimsky, a renowned scholar of Russian poetry, in Global Studies and Languages.

“Poems teach our students how to dwell with concentration — a skill that must be learned, and one that students don’t necessarily develop elsewhere in their lives, especially these days.”

The poetry classes offered by MIT-Literature and CMS/W reflect the scope of the MIT-SHASS faculty. Courses on “Global Shakespeares,” "A Guidebook to Paradise Lost for Engineers," “Digital Poetry,” and “British Poetry and the Sciences of the Mind” are a sample from dozens of subjects. In addition, many of MIT's Literature and Writing courses can be explored online through the free MIT OpenCourseware project.

MIT faculty also pursue poetry research, including works on science in Romantic poetry, Shakespeare across time and media, T.S. Eliot's use of Dante, and the intersection of literature and digital technology. Associate Professor Nick Montfort, for example, theorizes, constructs, and produces computational verse — poetry generated by computer programs. His publications include #! and the 10 PRINT CHR$(205.5+RND(1)); : GOTO 10 project, a work co-written with nine other authors. In January 2015, Montfort published a New Year’s poem at the CMS/W blog that was generated by a single line of code written for the Commodore 64 BASIC program.

The Institute has served as an incubator for poets beyond the classroom as well. Longtime MIT staff member Pamela Alexander, now an Associate Professor at Oberlin College, ushered several much-admired volumes of poetry into print during her days at MIT. Kevin McLellan, administrator in Global Studies and Languages, published his debut collection, entitled Tributary, in 2015. Three active poets inhabit the staff of the Dean’s Office of MIT-SHASS, and at the MIT Press, Senior Production Coordinator Daniel Bouchard has a new volume of poems, Art & Nature.

In addition, in recent years MIT has given campus homes to both Boston Review, one of the nation's premier intellectual and literary magazines, and to PEN New England, the New England branch of PEN American Center, a venerable writers' organization that advocates for literacy, freedom of speech, and human rights. ("PEN" stands for "Poets, Editors, Novelists.")

A Laboratory of the Imagination

“I would be a tolerable Mathematician,” wrote the Romantic poet Samuel Taylor Coleridge in 1796. More than two centuries later, MIT students are proving that mathematicians — not to mention engineers, programmers, physicists, economists, architects, and biologists — make more than tolerable poets as well.

Erica Funkhauser, Lecturer in CMS/W and poet whose work has appeared in The Atlantic, Harvard Review, and AGNI, among other publications, says that the study of poetry offers MIT students a powerful opportunity to explore other types of puzzles: namely themselves, and each other.

Funkhouser’s students drew on this experience when they worked with her to write “Here We Are,” a poem she and her students read collectively at the 2015 ceremony to dedicate the Sean Collier Memorial. 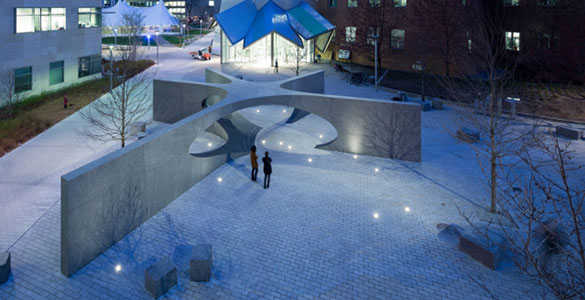 MIT Sean Collier Memorial, rendering by Iwan Baan, for the Collier Memorial Project
In collaboration with poet Erica Funkhouser, MIT students wrote a commemorative poem, "Here We Are," for the 2015 dedication of the memorial.

“In some ways,” said Stephen Tapscott, Professor of Literature, “I’m more proud of things like Pleasures of Poetry, and the many poetry classes and workshops that MIT has offered over the years than I am of the readings and the famous faculty. The Pleasures of Poetry course reveals a different kind of commitment to the art. Often the students studying poetry aren't doing it for the sake of a major or minor. They do it purely for the pleasure they take in the art.”

Tapscott, an acclaimed critic, poet, and translator, has been a member of the MIT faculty for more than three decades. (In his first year at the Institute, he recalls, his office was next door to that of Elizabeth Bishop.) MIT students gravitate toward poetry, Tapscott theorizes, not only because it energizes their creative thinking, but also because of the particular cognitive skills poetry helps them develop.


"I'm studying poetry to be a better engineer."

A recent entry on the MIT Admissions blog by an MIT Mechanical Engineering major echoes Tapscott’s sentiment. In a post entitled “I’m studying poetry to be a better engineer,” Michael C. '16, writes: “In a world where we are surrounded by anonymous, thoughtless, prosaic prose — think endless listicles on Facebook — reading a piece where every syllable, every punctuation mark, every line is carefully considered… it's a breath of fresh air.”

This young engineer has already recognized that studying poetry irreducibly mingles pleasure and craft. "There is a good argument," he says, "that art for art’s sake is reason enough" — and he also appreciates that a deep engagement with art goes hand-in-glove with the attainment of a set of powers, in the case of poetry the ability to communicate with concision and clarity.

As has often been noted, writing and studying poetry is frequently a path for increasing self-knowledge, discernment, and perseverance — all fine qualities to bring to creative, problem-solving endeavors. In 2015, when MIT was named one of the top three universities in the world for humanities and the arts, MIT President L. Rafael Reif reflected on why the Institute values the arts and humanities traditions, noting that “Humanities and arts teaching is central to guiding MIT students in their growth as human beings who…are prepared to be bold, thoughtful leaders of constructive change.”

In earlier comments for MIT's Spectrvm magazine, President Reif also observed that, “The arts have never been more integral to the life of MIT nor more deserving of our focus and attention. The world counts on MIT to help invent the future," he said. "This limitless assignment requires the ability to visualize things no one has seen before, to create unexpected combinations, to listen to different voices and find new harmonies together.” 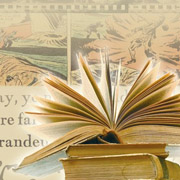 Web pages for poets mentioned in this article: