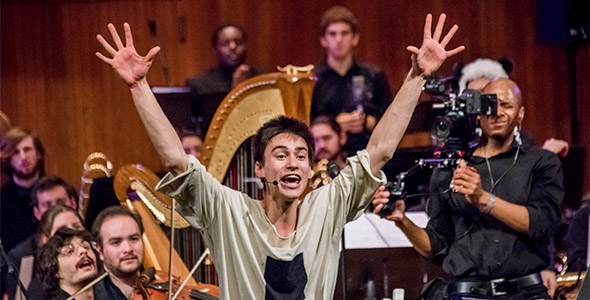 “I’ve heard or have been a part of concerts in Kresge for 37 years, and that night tops them all.”

“Being at MIT consistently reminds me of how wonderful it is when people think beyond the surface level — up and down to other realms of things,” Jacob Collier said from the Kresge stage on December 10, 2016.

The occasion was a three-hour concert that was the culmination of the multi-Grammy-winning musician’s residency with the MIT Festival Jazz Ensemble. It was produced by the MIT Center for Art, Science, and Technology (CAST) and with MIT Music and Theater Arts. The project began in the early fall of 2016 and grew to include a feature-length documentary.

“It was a kind of ‘perfect storm’ of circumstances and creative collaborations,” says Dr. Frederick Harris, MIT’s Director of Wind and Jazz Ensembles. “What happens when an extremely gifted musician connects with a brilliant music technology graduate student? They begin to build a unique instrument never before heard and tour the world with an innovative performance platform. And what happens when they collaborate with MIT musicians?”


A second home at MIT

Over the course of their collaboration, Collier’s appreciation for the Institute grew. “MIT feels like a second home to me now,” he says.

When Harris learned of their relationship, he began to craft a residency project that would allow MIT music students to engage directly with Collier and Bloomberg. To this end, Harris invited Jamshied Sharifi '83, an acclaimed composer-arranger-producer, to arrange some of Collier’s original music for jazz ensemble, choir, and full orchestra.

The fruits of that labor were on display at the December concert, which featured the MIT Festival Jazz Ensemble with an orchestra and chorus of musicians from MIT, Berklee College of Music, New England Conservatory, Boston Arts Academy, and UNH.

“It was an historic evening at MIT,” said Sharifi about the performance. “I’ve heard or have been a part of concerts in Kresge for 37 years, and that night tops them all.”

The power of art

The story of the collaboration is told by director/editor Jean Dunoyer in a new documentary film, Imagination Off the Charts: Jacob Collier Comes to MIT, which debuts in room 10-250 on Friday, September 8 at 7:00pm.

The film chronicles Collier's artistic collaboration with MIT featuring rehearsals, behind-the-scenes footage, interviews with the artists, and portions of the live concert performance. It shares insights into Collier’s music, his work with MIT students, and a system Bloomberg, Peter Torpey, and Brian Mayton implemented for Collier to offer real-time improvisational direction to musicians through the use of phones.

“While making this film,” notes Dunoyer, ’87, an editor-producer for MIT Video Productions, “I witnessed many immensely gifted people with a range of artistic skill sets bring enormous enthusiasm to this ambitious project. It was a testament to the power of art for bringing people together toward a positive and uplifting outcome.”

“[Jacob is] one of those once-in-a-lifetime kind of people who changes the way you look at things,” notes Jeff Moran, a postdoctoral associate in MIT’s Department of Nuclear Science and Engineering, and a bassist featured in the documentary film.

Produced by MIT Video Productions, the film was made possible due to the generous support of Jane and Neil Pappalardo '64.

Free tickets are available exclusively to the MIT community until September 1, and after that date are available to the general public. Seating is general admission. Please be in line by 6:45pm. After 6:45pm, your ticket may be released. A limited number of tickets will be available at the door. As space is limited in 10-250, we recommend that you reserve your ticket as soon as possible. 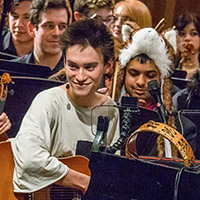