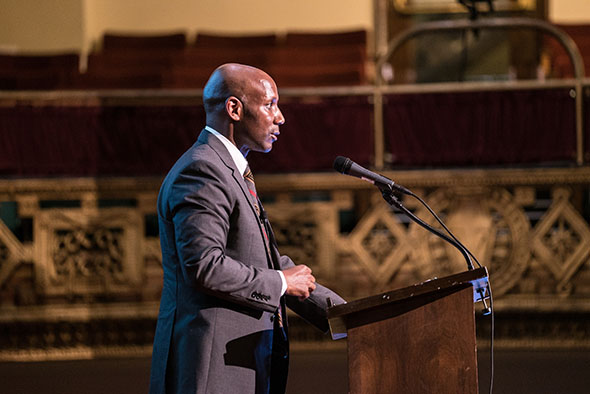 “Professor Wilder beautifully represents the values of this honor through both the significance of his research and his skill in engaging the public with the stories his research has brought to light.”

— Esther Mackintosh, President of the Federation of State Humanities Councils

“I was particularly honored to present the Capps Lecture this year,” said Wilder, “because we are in the midst of an era when the humanities are being disparaged, dismantled, and defunded. But great democracies need robust intellectual cultures. The National Humanities Conference includes organizations that are working every day to remind our nation that the humanities are central to our political and economic wellbeing.”

Slavery and public education in Brooklyn

Professor Wilder addressed a crowded Converse Hall in Boston on the topic of “Going Public: The Birth and Rebirth of Erasmus Hall.” The talk examined the origins of Erasmus Hall High School in Flatbush, Brooklyn, which was one of the city's most successful high schools in the first half of the twentieth century and certainly one of the most architecturally distinct public high schools in the nation.

Founded as a private academy in 1787, the school was named for the Dutch Catholic philosopher Desiderius Erasmus and attracted financial support and endorsements from the Revolutionary elite: Alexander Hamilton, Aaron Burr, Robert Livingston, etc. It also attracted students from across the United States and abroad. The school's success, Professor Wilder explained, rested on a simple economic reality. In the aftermath of the American Revolution and the British occupation of Greater New York, the agricultural economy of Flatbush was devastated. The village had only one real asset: slaves. 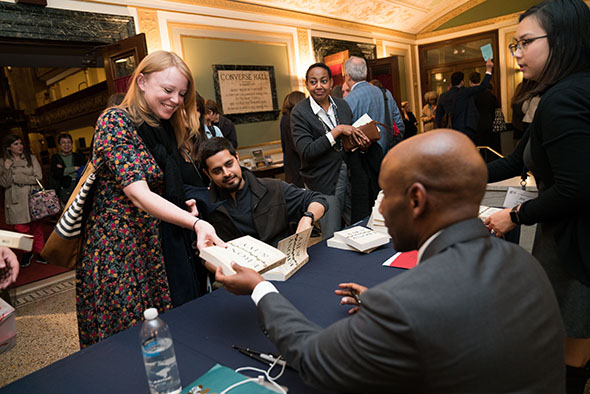 “We are in the midst of an era when the humanities are being disparaged, dismantled, and defunded. But great democracies need robust intellectual cultures.”

Enslaved African Americans were forty-six percent of the population of Flatbush. There were more than four slaves for every free family, and slaves easily outnumbered white adults. As town leaders advertised for students from outside the city, enslaved black labor allowed local families to take in boarders and collect fees. Those students also paid tuition that subsidized education for the local children. That little economy of commercial education worked remarkably well until slavery ended in New York state in 1827, when Erasmus began a long period of decline.

At the end of the nineteenth century, the trustees of Erasmus Hall transferred ownership of the academy, its grounds, and its building to the Board of Education in exchange for a promise that the city would build a modern high school on that property. Thus the legend of Erasmus Hall High School was born, allowing the city to claim a much older lineage for public education — but only by erasing the history of slavery from the history of both Erasmus Hall and Brooklyn.

Embodying the values of the Capps legacy

The story of Erasmus Hall not only reveals a forgotten — or erased — dimension of history, it also captures the essence of the Capps Memorial Lecture itself.

“In selecting the Capps Lecturer,” says Esther Mackintosh, President of the Federation of State Humanities Councils, “the Federation seeks an individual who embodies the values that Walter Capps brought to his profession and his life — a belief in the value of the exchange of stories, particularly those previously unknown, a commitment to the inclusion of all voices, and a belief in the power of stories to create a desire to act. Professor Wilder beautifully represents these values through both the significance of his research and his skill in engaging the public with the stories his research has brought to light.”

Established in 1999 by the Federation of State Humanities Councils Board of Directors, the Capps Lecture honors the memory of Walter H. Capps, who served as a professor of religious studies at the University of California before being elected to the United States House of Representatives from California's 22nd congressional district. The late congressman was a member of the California state humanities council for six years. He served as the board’s chair for three years and as the Federation board chair for two.

The Federation of State Humanities Councils Board of Directors

Story: Wilder documents links between universities and the slave economy in colonial America