No Walls: The making of a socio-political statement in music 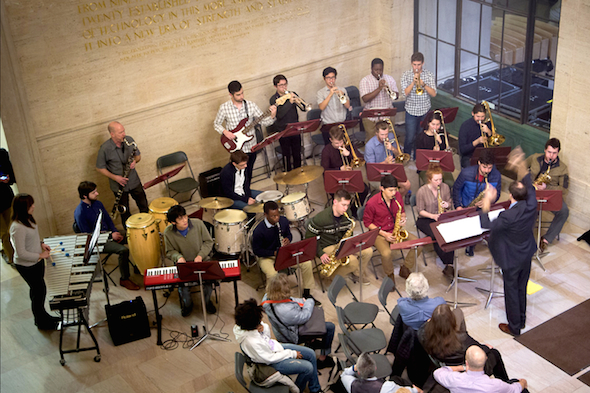 An anthem of inclusivity that celebrates our common humanity, "No Walls" was composed by Mark Sumner Harvey, founder and director of Boston’s Aardvark Jazz Orchestra, now in its 44th year.

Listen to the Finale of “No Walls” performed by the Aardvark Jazz Orchestra  (3:58)

I composed No Walls for my Aardvark Jazz Orchestra in December of 2004 on the occasion of our annual Christmas concert which that year benefitted Doctors Without Borders, an organization that provides medical care to people regardless of political or ethnic identity. This beneficiary was one of the inspirations for the music, an extended composition moving through several jazz styles with transition points purposefully obscured. The opening segment came from nature, as I listened to a flock of birds singing in a tree one day before they flew away unfettered by boundaries.

Another inspiration for the composition’s title and concept was Duke Ellington’s credo of living and making music “beyond category.” His sister Ruth spoke of a young Ellington having the motto “no boxes," while later in life, he wrote a brief poetical essay on the subject of walls. Published in his autobiography Music Is My Mistress, his rumination titled Walls appears within a long section chronicling his extensive international touring. It would seem that meeting people around the globe furthered his commitment to building bridges rather than walls.

Duke Ellington’s thoughts about walls are instructive. He wrote: "In order to have a category, one must build a wall, or two, or more....Walls go all the way back in history. There are the Walls of Jericho, the Great Wall of China, and the wall the Romans built to keep the Scots out of England....But of all the walls, the tallest, most invisible, and most insidious, that according to some observers mars the image of our country, is the wall of prejudice. Did God ever build a wall?"

And so, my composition No Walls seeks to inspire us toward what Ellington hoped for and wrote about in another essay, this during the late 1950s race for space. He encouraged Americans to work for “a new sound of harmony, brotherly love, common respect and consideration for the dignity and freedom of [all] men [and women]. A sound of unconditional love.”

The finale of my half-hour composition has another Ellingtonian resonance. This music is cast as a festive song inspired by the sound and style of the South African pianist/composer Abdullah Ibrahim, known in his early career as Dollar Brand. Brand was a discovery and protégé of Ellington. Born and raised in South Africa, under apartheid, Dollar Brand knew the terrible consequences of division between human beings occupying the same homeland.

The finale song was adopted by JazzBoston as its theme song and theme title for its Jazz Week 2014 celebration of the wide variety of jazz heard in the Greater Boston area. More recently, JazzBoston has posted this song on its website and recognized it as “an anthem of hope and inclusivity” in troubled times.

In the aftermath of the 2016 election, I was honored to have the finale performed as part of an event at MIT titled “Uniting Through Voice and Song.” The MIT Festival Jazz Ensemble gave a spirited rendition of "No Walls" that resounded through the halls of the Institute, part of a program displaying a range of genres and sources that make up American music. I am pleased to share this musical composition with hopes for a more just America that honors the best of its democratic values and traditions.

Uniting Through Voice and Song event at MIT
Story