THE HUMAN FACTOR | INSURANCE AND INDIVIDUALISM IN THE U.S. 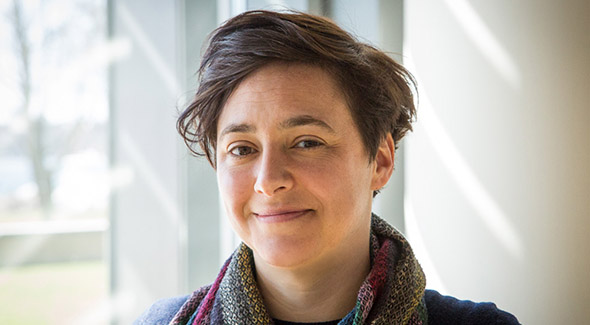 “Innovation is born of openness to futures that are not easily imaginable. History reminds us that many ideas, institutions, and organizational structures that now seem natural and inevitable did not always exist. In doing so, it throws open the door to boundless possibility.”

Science and technology are essential tools for innovation, and to reap their full potential, we also need to articulate and solve the many aspects of today’s global issues that are rooted in the political, cultural, and economic realities of the human world. With that mission in mind, SHASS Communications launched The Human Factor — an ongoing series of stories and interviews that highlight research on the human dimensions of global challenges. Contributors to this series also share ideas for cultivating the multidisciplinary collaborations needed to solve the major civilizational issues of our time.

Assistant Professor Caley Horan is an historian of the United States who focuses on the cultural and intellectual transformations of the post-WWII era. Her research interests include business history and the history of capitalism, cold war culture, risk and prediction, and the history of gender and sexuality. As part of the Human Factor series, SHASS Communications spoke with Horan recently about her book manuscript, Insurance Era, (now published, University of Chicago Press, 2021) which explores the cultural life of insurance and the role of risk-based thinking in shaping American institutions and daily life during the second half of the 20th century.

Q: You’re currently working on a book project that examines the rise of the private insurance industry after the Second World War. What form did insurance take prior to the one we’re familiar with today? What factors caused the shift to this new model?

A: Human beings have always found ways to survive in a fundamentally uncertain world. Before the late nineteenth century, those ways most often involved collective forms of risk sharing rooted in solidarity, interdependence, and mutual aid. Extended kinship networks and fraternal societies offer just two examples of risk-sharing systems that were common in the United States before private and public insurance became widely available. Structured around internal ties between members (rather than abstract categories relating to risk), community-based systems like fraternal lodges pooled the resources of members — be it money, food, or other kinds of assistance — and distributed them to those in need.

Patterns of industrialization, migration, and urbanization helped break down many of these forms of communal support during the early years of the twentieth century. These developments also produced new hazards, like industrial accidents. Though maritime, fire, and some rudimentary forms of life insurance had existed for centuries in the United States and elsewhere, these forms of coverage were typically only available to the most elite members of society. As older, communal forms of risk sharing became less viable, two competing security systems geared towards the general population emerged to take their place: commercial insurance (offered by corporations), and social insurance (offered by the state).

"Why did Americans come to believe that security provided by private corporations was superior to social programs offered by the state? Why did the US not develop a robust and inclusive welfare state, of the sort that that emerged in 'peer nations' in Western Europe?"

Commercial insurance did not begin its meteoric rise until the turn of the twentieth century, and it did not truly achieve dominance in the United States until the post-WWII years. How it did so is a question that interests me deeply. Why did Americans come to believe that security provided by private corporations was superior to social programs offered by the state? Why did the US not develop a robust and inclusive welfare state, of the sort that that emerged in “peer nations” in Western Europe?

To answer these questions, I look to the efforts of the private insurance industry as it attempted to compete with an expanding American welfare state during the mid decades of the twentieth century. Leaders of the industry viewed New Deal public programs like Social Security with alarm. Insurers saw the state as a dangerous competitor in the market for security, and took great strides (through advertising, public relations campaigns, and extensive lobbying) to convince Americans to turn away from the idea of a providential state, and to instead embrace privatized security. One of the primary conceptual tools the industry used in this campaign was the notion that participation in social insurance programs was a form of dependency, while private insurance consumption was a marker of autonomy and individual responsibility. This strategy was largely successful.

A: On the most concrete level, private insurance companies helped transform the built environment of the United States by playing an often-overlooked role in financing suburbanization. In the 1950s and early 1960s, insurance companies began withdrawing their substantial investment dollars from many American cities, and then pouring those dollars into suburban subdivisions, shopping malls, and suburban corporate campuses. This move, plus the industry’s widespread embrace of redlining (a practice in which companies deny access to insurance products in certain neighborhoods), helped deepen and cement patterns of urban crisis, while also leaving city residents, many of whom were poor and people of color, without a safety net.

Industry underwriting practices during the postwar period further limited access to insurance products for many Americans most in need of security. Insurers worked actively throughout the postwar era to refine their risk classification structures, a process that entailed the collection of massive amounts of data and the production of new categories related to risk. Risk classification was thought to create incentives for responsible individuals who managed their own risks by engaging in safe, secure behaviors. An insured car owner, by this logic, was more likely to drive safely if she knew that her auto insurance premiums would rise if she received speeding tickets or crashed her vehicle. Of course, more refined risk classifications also helped insurance companies beat out competitors. The more accurately companies could identify what the industry called “bad risks” and eliminate them from coverage, the more likely they were to reduce claims, lower premiums, and attract more “good risk” customers.

“By masking the inherently collective nature of insurance, the industry helped discourage Americans from believing that their own fates were tied to those of others.”

This strategy gave insurance companies a competitive advantage, but it had disastrous impacts on the individuals and communities “classified out” of commercial coverage, often for reasons beyond their control. The only recourse for “bad risks” was the state, which became an insurer of last resort — a subordinate safety net set up to catch those groups and individuals deemed too risky for participation in private markets. Not surprisingly, this dynamic reinforced the taint of dependency associated with social insurance and public programs.

On a more abstract level, the private insurance industry has also helped contribute to a larger pattern of social atomization over the past half century. Although nearly all forms of insurance spread risk across populations, Americans tend to disregard this redistributive function, focusing instead on the insurance policy as a contract between an individual and a private company. Few of us, for example, imagine that our premiums will eventually be used to pay off the claims of others who encounter misfortune.

This vision of insurance, as a strictly individual form of protection having little to do with the welfare of others, first emerged during the post-WWII years. Downplaying the more collective elements of risk spreading became a primary goal for American insurers during an era of intense anti-communism and fear of redistributive systems. By masking the inherently collective nature of insurance, however, the industry helped discourage Americans from believing that their own fates were tied to those of others. Sharing risk binds people together, fosters a spirit of interdependence, and encourages mutual aid and trust. For a good part of the twentieth century, the private insurance industry discouraged these vital ingredients for a healthy society. The legacy of those efforts can still be felt today.

"Of course, history and other humanistic fields are also valuable beyond a utility calculus. The great calling of the historian is to tell stories that are true. These stories are valuable in their own right as human endeavors that capture, record, and reflect the human experience."

Q: As President Reif has said, solving the great challenges of our time will require multidisciplinary problem-solving — bringing together expertise and ideas from the sciences, technology, the social sciences, arts, and humanities. Can you share why you believe it is critical to incorporate tools and perspectives from the field of history in social innovation?

A: History is a great denaturalizer. It reminds us that many ideas, institutions, and organizational structures that now seem natural and inevitable did not always exist. Historical study allows us to recognize the contingent nature of both the past and the present. In doing so, it throws open the door to boundless possibility. Innovation is born of openness to futures that are not easily imaginable. History nourishes that sort of openness by underscoring the uniqueness of the past and by revealing the present as a product of conflict. Put another way, history teaches us that the world we live in was not inevitable. This frees us to imagine unpredictable and radical futures.

Of course, history and other humanistic fields are also valuable beyond a utility calculus. We are drawn to history because it is interesting! It captures our attention, and at its best, our passions. The great calling of the historian is to tell stories that are true. Some of those stories are useful in obvious ways to the institutions and powers that structure our present. Others are simply exciting, disturbing, inspiring, or strange. Regardless of their utility, these stories are valuable in their own right as human endeavors that capture, record, and reflect the human experience.