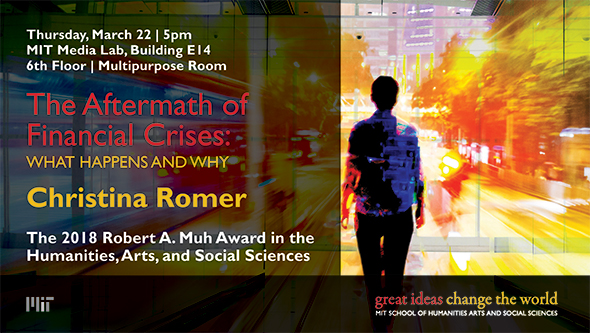 “As an advisor to President Obama during the global economic crisis, as a New York Times contributor, and as a leading academic, Christina Romer has played a key role in shaping the policy response to the worst economic downturn since the 1930s.”

Christina D. Romer, PhD ’85, has been selected as the recipient of the 2018 Robert A. Muh Alumni Award in the Humanities, Arts, and Social Sciences in recognition for her contributions to the field of economics.

“As an advisor to President Obama during the global economic crisis, as a New York Times contributor, and as a leading academic, Christina Romer has played a key role in shaping the policy response to the worst economic downturn since the 1930s,” says Melissa Nobles, Kenan Sahin Dean, MIT School of Humanities, Arts, and Social Science. “We are proud to count her among our distinguished alumni, and this honor is a fitting tribute to all she has accomplished.”

A scholar of crisis and response

Known for her macroeconomic research into the causes of the Great Depression as well as her examinations of the effects of monetary and fiscal policy, Romer served as the Chair for the US Council of Economic Advisers under President Obama and holds the Class of 1957–Garff B. Wilson Professorship of Economics at the University of California, Berkeley, where she has taught since 1988.

Since stepping down from the US Council of Economic Advisers in 2010, Romer has continued to focus on issues of national importance. Recent publication topics — the aftermath of financial crises in advanced countries, the effects of social security benefit increases, and the incentive effects of marginal tax rates — touch upon some of the most sensitive economic debates taking place in Washington, DC today.

Across a distinguished thirty-year career, Romer's awards and honors include the Council for Economic Education's Visionary Award, the John Simon Guggenheim Memorial Foundation Fellowship, and the National Science Foundation Presidential Young Investigator Award. She has been a regular contributor to the New York Times as well as a contributing editor to Bloomberg Television. In 2004, Romer was elected to the American Academy of Arts and Sciences and she served as Vice President of the American Economic Association in 2006.

Along with her husband, David Romer, PhD '85, she is currently the Co-Director of the Monetary Economics Program at the National Bureau of Economic Research as well as a member of its Business Cycle Dating Committee, the official arbiter of recessions and recoveries in the US economy.

About the Muh Alumni Award

The Robert A. Muh Alumni Award was first announced in October 2000 at the 50th anniversary celebration of the School of Humanities, Arts, and Social Sciences. Muh, MIT SB ’59, a life member of the MIT Corporation and past chair of the Humanities Visiting Committee, endowed the award to honor an MIT graduate who has made significant contributions to education, scholarship or performance, academic administration or arts management in the humanities, arts, or social sciences.