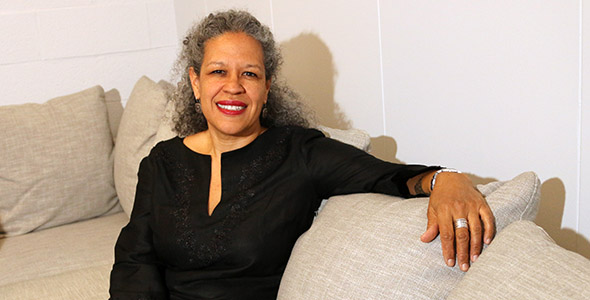 The Black Lives Matter and the #MeToo movements have brought renewed attention to roles that bigotry and sexism play in American institutions ranging from the media to the political establishment. From your perspective as a fiction writer, can you envision the way forward on racial and gender equity?

As a fiction writer, it is my job to inspire readers to imagine the world differently. I try to show things as they are, with enough humanity and hope to counter the despair provoked by the realities. These days, the realities are catastrophic, and while I struggle to envision racial, gender, and class justice, it is hard to find the good news that will feed my imagining.

Somehow, the realities of the current presidency exceed my negative expectations. Raised to understand how America’s “greatness,” its wealth and institutions and hegemony, were built on the bodies of my ancestors and on the suffering of many others, I am not given to optimism. But even I am shocked by the last two years, by the abhorrent acts of the administration, by the silence of so many in response, and by the white supremacy and misogyny that have surfaced and are being countenanced by so many in power.

Good news in the wilderness

There is, though, some light in the wilderness. People are so appalled that they are organizing, protesting, raising their voices, running for office, and voting. And the primary victories by several women of color running in the midterm elections are challenging expectations and conventional ways of thinking about leadership and authority. Recent news coverage details the daily harassment and threats that women now running for office, especially those who are members of minority groups, are enduring.

Nevertheless, these women are courageously stepping forward as candidates, and they are succeeding. They are building on the energy of the 2017 Women’s March, the #MeToo and Time’s Up movements, the focus of Bernie Sanders’ campaign on the increase in wealth and resource disparities, and now, outrage in response to Brett Kavanaugh’s confirmation hearings.

Women are speaking out, holding men with power accountable, and claiming seats at the table through the electoral process. And although many in Congress are refusing to listen, they may well pay for their deafness and moral vacuity in the midterms, as they did in the 1992 Year of the Woman, when the treatment of Anita Hill during Clarence Thomas’ confirmation hearings helped to inspire the election of three women to the Senate, 24 women to the House, and many to state and local offices.

A record number of women have filed as candidates this year, and a record number have won primaries in House and Senate races. Women of color make up one-third of the women candidates for the House, and three of four female gubernatorial nominees are women of color. Even if these milestones don’t result in a slew of wins in November, these candidates have changed established notions of what is possible.

An adage is being used to talk about the wave of women candidates: "If you can see it, you can be it.”

"Through the intrepid candidates who are running in the midterm elections, I can imagine a world where women control our narratives. Where we control our bodies. Where licenses to dominate and violate have been revoked, and we are believed and respected."

Women candidates are defying conventional wisdom about their chances and their platforms, and they are breaking long-standing rules about how they must present themselves. They are crafting their narratives to combine policy discussions with personal stories — about being mothers, about family struggles, and fights against sexual harassment and gender discrimination. I am especially heartened by the following three candidates who are changing the game.

Stacey Abrams, the first black female major party gubernatorial nominee in the United States, has defied established approaches in winning the Democratic nomination in Georgia. A former minority leader in Georgia’s General Assembly who has successfully worked with Republicans in that office, Abrams has run as an unapologetic progressive, supporting civil rights, abortion rights, gun control, and state expansion of Medicaid. And she has connected with voters by sharing aspects of her personal story, such as her brother’s history of mental illness, her own credit card debt, and her family’s struggles to make ends meet while stressing community service a way of life.

Instead of seeking to win over moderate-to-conservative voters, she has focused on “lifting up the voices of those who share our values” and her ability to mobilize young voters and the state’s growing nonwhite electorate. Although Republicans currently hold every statewide office, including both of Georgia’s U.S. Senate seats, Abrams won 76 percent of the vote, carried 153 of the state’s 159 counties, and won nomination by wide margins in both largely black Atlanta and many rural counties with fewer black voters.

Many people told 28-year-old, first-time candidate Alexandria Ocasio-Cortez that she was crazy for challenging Joseph Crowley, a 10-term incumbent and the fourth-highest-ranking member of the Democratic House leadership, in the primary for New York’s 14th Congressional District. U.S. Rep. James Clyburn, among others, argued that she should wait her turn before seeking to join the Democratic Party leadership. Yet impassioned voters nominated this proud Latina and Democratic Socialist in a surprising upset that has propelled her onto the national stage.

Ocasio-Cortez’s platform declares that housing is a human right, and it calls for a federal jobs guarantee, Medicare for all, and the abolition of ICE [U.S. Immigration and Customs Enforcement]. Although her district is majority-minority, its leadership has yet to reflect that composition, and she has galvanized voters by describing herself as part of a new generation of young, progressive Democrats unwilling to wait their turn any longer.

Here in Massachusetts, Ayanna Pressley defied the discouragement of state Democrats by running against 10-term U.S. Rep. Michael Capuano in the Democratic primary and winning. Pressley, who is black and the first woman of color elected to the Boston City Council, ran as an unabashed progressive in the state’s only minority-majority district, with the slogan “change can’t wait.” She addresses long-existing systemic inequalities and disparities, and she talks about her father’s addiction and incarceration during her youth and the sexual abuse and assault she has experienced.

Pressley won despite endorsements for Capuano by Boston Mayor Marty Walsh, former Massachusetts Gov. Deval Patrick, and civil rights icon and U.S. Rep. John Lewis of Georgia. Her win has been heralded as a sign that a “new Boston,” fueled by minorities, immigrants, and college students drawn to the area’s startups and tech industries, is emerging from a historically white male political establishment.

I hope that the current shifts in the political landscape will help to create a more just future, one where, in Abrams’ words, “no one is unseen, no one is unheard, and no one is uninspired.” Through the intrepid candidates who are running in the midterm elections, I can imagine a world where women control our narratives and our bodies. Where licenses to dominate and violate have been revoked and we are believed and respected. Where we are paid equally for our work and have the access and resources to realize our ambitions. Where we have equal representation in every sphere of society. Where we are undaunted.