Looking at justice through the lens of political theory
In Bernardo Zacka's 17.01 class, MIT students explore human values and competing theories of justice. 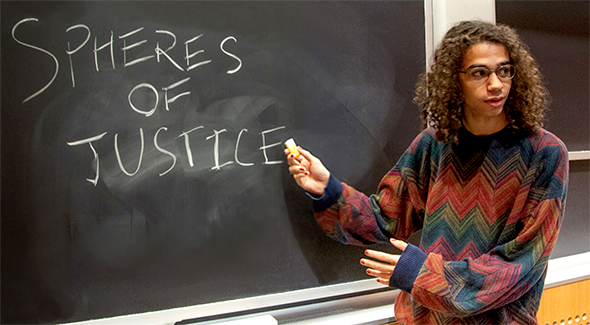 Students may arrive in this class expecting to learn about a straightforward roadmap to justice. They emerge with a more complex, nuanced and useful map — one that shows how power operates, as well as the many forms that justice and injustice can take.

It’s a charged time to be talking about justice. But in Bernardo Zacka’s classroom, which is devoted to that very subject, the concept of justice is center stage. An assistant professor of political science, Zacka is inclined to teach on topics that are much discussed in the current political climate — including power, inequality, and the challenges of collective action.

“It’s not just that these topics happen to be topical now,” he says, “it’s hard for me to imagine a world in which they wouldn’t be.”

In 17.01 (Justice), Zacka guides MIT students in how to think about such critical issues through the lens of political theory. The cases they grapple with often took place outside the students’ lifetimes, like coal mining strikes in Kentucky in the 1970s, although the class does engage with more recent cases too, such as the Supreme Court’s same-sex marriage ruling of 2015.

“There’s some advantage to thinking with a bit of distance,” Zacka explains. “But students will also be pondering how to apply these ideas to the present, and I encourage them to do so.”

Zacka joined the Department of Political Science in the fall, and as the department’s sole political theorist, it was a natural move for him to take on a course that examines various philosophies of justice.

For first year student Fiona Gillespie, the class was a chance to test the waters of a new subject. “I had never taken a political science class before,” she says. She went into the class envisioning discussions on what a just society might look like and how one might actually be achieved. During the class itself, however she became fascinated by the many ways in which a just society can be imagined.

“Each different political philosophy highlights a different goal," she says. "The goal of utilitarianism is to maximize the happiness of the society. The goal of libertarianism is to maximize the rights of the individual. In his theory of justice, John Rawls finds a balance between focusing on the community and the individual. I found it interesting to see how these goals could be combined."

Zacka himself graduated from MIT with a degree in Electrical Engineering and Computer Science, and cites his own undergraduate experience in 17.01 as influential in steering him into the political science field. (Read more about Zacka’s career and work in a recent profile.) He enjoys being able to introduce students to a new area of knowledge, and to see them apply their critical thinking skills to issues in the humanities and social sciences fields.

“The most rewarding aspect of this course is discussing the readings in recitation and finding new perspectives on these diverse philosophies,” says Gillespie. “The philosophies often seem logical at first, but certain situations can underscore serious problems with them. I really enjoy when we discuss such situations and how critics and supporters would respond.”

Although the comic-book character Judge Dredd appeared on the brightly colored posters announcing the Justice course, Professor Zacka says the image is very much tongue-in-cheek. Judge Dredd leaps to absolute conclusions of right and wrong; MIT's course on justice is geared toward students learning how to ask questions, to analyze, and to discern complexities.

“My role is not so much to give students a normative blueprint or to uncover what the good or the right or the just society would be, but to alert them to a range of important human values and to the tensions that exist between them.” 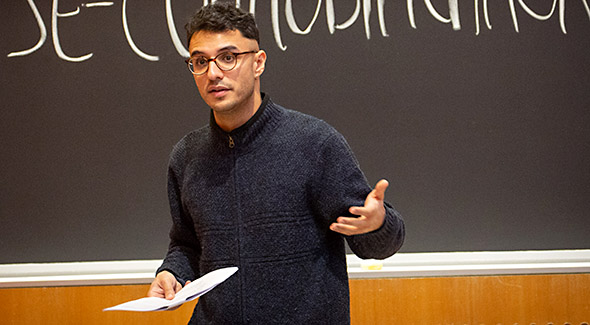 “This class has increased my ability to consider questions of right and wrong in political or legal matters. What surprised me the most is how our current institutions in the United States — and in most systems of government throughout the world — do not conform particularly well to any theory of justice."

Newcomers to political science and philosophy aren’t the only students for whom the course has opened conceptual doors. Sophomore Ahmed Elbashir, a Course 6 major with several political science classes under his belt, reflects, “This class has increased my ability to consider questions of right and wrong in political or legal matters. What surprised me the most is how our current institutions in the United States — and in most systems of government throughout the world — do not conform particularly well to any theory of justice."

While elements from different theories are visible throughout our system,” says Elbashir, “the United States constitution was not developed with one particular theory in mind, nor have the major institutions that have been created in the time since worked from a consistent definition of justice.”

Exploring such realities, students engage in an analytic exercise, weighing arguments for and against various theories, e.g.: where do the benefits of utilitarianism end, and how does libertarianism — even while aiming for justice — lead to consequences that might be unjust?

Even for relatively seasoned students of political science, the course offers unfamiliar territory to explore. “The general subject area is familiar,” says Elbashir, “but I haven’t experienced abstract political theory or philosophy before. This course has been a great introduction to some of the more fundamental questions of political theory — such as what individual rights public policy should seek to protect or what the aim of government should be.”

The politics of injustice

In previous iterations, the course was focused largely on covering three major theories of justice: the course began with utilitarianism, moved on to libertarianism, and then examined how the egalitarian liberalism of philosopher John Rawls synthesized some of the appeals of these two views while avoiding their pitfalls.

Under Zacka’s guidance, the scope of the course has expanded. “Basically I condensed the discussion of these three theories of justice into the first half of the semester,” says Zacka. “In the second half, we start with a critical reaction to this way of doing political theory. Instead of starting by trying to develop a theory of justice, we begin with experiences of injustice.”

The shift in structure broadens the range of voices to which students are exposed, with some readings drawn from feminist theory and post-colonial studies. “We primarily look at philosophy for the first half of the course, but where are the politics?” says Zacka. “Politics is about power, it’s about oppression, domination, ideology — we turn to these things in the second half.” 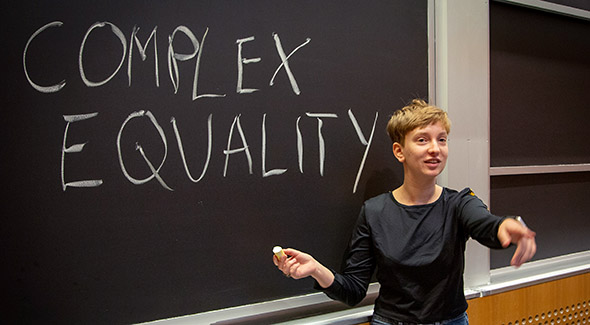 "This course has been a great introduction to some of the more fundamental questions of political theory — such as what individual rights public policy should seek to protect or what the aim of government should be.”

A complex and useful map

The course also contextualizes theories in the realities of the world in which students actually live.  “If we want to think about justice,” Zacka explains, “it’s important to start by understanding how we are all embedded in social practices and in communities structured by power, and how we can engage in social critique from there.”

Contextualizing ideals of justice brings into sharp relief for students the challenges of thinking about what a just society might look like and how to get there. While students may have arrived in the classroom expecting to learn about a straightforward roadmap to justice, they emerge from the course with a more complex, nuanced, and useful map — one that shows how power operates, as well as the many forms that justice and injustice can take.