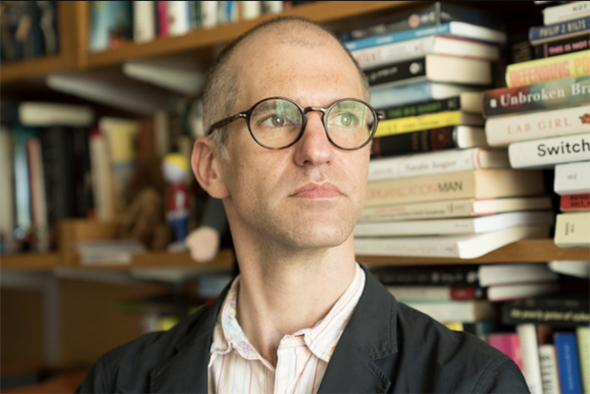 Science was a difficult type of challenge. It pushes me to constantly go out of my comfort zone. You’re always learning about new things, and I think that’s the coolest part about being a journalist.

As an undergraduate, Seth Mnookin went through five or six different majors before finally settling on history and science — an apt combination for someone who would end up heading MIT’s Graduate Program in Science Writing, as he does now. But there was a long road in between these endpoints.

“I didn’t think I had the skills to be a bench scientist,” Mnookin recalls, “but science was something that fascinated me.” At the same time, he says, “I knew since high school that I wanted to be a journalist.”

At Newton North High School in Newton, Massachusetts, he worked on the school paper, where he says he learned more from the paper’s advisor, Helen Smith, than he has “from any other person.” Smith imparted to her students the importance of attention to detail, Mnookin recalls, by “treating our paper as if it was The New York Times. … She really laid the foundations [and showed] that being a reporter gave you a way to go anywhere, talk to anyone.”

Mnookin pursued a dual history and science major as an undergraduate at Harvard University, which, he says, “allowed me to focus on science through a humanities lens.” That combination worked well for him, leading to a career as a writer for prestigious publications and eventually to penning award-winning books including “The Panic Virus,” about the erroneous belief that vaccines contributed to a rise in autism cases.