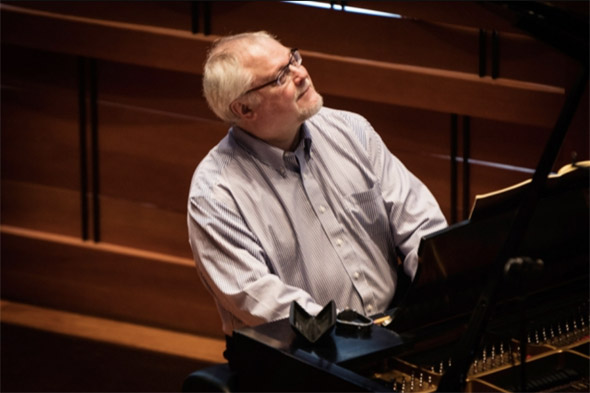 "I thought: If Beethoven could visualize three different cadenzas, maybe I could convince John Harbison to write new ones. Not only did he do so, but they provide a prism through which a current great composer views a great composer of the past. I cannot thank him enough."

For his latest recording, pianist David Deveau has drawn on works old and new. Deveau is a senior lecturer in MIT’s program in music and theater arts, and an internationally acclaimed performer. His latest album, released today by the Steinway and Sons label, features four pieces, including a Beethoven piano concerto for which composer John Harbison, Institute Professor at MIT, wrote new cadenzas, or extended solo parts for the piano. The recording, titled “Beethoven, Mozart, Harbison,” also features a Mozart piano concerto, as well as Harbison’s own “Anniversary Waltz,” and Mozart’s “Fantasia in C Minor.” MIT News spoke with Deveau, a 2014 recipient of the SHASS Levitan Award for Excellence in Teaching, about his new work.

Q: What was the genesis of this recording — and what made you decide to link these concertos together?

A: In recent years, I have been focusing more on recording projects. Live performances and playing for audiences have been my bread and butter for five decades, but at this point in my life, I’d like to record the music that is especially central to my career, and that I especially love. I’ve performed the Beethoven G major concerto more than any other — with orchestras including the San Francisco Symphony and the Minnesota Orchestra, among many others. For this recording, since there are dozens of extant recordings of this Beethoven, I wanted to offer something different. The chamber version, whose authorship is not historically certain, is typical of arrangements of concerti for reduced forces. Since there were no recordings or radio available in the early 19th century, people became familiar with music by playing it at home or in small gatherings. Composers (or their assistants) would make versions of major orchestral works for small ensembles.

Listen to the recording