Sylvain Bromberger, philosopher of language and science, dies at 94
Played pivotal role in establishing MIT Department of Linguistics and Philosophy 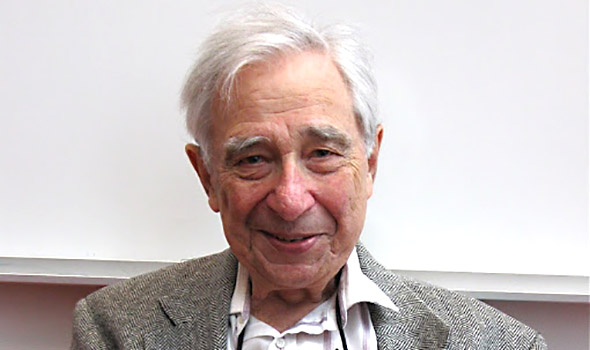 "Sylvain made enduring contributions to philosophy and linguistics, and his colleagues and students were frequent beneficiaries of his kindness and intellectual generosity. He had an amazing life in so many ways, and MIT is all the better for having been a part of it.”

Professor Emeritus Sylvain Bromberger, a philosopher of language and of science who played a pivotal role in establishing MIT’s Department of Linguistics and Philosophy, died on Sept. 16 in Cambridge, Massachusetts. He was 94.

A faculty member for more than 50 years, Bromberger helped found the department in 1977 and headed the philosophy section for several years. He officially retired in 1993 but remained very active at MIT until his death.

“Although he officially retired 25 years ago, Sylvain was an active and valued member of the department up to the very end,” said Alex Byrne, head of the Department of Linguistics and Philosophy. “He made enduring contributions to philosophy and linguistics, and his colleagues and students were frequent beneficiaries of his kindness and intellectual generosity. He had an amazing life in so many ways, and MIT is all the better for having been a part of it.”

Paul Egré, director of research at the French National Center for Scientific Research (aka CNRS) and a former visiting scholar at MIT, said, “Those of us who were lucky enough to know Sylvain have lost the dearest of friends, a unique voice, a distinctive smile and laugh, someone who yet seemed to know that life is vain and fragile in unsuspected ways, but also invaluable in others.”

Bromberger’s work centered largely on fundamental issues in epistemology, namely the theory of knowledge and the conditions that make knowledge possible or impossible. During the course of his career, he devoted a substantial part of his thinking to an examination of the ways in which we come to apprehend unsolved questions. His research in the philosophy of linguistics, carried out in part with the late Institute Professor Morris Halle of the linguistics section, included investigations into the foundations of phonology and of morphology.

Born in 1924 in Antwerp to a French-speaking Jewish family, Bromberger escaped the German invasion of Belgium with his parents and two brothers on May 10, 1940. After reaching Paris, then Bordeaux, his family obtained one of the last visas issued by the Portuguese consul Aristides de Sousa Mendes in Bayonne. (Bromberger later dedicated the volume of his collected papers On What We Know We Don’t Know: Explanation, Theory, Linguistics, and How Questions Shape Them [The University of Chicago Press, 1992] to Sousa Mendes).

The family fled to New York, and Bromberger was admitted to Columbia University. However, he chose to join the U.S. Army in 1942, and he went on to serve three years in the infantry. He took part in the liberation of Europe as a member of the 405th Regiment, 102nd Infantry Division. He was wounded during the invasion of Germany in 1945.

After leaving the Army, Bromberger studied physics and the philosophy of science at Columbia University, earning his bachelor’s degree in 1948. He received his PhD in philosophy from Harvard University in 1961.

Research and teaching at MIT

He served on the philosophy faculties at Princeton and at the University of Chicago before joining MIT in 1966. Over the years, he trained many generations of MIT students, teaching alongside such notables as Halle, Noam Chomsky, Thomas Kuhn, and Ken Hale.

In the early part of his career, Bromberger focused on critiquing the so-called deductive-nomological model of explanation, which says that to explain a phenomenon is to deductively derive the statement reporting that phenomenon from laws (universal generalizations) and antecedent conditions. For example, we can explain that this water boils from the law that all water boils at 100°C, and that the temperature of the water was elevated to exactly 100°C.

One simple though key observation made by Bromberger in his analysis was that we may not only explain that the water boils at 100°C, but also how it boils, and even why it boils when heated up. This feature gradually led Bromberger to think about the semantics and pragmatics of questions and their answers.

Bromberger’s 1966 “Why-questions” paper was probably his most influential article. In it, he highlights the fact that most scientifically valid questions put us at first in a state in which we know all actual answers to the question to be false, but in which we can nevertheless recognize the question to have a correct answer (a state he calls “p-predicament,” with “p” for “puzzle”). According to Bromberger, why-questions are particularly emblematic of this state of p-predicament, because in order to ask a why-question rationally, a number of felicity conditions (or presuppositions) must be satisfied, which are discussed in his work.

The paper had an influence on ulterior accounts of explanation, notably Bas van Fraassen’s discussion of the semantic theory of contrastivism in his book The Scientific Image (to explain a phenomenon is to answer a why-question with a contrast class in mind). Still today, why-questions are recognized as questions whose semantics is hard to specify, in part for reasons Bromberger discussed.

In addition to investigating the syntactic, semantic, and pragmatic analysis of interrogatives, Bromberger also immersed himself in generative linguistics, with a particular interest in generative phonology, and the methodology of linguistic theory, teaching a seminar on the latter with Thomas Kuhn.

A lifelong engagement with new ideas

In 1993, the MIT Press published a collection of essays in linguistics to honor Bromberger on the occasion of his retirement. The View From Building 20, edited by Ken Hale and Jay Keyser, featured essays by Chomsky, Halle, Alec Marantz, and other distinguished colleagues.

In 2017, Egré and Robert May put together a workshop honoring Bromberger at the Ecole Normale Supérieure in Paris. Talks there centered on themes from Bromberger’s work, including metacognition, questions, linguistic theory, and problems concerning word individuation.

Tributes were read, notably this one from Chomsky, who used to take walks with Bromberger when they taught together:

“Those walks were a high point of the day for many years … almost always leaving me with the same challenging question: Why? Which I’ve come to think of as Sylvain’s question. And leaving me with the understanding that it is a question we should always ask when we have surmounted some barrier in inquiry and think we have an answer, only to realize that we are like mountain climbers who think they see the peak but when they approach it find that it still lies tantalizingly beyond.”

Egré noted that even when Bromberger was in his 90s, he had a “constant appetite for new ideas.”

“He would always ask what your latest project was about, why it was interesting, and how you would deal with a specific problem,” Egré said. “His hope was that philosophy, linguistics, and the brain sciences would eventually join forces to uncover unprecedented dimensions of the human mind, erasing at least some of our ignorance.”

Bromberger’s wife of 64 years, Nancy, died in 2014. He is survived by two sons, Allen and Daniel; and three grandchildren, Michael Barrows, Abigail Bromberger, and Eliza Bromberger.

Podcast with Sylvain Bromberger | MIT Alumni Book Club
Asked what one book he would have all MIT alumni read, Professor Emeritus of Philosophy Sylvain Bromberger selected Adaptive Markets: Financial Evolution at the Speed of Thought, by MIT Professor of Management Andrew Lo. Here, Prof. Bromberger explains his choice and shares his thoughts on Lo's theory.