Are home health aides the new Turing Test for AI?
Professor David Mindell asks "What does it mean for a machine to be intelligent?" 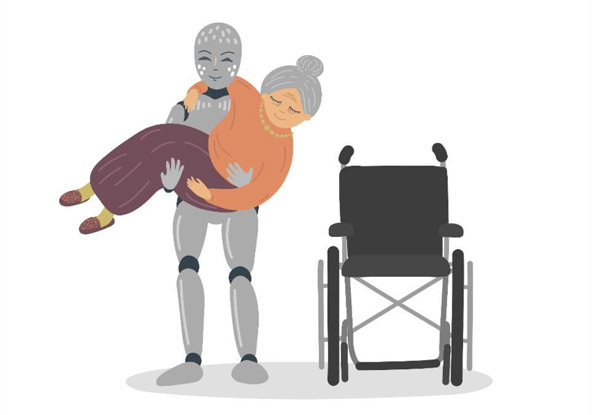 Work is a rich, multidimensional human activity, embedding cognition and skills within webs of social and economic relationships. It’s also something that humanists and social scientists know a great deal about, knowledge that is rarely built into robotic or AI systems. Work as a model for AI is a provocative idea, perhaps the ultimate goal, of an Artificial General Intelligence for the twenty-first century.

— David Mindell, professor in the MIT Program for Science, Technology, and Society

What does it mean for a machine to be intelligent? For decades, the common answer to that question has been to pass the “Turing test.” This test, named after famed mathematician Alan Turing, says that if a machine can carry on a conversation with a human via a textual interface such that the human can not tell the difference between a human and machine, then the machine is intelligent.

But there’s a problem: we were able to create chatbots that could pass the Turing test a long time ago. We know that the intelligence they display is narrow and limited.

Today AI is making great strides in any number of applications, chiefly through data-based approaches labeled “machine learning.” These approaches are successful and productive and display aspects of intelligence. We have come to realize that we can create many kinds of intelligence and that intelligent does not necessarily mean human. Today, AI is no one thing, but a variety of machine intelligences.

Still, researchers remain interested in the larger problem of human-like intelligence, or Artificial General Intelligence (AGI) — which also seems to be the source of much of the cultural fascination and anxiety surrounding AI.

In a series of provocative blog posts, my MIT colleague Rodney Brooks proposes new ways of thinking about AGI that go way beyond the Turing test. Brooks has long been a leader in robotics, and as a founder of iRobot and inventor of the Roomba vacuum cleaner, rightly claims to have made millions of robots that actually operate in the world (maybe more than anyone). He is also a member of the Research Advisory Board for a Task Force that I co-chair (along with economist David Autor) at MIT on the Work of the Future, which is seeking new approaches to AI, work and the social sciences.

Browse stories about Computing and AI