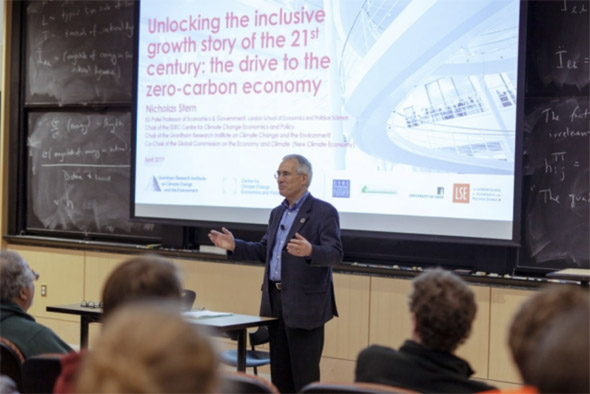 “As an economist working on an issue that affects the world in a relatively short time frame, is it enough, is it persuasive enough, to be doing research … and doing presentations like this?”

— Lord Nicholas Stern, chair of the Grantham Research Institute on Climate Change and the Environment at the London School of Economics

Prominent economist and policymaker Lord Nicholas Stern delivered a strong warning about the dangers of climate change in a talk at MIT on Tuesday, calling the near future “defining” and urging a rapid overhaul of the economy to reach net zero carbon emissions.

“The next 20 years will be absolutely defining,” Stern told the audience, saying they “will shape what kind of future people your age will have.”

To consider the climate trouble we are already in, Stern noted, consider that the concentration of carbon dioxode in the atmosphere is now over 400 parts per million, a level the Earth has not experienced for about 3 million years, long before people were around. (The modern human lineage is estimated to be about 200,000 years old.)

More SHASS stories about the Health of the Planet