A stage of their own
Presentation workshop for political science graduate students serves as training ground for research and professional skills. 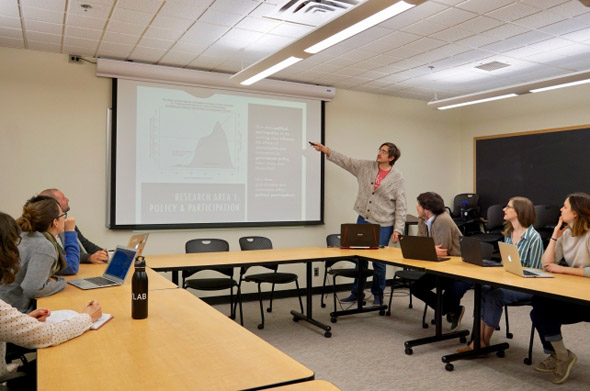 "The student-focused and cross-disciplinary perspectives are pretty rare, and those two characteristics together make MIT stand out."

The first time he formally presented graduate research to an audience, Minh Trinh's heart was racing.

"I was very anxious, really worried about how it would go," says the fourth-year political science doctoral candidate. "But after two or three minutes, it became clear that this was a low-pressure event, and that I didn't have to impress anyone."

Trinh's speaking engagement came courtesy of the Graduate Student Works in Progress (GWISP) program, which is supported by the Department of Political Science. GSWIP is run by and for graduate students, offering weekly windows during the academic year for students of all levels of graduate study "to present their work in a safe environment," says Gabriel Nahmias, a third-year and a GSWIP coordinator.

For the approximately 70 political science graduate students, GSWIP serves as a training ground for preparing research, addressing colleagues and learning conference protocol. "It's a really good forum to observe the professional side of political science, including the etiquette of asking questions," says second-year PhD student Rorisang Lekalake, another GSWIP organizer.