Jump-starting the economy with science
In a new book, MIT professors say more public investment in science will create a better economy for all. 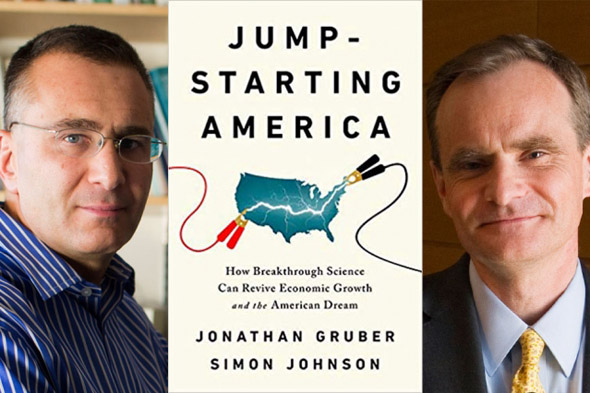 “Good jobs are for MIT graduates, but they’re also for people who don’t finish college. They’re for people who drop out of high school. There’s a tremendous amount of anxiety across the country.”

— Simon Johnson, Ronald A. Kurtz Professor of Entrepreneurship at the MIT Sloan School of Management

Reviving U.S. support of science and technology is one of the best ways we can generate economic growth, according to Simon Johnson and his MIT economist colleague Jonathan Gruber, who is the Ford Professor of Economics in MIT’s Department of Economics. And now Johnson and Gruber make that case in a new book, “Jump-Starting America: How Breakthrough Science Can Revive Economic Growth and the American Dream,” published this month by PublicAffairs press.

In it, the two scholars contend that pumping up public investment in science would create not only overall growth but also better jobs throughout the economy, in an era when stagnating incomes have caused strain for a large swath of Americans.

Indeed, spurring growth across the country is a key theme of “Jump-Starting America.” Technology-based growth in the U.S. has been focused in a few “superstar” cities, where high-end tech jobs have been accompanied by increased congestion and sky-high housing prices, forcing out the less well-off.