Click on the "screen" icon (lower right on the above frame) to view in "full screen" mode.

"This project by Ivy Li ’20 (Literature and Physics) translates part of Edmund Spenser's 16th century The Faerie Queene into the modern medium of comics, making shapely narrative from a part of the poem that used to be considered incoherent and obscure. Ivy also makes sure you get the jokes!"

A comic about forgotten heroes
Commentary by Mary Fuller, Professor of Literature, and Head, MIT Literature

Edmund Spenser’s The Faerie Queene is a book-length poem by a contemporary of Shakespeare that combines national epic, chivalric romance, and moral allegory. From 1596 on, Spenser’s readers have been interacting with the poem to produce new paratextual material: tools to navigate and understand the text, adaptations in other genres and media, additions to a work that is both massive and notoriously unfinished. In 21L.709, we spend a semester reading this “lit brick” — and final projects follow in this tradition of active reading.

This project by Ivy Li (S.B. ’20, Physics and Literature) translates part of FQ’s 4th book into the modern medium of comics. Using roughly a tenth as many words as the original, it makes shapely narrative from a part of the poem that used to be considered incoherent and obscure.

Ivy also makes sure you get the jokes: Book 4’s theme is friendship, but the knights of Friendship who should be its heroes are characters no one remembers, including Spenser — they disappear less than halfway through “their” book. A tournament aims to resolve persistent, unfriendly conflict over status by identifying the bravest knight and fairest lady, then giving her to him as a prize: but the bravest knight is a woman, the fairest lady an android. The knight ditches the lady, who finally gets to choose: and the worst man wins.

When the conventions of chivalric narrative fall apart, you can’t root for the heroes — so what Ivy framed was “not a comic about the big heroes, but about the forgotten ones.” A workshop on visual storytelling with Mauricio Cordero supported projects like this one; he teaches a CMS/W class on comics.

But if drawing a comic sounds easy, this one took upwards of 70 hours (after reading the poem): a heroic task in itself! 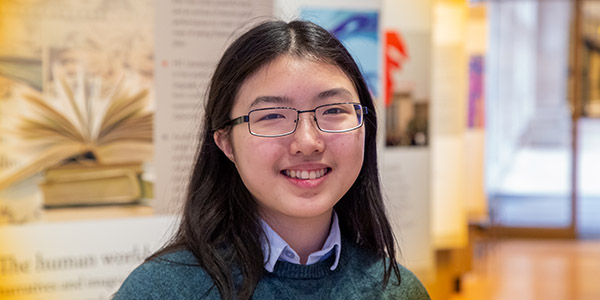 "Since childhood, I’ve been passionate about comics because they tell rich stories by blending elements of different media. Requring the skills of a playwright and a cinematographer, the comic book medium sits snugly at the intersection between text and visual art."

Classical allusions and obsolete language obscure the wonderfully strange world of Edmund Spenser’s The Faerie Queene. The epic poem is essentially an alternate-universe fanfiction of King Arthur before he was king: a virtuous man is destined for glory...but he needs to wander a bit first.

Spenser chooses not to focus on Arthur’s quest. Instead, we meet countless knights and ladies and monsters and allegorical figures in the mystical, illogical Faerie Land, written in six books, each with twelve cantos of dense poetry. Because of time constraints, I had to be selective when choosing which part to adapt for my final project. I selected the two cantos from Book 4 that feature a tournament and a beauty contest, with the benefit of a clear beginning and ending.

Since my childhood, I’ve been passionate about comics because they tell rich stories by blending elements of different media. They require the skills of a playwright: comics need dialogue and staged conflicts. They require the skills of a cinematographer: comic panels are like a film storyboard with the boring bits cut out. Thus, the comic book medium sits snugly at the intersection between text and visual art.

Before MIT, I had created art for many years. At MIT, I have done some illustration and comic strip work for The Tech, but I have never worked on something of this length and scale. I was excited yet nervous for my first full page comic project.

"The epic poem is essentially an alternate-universe fanfiction of King Arthur before he was king: a virtuous man is destined for glory ... but he needs to wander a bit first."

— Ivy Li, on The Faerie Queene, by Edmund Spenser

The art of comic book writing

In my freshman fall, I took the wonderful class 21W.744 (The Art of Comic Book Writing), with Marjorie Liu, where I wrote comic scripts and was exposed to a variety of comic works. The skills from her class along with my previous illustration experience helped me translate Spenser’s poetry into a comic script with dialogue, and then go on a two-week drawing binge with my fountain pen.

I had to make decisions on what to keep and what to cut. Some things inevitably won’t make sense unless the reader is familiar with the original, but I hope those moments were few enough that anyone could read this comic and understand what was going on. I experimented with page layouts and worked on character designs. I found image references of horses and knights, practiced human anatomy, and learned to draw fight sequences. There are changes I felt I could make after completing it, but at some point, I have to say, “That’s it, I don’t have more time.” The full process took around 70 hours from start to finish in the two-week period.

Creative work enriches my literature experience, bringing me greater insight in a work’s meaning. The magic of adaptation is that interpreting a work through another medium sheds an interesting perspective while maintaining the integrity of the original. I hope that the humor comes across better in comic than in poetry, and I also hope minor and unremarkable characters in the original would be more sympathetic to readers in this reimagining.

The Faerie Queen, by Edmund Spenser