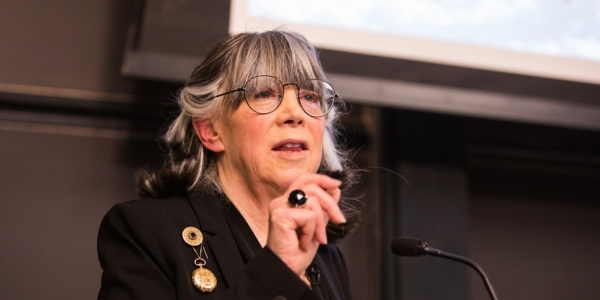 “Legality is imagined as an objective realm of disinterested action, removed and distant from the lives of individuals. This is also the law’s story about itself, of its own awesome grandeur.”

Toward the end of her Killian Lecture at MIT on Tuesday afternoon, Susan Silbey showed the audience a photo of a lawn chair on a city street, being used to save a parking spot during a snowstorm.

That’s a familiar image to Boston-area residents. But in this case, the picture had a particular symbolism. Silbey’s scholarship has helped establish a groundbreaking framework for thinking about the interaction of legal codes and civic attitudes. So when people use chairs to hold parking spots, which is illegal, it reflects one specific attitude toward the law, which Silbey helped codify: that the law is there to be negotiated, challenged, and defeated.

That is not the only view people have of the law. Some people regard the law as impartial and just, and others believe the entire legal system is oppressive. But to endure, Silbey emphasized in her remarks, a legal system cannot simply be regarded as being “outside of everyday life. … It must be located as securely within, to be powerful, to be effective, to be a rule of law.”

And, she added, “it must be experienced in property relations, in market exchanges, in contracts … and in chairs, holding parking spots in newly shoveled, snowy streets.”