THE MEANINGS OF MASKS

MIT professor and theater designer on masks as archetypes, the performance of self, and care for others

L to R: Mask of Yuya, heroine of Noh plays; Courtesy of the UBC Museum of Anthropology, Vancouver Canada (MOA N2.816); Illustration, Yuya in a scene from a Noh play

“In Japanese Noh theater masks obscure the mortal dimension of the wearer in order to stir the imagination of the audience."

SERIES | THE MEANINGS OF MASKS

As The Washington Post has reported, "at the heart of the dismal US coronavirus response" is a "fraught relationship with masks." With this series of commentaries — inspired by ideas from Associate Professor of Literature Sandy Alexandre — MIT faculty explore the myriad historic, creative, and cultural meanings of masks. One common denominator: that in this pandemic era, wearing a mask means: "I care about you." We hope these insights offer more ways to appreciate and practice protective masking — currently a primary way to contain the Covid-19 pandemic.

Sara Brown is an Assistant Professor for MIT Music and Theater Arts and the Director of Design for the MIT theater program.  Her set designs have been seen in theaters from New York to Paris, including at the BAM Next Wave Festival in New York City, The American Repertory Theater in Cambridge, and Trinity Repertory Company in Providence, RI.  SHASS Communications interviewed Brown in July 2020.

Q: Humans use masks for a variety of purposes, ranging from protection to play to artistic performance. Can you provide some interesting examples of masks and masking drawn from your discipline.

Brown: A performer in a mask is obscuring one identity in order to embody another one. Often, masks have meanings that can be instantly understood by an audience familiar with the specific codes embedded in a particular theater form. In Japanese Noh theater, for instance, a mask is worn by the shite, or principle character, and can indicate the character’s age, gender, and if the character is human or divine. Though the masks are static and cover the entire face, the skilled performer can invoke a range of expression through changing the mask’s orientation and relationship to light. These masks obscure the mortal dimension of the wearer in order to stir the imagination of the audience.

Like Noh theater, masks used in performance contexts rely on semiotic systems to connect a performer to communally understood ideals or archetypes. By contrast, masks were not used in Realism, a theater movement that arose in the mid-19th century that aspired to “realistically” reproduce the world on the stage. This form coincided with the rise of psychology as a science and interest in the unconscious mind. Realism asks the audience to see the performer as an individual rather than utilizing a mask as a communally recognizable sign. 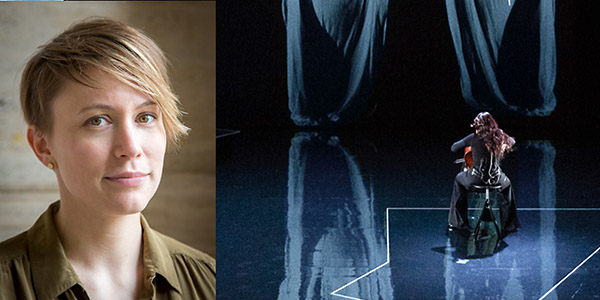 “How we can utilize the expressive power of masks? I’m interested in hearing from MIT students as to what affiliations or meanings they would want their masks to communicate. I trust our inventive students will have dozens of ideas for creating their own masks.”

Q: Given this history, can you speculate on ways in which people today might explore the creative possibilities of masks that are needed for protection from the virus?

Brown: If we think of masks as veiling individuality, we can consider how this might affect a person’s performance of self in the public sphere. After I began wearing a mask, something I had not done in my pre-pandemic life, I’ve become aware of how it affects my engagement with the world. For example, it has made me aware of how often I smile at strangers in public. This reflex bears no connection to my emotional state but is an expression that I wear as a mask – a mask intended to meet the unspoken (and sometimes spoken) expectation that women ‘smile.’ Wearing a mask has relieved the social pressure constantly perform an acceptable female expression in public.

At the same time, wearing a mask has prevented me from being recognized by neighbors and makes communication difficult. Connections that were instantaneous now require explanation (It’s Sara from Unit 13!). Unlike the theatrical masks I described, the plain protective masks do the work of erasing the individual features but do not add semiotic meaning since there is not a shared code to communicate information.

As we encourage masking at MIT, it’s worth considering how we can utilize the expressive power of masks. I’m interested in hearing from MIT students, for example, as to what affiliations or meanings they would want their masks to communicate. Colors, shape, and insignias, perhaps, could be used to communicate class year, major, residence hall, mood, etc. I trust our inventive students will have dozens of ideas for creating their own masks. No matter what form it takes, wearing a mask during the pandemic shows that you care about protecting others, including all members of the MIT community. 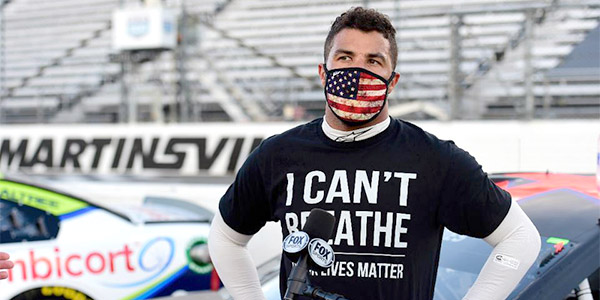 "Race car driver Bubba Wallaces' mask and t-shirt made the visual case that caring for one’s fellow citizens and political protest are two of the most patriotic things a person can do."

Q: What is the favorite mask you have ever worn, or seen someone else wear? Why did it appeal to you?

Brown: My favorite mask was worn by Bubba Wallace, a Black race car driver who led a campaign to ban Confederate flags from NASCAR races. As he was interviewed about NASCAR’s announcement that it would ban the flag at its races, he wore an American flag mask along with a shirt emblazoned with the words “I Can’t Breathe/Black Lives Matter.” His outfit in the context of stock-car racing – an overwhelmingly white sport – subverts the narrative that mask wearing and the Black Lives Matter protests are somehow un-American. His outfit made the visual case that caring for one’s fellow citizens and political protest are two of the most patriotic things a person can do.

Noh
Nō, derived from the Sino-Japanese word for "skill" or "talent," is a major form of classical Japanese dance-drama that has been performed since the 14th century.

The Next Act for MIT Theater