How door-to-door canvassing slowed an epidemic

Study finds that in Liberia, trusted volunteers limited damage from Ebola by distributing information within their own communities. 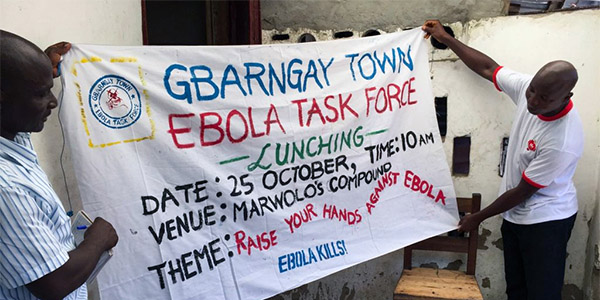 Residents hold a sign announcing a neighborhood meeting as part of Liberia’s effort to stop the spread of Ebola, in October 2014. Photo by Lily Tsai.

Research and Perspectives for the Pandemic
Main Page | Healthcare

"Liberia was the epicenter of a high-profile Ebola outbreak in 2014-15, which led to more than 10,000 deaths in West Africa. But for all the devastation the illness caused, it could have been worse without an innovative, volunteer-based outreach program Liberia’s government deployed in late 2014.

"Now, a study co-authored by an MIT professor shows how much that program, consisting of door-to-door canvassing by community volunteers, spread valuable information and changed public practices during the epidemic. The findings also demonstrate how countries with minimal resources can both fight back against epidemics and gain public trust in difficult circumstances.

“'Mediated [volunteer-based] government outreach had a positive impact on all of the [health] outcomes we measured,' says Lily Tsai, a professor of political science at MIT and co-author of a new paper detailing the study’s findings. 'People knew more [about Ebola], had a more factual understanding of the epidemic, and were more willing to comply with government control measures. And downstream, they’re more likely to trust government institutions.'

“'A large part of what worked was that the outreach workers made it possible for the people that they were canvassing to track them down,' Tsai says. 'That’s a pretty big commitment, what we call a "costly signal." Costly signals help build trust, because it’s not cheap talk.' Ultimately, while Ebola took a significant toll in Liberia, the volunteer campaign was 'remarkably (and surprisingly) effective' in changing both behavior and attitudes, the paper concludes."