THE MEANINGS OF MASKS 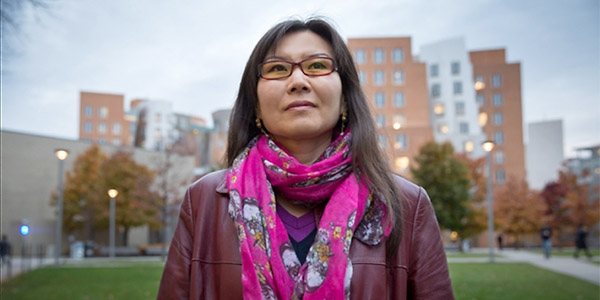 "In shamanic rituals and in computer-mediated virtual reality, a mask conceals one identity to reveal new possibilities. Seen in this light, virus protection masks offer an opportunity to replace a visage of fear with a public expression of strength as a community."

SERIES | THE MEANINGS OF MASKS

As The Washington Post has reported, "at the heart of the dismal US coronavirus response" is a "fraught relationship with masks." With this series of commentaries — inspired by ideas from Associate Professor of Literature Sandy Alexandre — MIT faculty explore the myriad historic, creative, and cultural meanings of masks. We hope these insights offer more ways to think about and appreciate protective masking — currently a primary way to contain the Covid-19 pandemic.

Manduhai Buyandelger is an associate professor of anthropology at MIT, where her research centers on how people rebuild their lives, selves, and social worlds in the wake of dramatic political transformation. She is the author of Tragic Spirits: Shamanism, Gender, and Memory in Contemporary Mongolia and is at work on a new book about women entering politics in Mongolia. SHASS Communications spoke with Buyandelger in late July 2020.

Q: Humans use masks for a variety of purposes, ranging from protection to play to artistic performance. Can you provide some interesting examples of masks and masking drawn from the discipline of anthropology?

Buyandelger: Masks are widely used to create alternative realities; examples range from traditional shamanic rituals in Inner Asia to computer-mediated virtual reality (VR) creations anywhere in the world. Such creative masks help wearers to suspend their everyday identities and assume new ones. The dark swinging tassels of the Mongolian shamanic headdress, for instance, obscure the face of the shaman during spirit-possession rituals as the practitioner improvises personae from a distant past. Audiences must construct the identities of the spirits through the performance of the mediating shaman — who is simultaneously familiar and strange.

Something similar takes place in virtual reality, where the VR headsets create alternative spaces that give users the chance to try on diverse identities, anything from diva to piglet. In my class 21A.529/Virtual and Other Realities which I taught this past spring, my students learned that these roles are just as symbolically loaded in VR as they are in everyday life; they often play an outsized role in the path a person can take. More, VR artists who strive to separate their work from commercial VR creations, also turn to ritual masks. Matthew Ritchie, who works with a variety of media, for instance, added improvised masks on top of the VR headsets thus marking the disjuncture and mobility at once. His spectators would enter the VR-mediated technological space along with the ritualized sacred world.

Alternative worlds provide experiential and experimental spaces in which societies explore issues and share insights in a safe, impersonated way — outside of everyday experience. Hence, a mask often conceals one identity to reveal new possibilities. Seen in this light, virus protection masks offer an opportunity to replace a visage of fear with a public expression of strength as a community. Thus masks become pragmatic and expressive socio-cultural tools for societies and individuals to move forward in confidence. 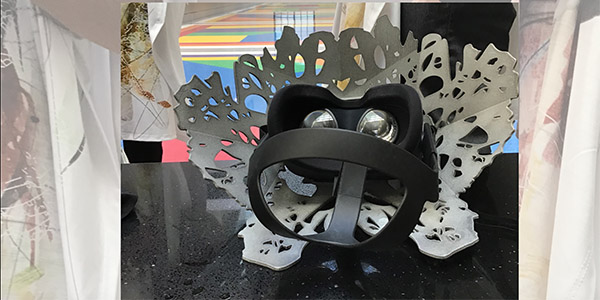 Q: What do you make of the controversy that has emerged in the United States about the wearing of masks for Covid-19 protection?

Buyandelger: The resistance to wearing a mask for public health purposes in the United States reveals — in addition to political, racial, and gender problems — the degree to which Americans are accustomed to conditions and resources that are not easily accessible in other parts of the world. In Mongolia, where I grew up, a continental climate and high altitude make temporary face coverings or masks an essential part of everyday life. Wearing scarves to protect our faces from frostbite in sub-zero winters or from summer desert dust storms is a normal part of living in Mongolia.

As a student at the National University in Mongolia, I helped with fall harvests in wheat and potato farms in September in the early 1990s. Both men and women wore cotton gauze masks and bandanas as dust protection. But we were also protecting our complexions from scorching grassland sun because we had no access to chemical sunscreens. In the 2000s, with rapid urbanization, desertification, and expansion of mining, the air quality in the capital city of Ulaanbaatar and elsewhere in the country had deteriorated and air-filtering masks became an absolute necessity, like in many other parts of the world. 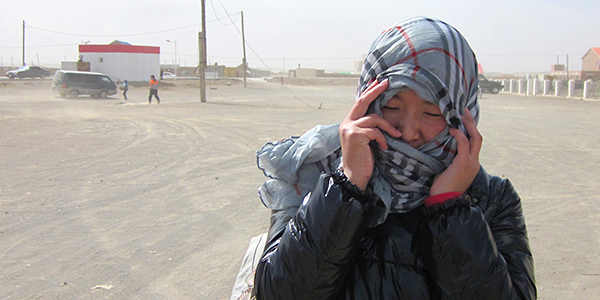 Woman talking on a cell phone during a desert sandstorm in Mongolia; photo by Lauren Bonilla

"The resistance in the US to wearing a mask for public health purposes reveals the degree to which Americans are accustomed to conditions not easily accessible in other parts of the world."

Q: As a scholar of culture, how do you think Americans might get past their political divide to normalize mask-wearing for health purposes?

Interestingly, the modern-day gauze mask had its own struggle for existence. In Neither Donkey nor Horse: Medicine in the Struggle over China's Modernity, Sean Hsiang-lin Lei describes how Dr. Liande Wu designed gauze masks as a protection from the pneumonic plague that struck Manchuria in 1910. Many foreign doctors, however, disregarded Dr. Wu’s analysis of the plague’s airborne transmission. Dr. Gérald Mesny of France was especially dismissive of Wu’s finding; he did not believe in the scientific capabilities of a “Chinaman” and went to the hospital without a mask only to die a few days later. It goes without saying that there is no point in repeating such a history of denial.

What this story illustrates, however, is the degree to which cultural acceptance is necessary to drive the adoption of a new behavior. So, what typical American practices could be harnassed to normalize masks? I think the consumer market could prove useful here.

I have been waiting for purveyors of haute couture and fast fashion — who like to be seen as liberal and progressive — to take up mask promotion. Today, consumption practices and the actions of the marketplace remain a primary scaffolding of everyday life in the US. So, what if mainstream clothing stores started selling masks as a part of a garment set? Elsewhere, designers and consumer practices have transformed the hijab into an aesthetic canvas, paradoxically making an object of modesty into an expression of personal choice and style. Perhaps consumerism, a defining feature of American culture, can save lives and help tame the pandemic by transforming masks into a mode of self-expression. 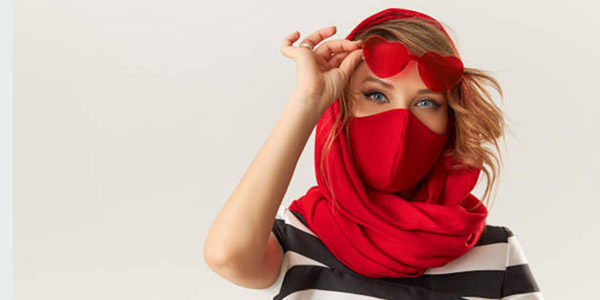 "Cultural acceptance is necessary to drive the adoption of a new behavior. What typical American practices could be harnessed to normalize masks? I think the consumer market could prove useful. I have been waiting for purveyors of haute couture and fast fashion to take up mask promotion — saving lives by transforming protective masks into a mode of self-expression."

Q: What is the favorite mask you have ever worn, or seen someone else wear? Why did it appeal to you?

Buyandelger: Soon after the pandemic began this spring, I called Dusanka Pavlovic, a friend of mine who is a fashion designer and a seamstress, and offered to purchase some masks from her. A migrant with very modest resources, she had already donated countless masks to various vulnerable communities, and she also insisted on giving me some masks as a gift. I wear her masks as a symbol of generosity, care, and friendship.

Another friend, Melody, sent me some masks with a note that said, “When you get these masks, you should have also received face shields. Now put them on and go out and about and have a good time!” Her masks are black with large white playful smileys. “Smile!” these masks signal to the world. And a third friend, Ariunaa, gave me a set of very protective N95 masks.

Meanwhile, I was also sending masks to friends in need across the country. My experience with these four sets of masks, all of which circulated as gifts, is a reminder that the dominant social semiotics of masks does not have to be political; it can be personal — a sign that there are people who care for you as much as you care for others. 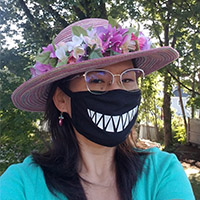 Professor Buyandelger in a "smile mask" from a friend

Series: The Meanings of Masks

The surprising story of Mongolian shamanism
Buyandelger finds that after Soviet domination, a rebirth of shamanism helped Mongolia rewrite its own history.

Anthropologist Manduhai Buyandelger wins Levitan Prize in the Humanities
The research grant will support an ethnographic study of parliamentary elections in Mongolia.