Doomsday scenarios abound, but the next president will be decided by the voters. Not the courts, not congress

Despite how tempting it will be for President Trump’s team to use all the tools at its disposal to hold onto power, writes Charles Stewart III, in the end, the election will be decided at the ballot box. 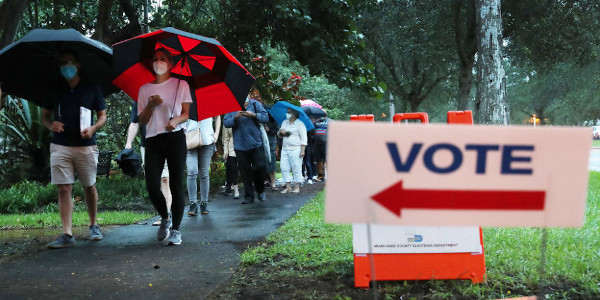 Research and Perspectives for the Pandemic
Main Page | Election 2020

Every passing day makes it seem more likely that Donald Trump will be a one-term president.

With two weeks to go before Election Day, Joe Biden is comfortably ahead in national opinion polls, and is leading in enough battleground states to make him the clear frontrunner to win the Electoral College.

Given these political realities, the failure of President Trump to commit to a peaceful transfer of power has caused alarm among Democrats, and many Republicans, too.  It raises the question of the lengths to which Trump might go to hold onto power in the face of a clear electoral defeat. In the extreme case, he might refuse to leave the White House, even following a decisive loss in the Electoral College. More likely, though, his campaign might attempt to navigate the narrow channels that the Constitution and state laws have left open.

Despite how tempting it will be for President Trump’s team to use all the tools at its disposal to hold onto power — including tools that have never been tried before and are of dubious constitutionality — in the end, the election will be decided at the ballot box.

Vote counting is highly rule-bound, with election officials more interested in accuracy than anything else. Judges, too, have little patience for bad-faith pleadings and for getting in the way of elections that have been run by the established rules.

Fair Elections During a Crisis