Profile of Christine Soh '20
With majors in CS/Engineering and Linguistics Soh is prepared to make new tools in computational linguistics. 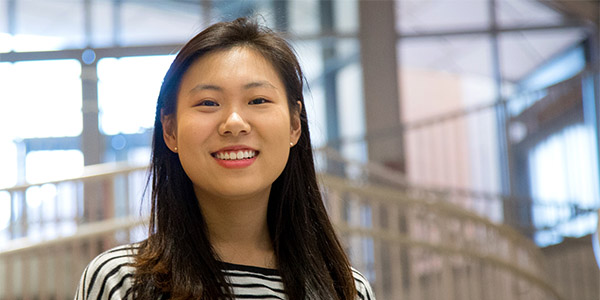 “It’s really interesting to think about how we understand language. How is it that computers have such a hard time understanding what we find so easy?”

Christine Soh ’20 fell in love with MIT the summer before her senior year of high school while attending the Women’s Technology Program run by MIT’s Department of Electrical Engineering and Computer Science. That’s when she discovered that learning to program in Python is just like learning a new language — and Soh loves languages.

Growing up in Colorado, Soh spoke both English and Korean; she learned French and Latin in school. This June, Soh will graduate from MIT where she has happily combined her passions by majoring in computer science and engineering (Course 6-3) and linguistics (Course 24). She plans to begin working toward a PhD in linguistics next year.

With fluency in both technical and humanistic modes of thinking, Soh exemplifies a "bilingual" perspective. "Dual competence is a good model for undergraduates at MIT," says engineer/historian David Mindell, who encourages MIT students to "master two fundamental ways of thinking about the world, one technical and one humanistic or social. Sometimes these two modes will be at odds with each other, which raises critical questions. Other times they will be synergistic and energizing."

The challenge of natural language and compuation

“The really cool thing about language is that it’s universal,” says Soh, who has added ancient Greek, Chinese, and the programming language Java to her credits since that summer. “I can have a really interesting conversation with anybody, even if they don’t have a linguistics background, because everyone has experience with language.”

That said, natural language is difficult for computers to comprehend — something Soh finds fascinating. “It’s really interesting to think about how we understand language,” she says. “How is it that computers have such a hard time understanding what we find so easy?”

Pairing linguistics with computer science has allowed Soh to explore cutting-edge research combining the two disciplines. Thanks to MIT’s Advanced Undergraduate Research Opportunities Program, Soh got the chance to explore whether speech analysis software can be used as a tool for the clinical diagnosis of speech impairments.

“It’s very difficult to correctly diagnose a child because a speech impairment can be caused by a ton of different things,” says Soh. Working with the Speech Communication Group in MIT’s Research Laboratory of Electronics, Soh has been developing a tool that can listen to a child’s speech and extract linguistic information, such where in the mouth the sound was produced, thus identifying modifications from the proper formation of the word. “We can then use computational techniques to see if there are patterns to the modifications that have been made and see if these patterns can distinguish one underlying condition from another.” 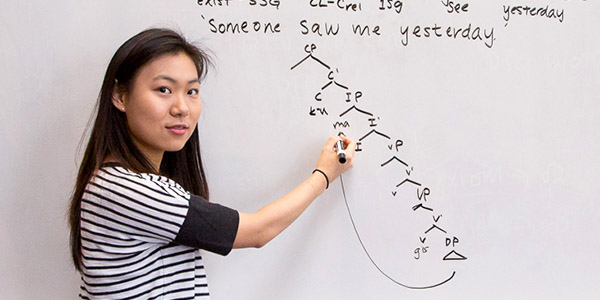 Even if the team isn’t able to find such patterns, Soh says the tool could be used by speech pathologists to learn more about what linguistic modifications a child might need to make to improve speech. In December, Soh presented a poster on this work at the annual meeting of the Acoustical Society of America and was honored with a first-place prize in her category (signal processing in acoustics).

Exploring such real-world applications for computational linguistics helped inspire Soh to apply to doctoral programs in linguistics for next year. “I’ll be doing research that will be integrating computer science and linguistics,” she says, noting that possible applications of computational linguistics include working to improve speech recognition software or to make machine-produced speech sound more natural. “I look forward to using the knowledge and skills I’ve learned at MIT in doing that research.”

“Christine’s unique interests, energy, and deep interests in both linguistics and computer science should enable her to accomplish great things,” says Suzanne Flynn, a professor of linguistics who has had Soh as a student. “She is a natural leader.”

From field methods to neurolinguistics

Looking back at her time at MIT, Soh recalls particularly enjoying two linguistics classes: 24.909 Field Methods in Linguistics, which explores the structure of an unfamiliar language through direct work with a native speaker (in Soh’s year, the class centered on Wolof, which is spoken in Senegal, the Gambia, and Mauritania), and 24.906 The Linguistic Study of Bilingualism.

In the latter class, Soh says, “We looked at neurolinguistics, what’s happening in the brain as the bilingual brain developed. We looked at topics in sociolinguistics: In communities that are bilingual like Quebec, what kind of impact does it have on society, such as how schools are run? …. We got to see a spectrum of linguistics. It was really cool.”

Outside class, Soh says she found community at MIT through the Asian Christian Fellowship and the Society of Women Engineers (SWE), which she served last year as vice president of membership. “SWE has also been a really awesome community and has opened up opportunities for conversation about what it means to be a woman engineer,” she says.

Interestingly, Soh almost didn’t apply to MIT at all, simply because her brother was already at the Institute. (Albert Soh ’18, is now a high school teacher of math and physics.) Fortunately, the Women’s Technology Program changed her mind, and as she nears graduation, Soh says, "MIT has been absolutely fantastic.”