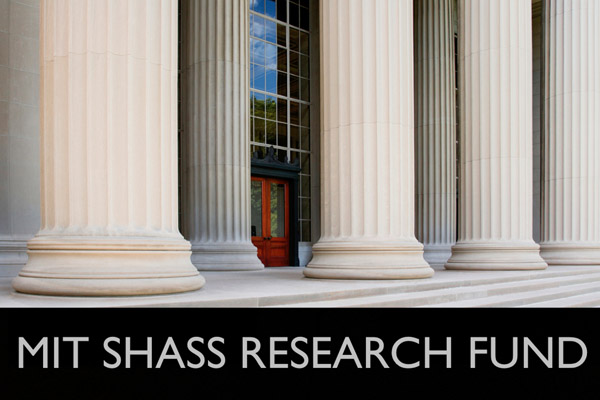 The SHASS Research Fund supports MIT research in the humanities, arts, or social sciences that shows promise of making an important contribution to the proposed area of activity.

Congratulations to the 2020 Recipients

Vivek Bald | Associate Professor, Comparative Media Studies
Bald will use the SHASS Research funding to continue prodction on "The Lost Histories Project," an online interactive platform where Bald will host his research on his ongoing project Bengali Harlem. This project, which Bald has been developing since 2004, tells the histories of two groups of South Asian Muslim immigrants who came to the United States during the Asian Exclusion era and “disappeared” into working class African American and Puerto Rican communities in New York, New Orleans, Detroit, and elsewhere.
Vivek Bald's website

Charlotte Brathwaite | Associate Professor, Theater Arts
SHASS research funding will support Brathwaite and her team's travel to Senegal to enrich the development of two projects: a feature-length documentary film Forgotten Paradise: Grazettes Sun and Omar, a new opera by Rhiannon Giddens. The Fund will support travel as Brathwaite and her team journey to the region to shoot footage and witness the Abene Festival and interview local artists and scholars.
Charlotte Brathwaite's website

Manduhai Buyandelger | Associate Professor, Anthropology
The long history of invention of alternative worlds, from ancient theaters to rituals of spirit worship, from literature to cinemas, has now materialized in today’s digital technology, specifically, in virtual and augmented realities (VR and AR), among others. In this project Buyandelger will expand the scholarship on the rich genealogy of created worlds that allow one to experience being someone else with an ethnographic study of the development of VR and AR in universities on the East Coast of the United States with MIT as the main base.
Manduhai Buyandelger's website

Mark Harvey | Senior Lecturer, Music and Theater Arts
Harvey is developing new CD recordings of his original compositions for jazz orchestra. The Fund will allow the jazz world and a wider public to hear Harvey's latest musical research as performed by the Aardvark Jazz Orchestra with whom Harvey has evolved an aesthetic of conducted and collective improvisation within complex notated structural frameworks.
Mark Harvey's website

Norvin Richards | Professor, Linguistics
Richards will bring a group of students to spend a week near a Maine community in which the endangered Passamaquoddy language is still spoken. Among Richards's specializations are endangered languages, the Wôpanâak Language Reclamation Project, any of various issues in the syntax of Tagalog or other Austronesian languages.
Norvin Richards's website

Frank Schilbach | Gary Loveman Career Development Assistant Professor of Economics
The WHO recently declared that depression is the leading cause of disability worldwide. Schilbach and his colleagues will will conduct new surveys in India and collect experimental data to measure the impact of intervention on three broad sets of outcomes: (i) long-run mental health; (ii) economic well-being including labor supply, earnings, savings, and consumption; (iii) beliefs and information processing, as well as social, risk, and time preferences.
Frank Schilbach's website

Christine J. Walley | Professor, Anthropology
What does it mean to be “working class” in the 21st century United States, a period marked by two phenomena: first, a realignment of class dynamics linked to growing inequality and increasingly precarious forms of labor and, second, Trump’s resurrection of the white male industrial worker as symbolic of the American “working class” in ways that occlude the racialized and gendered components of being working class in both the past and present?  The SHASS Fund will support Walley's academic research relating to an early stage book manuscript entitled, Haunted Brownfields, that seeks to explore these transformations.
Christine J. Walley's website

MIT's Mission in the Humanities, Arts, and Social Sciences

About the SHASS Research Fund

The Power of the Humanities, Arts, and Social Sciences at MIT