How should food safety be determined?

The U.S. government forbids the sale of raw milk cheeses aged under 60 days. Artisan cheesemakers say this rule is arbitrary and may compromise the integrity of their products. Anthropologist Heather Paxson explores the issues of safety and quality in our food.

The Culture of Cheese
The making of cheese was once an ordinary household task, part of everyday life for rural Americans. But with the advent of pasteurization and industrial methods, by the early 1900s cheesemaking had moved from farmhouse to factory.

A Renaissance
Yet today, artisan cheesemaking is undergoing a renaissance in the United States. The number of artisan producers has more than doubled since 2000, to nearly 500. Many newcomers are entering the business, at least in part for philosophical reasons: to preserve pastureland, care for sheep or goats, provision a local food shed, or eat healthier.

Artisan Producers and Big Agriculture
Anthropologist Heather Paxson investigates who today's cheesemakers are and what motivates them to assume the economic risk and backbreaking labor of this low-tech enterprise. She is finding a passionate, and far from homogenous, group of small producers who collectively face the challenge of competing with big agriculture.

Regulation and Choice
This group coalesced in the 1990s, concerned over the U.S. Food and Drug Administration's consideration of a ban on all raw (unpasteurized) milk cheese. The proposal died, but issues continue, as regulations treat all cheeses alike, despite such critical differences (in terms of bacteria growth) as moisture levels and acidity, Paxson says.  The USFDA regulations also typically treat all businesses alike.

A Fine Line
The USFDA believes it is fulfilling a vital public mission to protect citizens from food-borne illness. Artisan cheesemakers believe that good (even great!) cheese is being kept off the American table. Paxson's research reveals the unsettled relationship between what we, rightly, want government to protect us from, and what we may want to choose for ourselves. 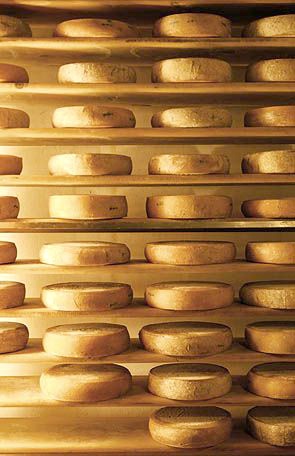