The ethical challenges presented by climate change and the question of what individuals — and academic institutions like MIT — can do to effect change drew approximately 250 people to Morss Hall at MIT on Thursday, Nov. 17 for an MIT-wide forum titled “Climate Change: Ethics in Action.”

A question for all of us

The three-hour forum featured a keynote address by Dale Jamieson, professor of environmental studies and philosophy at New York University and author of “Reason in a Dark Time: Why the Struggle to Stop Climate Change Failed — and What It Means for Our Future,” followed by dinner and a panel discussion among five scholars in fields ranging from atmospheric science to philosophy.

Introduced by Melissa Nobles, the Kenan Sahin Dean of the School of Humanities, Arts, and Social Sciences, Jamieson reinforced this idea, beginning his talk by outlining the history of climate science, from Joseph Fourier's 1824 discovery that the atmosphere traps heat, to the present day. Among the growing body of evidence he cited was a 1979 study by the National Academy of Sciences that said, “A wait-and-see policy may mean waiting until it's too late” — which, Jamieson added, “is pretty much the policy that has been followed.” 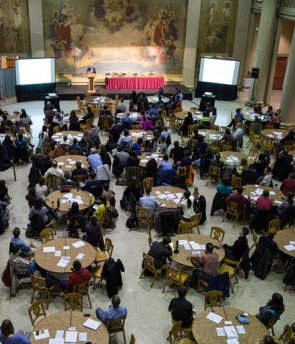