Who are the South Asian Americans?

Doors Opening
In 1965, the Hart-Cellar Immigration and Naturalization Act rewrote the rules determining who could legally immigrate to the United States. The legislation opened the doors to a major migration from South Asia (India, Pakistan, Bangladesh, Sri Lanka, and Nepal) that was dominated by highly educated professionals.

More Stories to Tell
This group of immigrants has become the dominant voice of America’s South Asian community, says Vivek Bald, Assistant Professor of Writing and Digital Media in the School's Program in Writing and Humanistic Studies. Following the classic American arc from ethnic enclave to suburb, their success has overshadowed the story and experiences of the working class South Asian immigrants who came before and after them, he says.

“My work seeks to offer counter-representations of who South Asians are and what their experiences have been here,” says Bald, whose previous films include Taxi-vala/Auto-biography and Mutiny: Asians Storm British Music.

A Multi-Ethnic Community
For his latest film and book project, “In Search of Bengali Harlem,” Bald is working with Bangladeshi-American performer Aladdin Ullah to explore the story of Ullah’s father Habib, a 14-year-old Indian sailor who landed in Boston in the 1920s. Left ashore by chance, he eventually settled in New York along with dozens of other South Asian maritime workers. These immigrants briefly transformed the city’s cultural landscape, creating a “really astonishing” Harlem-based community of Bengali Muslim men, African-American, Latina, and Caribbean women and their children, Bald says.

Expanding Identity and Experience
“I’m interested in what exactly happened, why this multiracial working class immigrant community existed for a generation in the form that it did,” Bald says. Through his film, Bald hopes “to challenge the hold of a very small set of mainstream media images of South Asians.”

“I want the film and the book to expand people’s idea of who South Asians are in the U.S.,” Bald says. 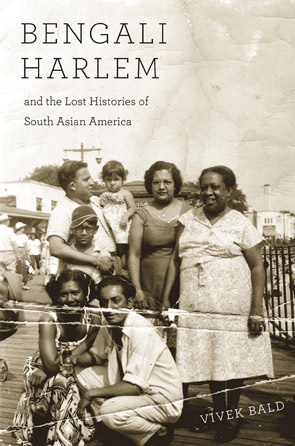