Intensively trained in the European tradition, Makan considers
Western classical music "one example of world music—no more
privileged than any other music tradition." His creative use of
multiple influences and cultural traditions is an inspiring model
at MIT, where many students in his theory and composition
classes have equally layered inheritances.

Composer Keeril Makan, Associate Professor of Music in MIT's School of Humanities, Arts, and Social Sciences, has been awarded a 2012 Fellowship from the John Simon Guggenheim Memorial Foundation for his “prior achievement and exceptional promise.”

This is the second year in a row that a faculty member in Music and Theater Arts has received the Guggenheim. Last year, Associate Professor of Theater Jay Scheib received the award, which honors mid-career professionals who have “demonstrated exceptional capacity for productive scholarship or exceptional creative ability in the arts."

Janet Sonenberg, Professor of Theater, and Head of Music and Theater Arts at MIT, says she was delighted to learn of Makan’s award. “Keeril's compositions are thoroughly modern, original, uncompromising and beautiful. Everything about them is essential, and I am often taken by surprise by what comes next, while at the same time experiencing it as necessary.”

Taking it to the next level
Described by The New Yorker as “an arrestingly gifted young American composer,” Makan received the fellowship to support his work on a new composition for Either/Or, a contemporary music ensemble that focuses on presenting unconventional works. He was one of 181 candidates chosen to receive Guggenheims this year from a group of almost 3,000 applicants.

In the past, Makan has received commissions from Bang on a Can All-Stars, American Composers Orchestra, Harvard Musical Association, and Carnegie Hall. However, he said the new work will be his first evening-length piece for a small ensemble. “Most of the chamber music I’ve written has been part of a program, just 10 to 15 minutes long. I really wanted to do something more substantial,” he said. “We’ll be taking it to the next level.”

Makan describes himself as a classical musician
working in the context of minimalism and of musical
experimentation that embraces non-western influences,
popular music, and technology. Listen to Makan's
music on his website.

Openness and Experimentation
Makan worked with Either/Or on his most recent CD, Target, which came out in August, but said the Guggenheim piece will be the first time he has composed for the group; he has not yet determined what the work will be about. “It’s an important part of my process not to know,” he said. “I tend to approach each piece with a sense of experiment and an awareness of where I am in my life. I try not to predetermine too much.”


Earlier Awards
Trained as a violinist, Makan received degrees in composition and religion from Oberlin and completed his PhD in composition at the University of California–Berkeley. He joined the MIT faculty in 2006 and received the prestigious Luciano Berio Rome Prize for musical composition from the American Academy in Rome in 2008. He has also received awards from the American Academy of Arts and Letters, the Fromm Foundation, the Gerbode Foundation, and the Hewlett Foundation.

He said his time at MIT has had a profound impact on his work. “Both in graduate school and while teaching at the University of Illinois, I had more of a focus on noise, the expressive potential of sounds that are unusual. Over the past six years, I’ve been broadening the scope of what I do. I’m still interested in unusual sounds but balanced with more traditional, classical materials, which allows for more emotional range,” he said.

This change in style is chronicled in his upcoming CD, Becoming Unknown, performed by the International Contemporary Ensemble and due out early next year.


New Works
Makan said that while he has already begun sketching ideas for the Guggenheim work, he won’t get started in earnest until he begins his fellowship year in January. In the meantime, he has other projects to work on—notably putting the finishing touches on an opera he is working on with Scheib. Called Persona, it’s an adaptation of an Ingmar Berman movie of same name. Scheib wrote the libretto and is directing the piece for Alarm Will Sound. Alan Pierson, a 1996 MIT graduate in Music and Theater Arts and Physics, will conduct the opera when it premieres.


Performances | Spring and Fall 2012
Those interested in hearing a Makan composition may wish to attend a performance at the Moonshine Room at Club Café in Boston on April 30, which will feature his solo cello work “Zones d'accord.” Or, plan ahead for the October 24 world premiere of a new work for the Pacifica String Quartet at Pickman Hall of the Longy School of Music of Bard College, part of the Celebrity Series of Boston. 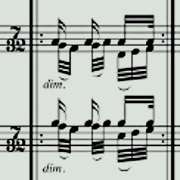