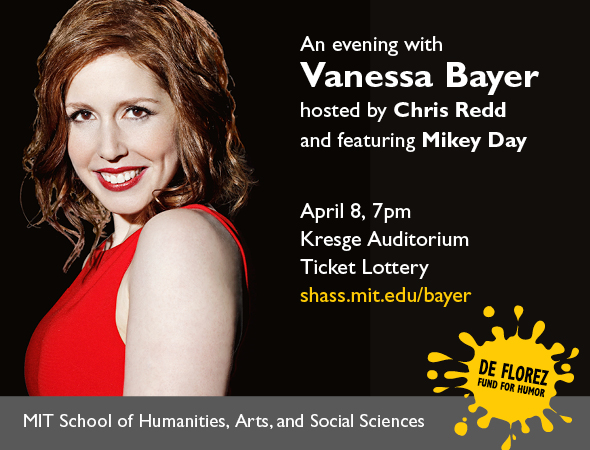 Click here to enter the ticket lottery
by 11:59 pm on Tuesday, April 3

Note: Everyone in the lottery to receive John Mulaney tickets will have the chance to receive tickets to see Vanessa Bayer

Due to an unforeseen last-minute television commitment, we have to cancel John Mulaney’s performance on April 8 at MIT. But don't despair! We have been able to book one of the funniest comedians working today, SNL-alumnus Vanessa Bayer, for that same evening.

Vanessa will be joined by two current SNL cast-members, Chris Redd and Mikey Day, for what promises to be an unforgettable evening.

Bayer is also known for her roles in films such as Trainwreck, Carrie Pilby, and Office Christmas Party. She will next appear in guest roles on NBC’s Will and Grace and the third season of Netflix’s Love, and you can also see her in the upcoming Netflix film, Ibiza.

Each year, the De Florez Fund hosts two major comedy shows on campus while supporting community projects that share the virtues of good humor with MIT.

Founded in 1988 by MIT alumnus Peter de Florez ('38), the fund supports projects that “impress students with the importance of humor in all aspects of life, both personal and business.” In the words of Jay Keyser, MIT Professor of Linguistics Emeritus, “A sense of humor is to an MIT student what the magic lasso is to Wonder Woman. You can survive without it, but boy does it come in handy.”

Major grants are issued twice annually. Those seeking smaller grants—of $750 or less—may apply at any time.

MIT students, staff, and faculty who would like to attend John Mulaney's show on April 8 should enter the online ticket lottery by 11:59 pm on Monday, April 2 for the chance to receive up to two free tickets.