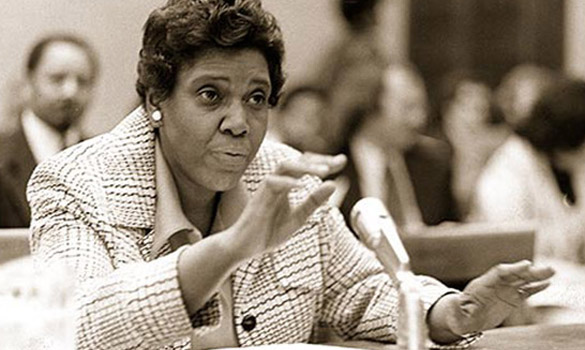 Barbara Jordan during the Watergate hearings in U.S. Senate, 1973

Barbara Jordan (1936-1996) was a stateswoman, member of the U.S. Congress from the 18th District of Texas, keynote speaker at the 1976 Nat'l Democratic Convention, and defender of the U.S. Constitution. "There was only one Barbara Jordan," said her colleague Rep. Eve Clayton (N. Carolina.) "When she spoke, we listened — the world listened.”


Recording: Barbara Jordan speaking on the Extension of the Voting Rights Act

Text: Barbara Jordan's testimony on the Extension of the Voting Rights Act, before the Subcommittee on Constitutional Rights, Senate Committee on the Judiciary, 22 April 1975


Justice | Linguistics and Philosophy
This course explores the ideal of social justice. What makes a society just? We will approach this question by studying three opposing theories of justice—utilitarianism, libertarianism, and egalitarian liberalism—each foundational to contemporary political thought and discourse.


Violence, Human Rights, and Justice | Anthropology
This course examines the problem of mass violence and oppression in the contemporary world, and the concept of human rights as a defense against such abuse. It explores questions of cultural relativism, race, gender and ethnicity.


Race, Crime, and Citizenship in American Law | History
This seminar looks at key issues in the historical development and current state of modern American criminal justice, with an emphasis on its relationship to citizenship, nationhood, and race/ethnicity.


Political Philosophy: Global Justice | Political Science
This course explores the foundations and content of norms of justice that apply beyond the borders of a single state. We examine issues of political justice, economic justice, and human rights.


Moral Problems and the Good Life | Philosophy
This course will focus on issues that arise in contemporary public debate concerning matters of social justice. Topics will likely include: euthanasia, gay marriage, racism and racial profiling, free speech, hunger, and global inequality. Students will be exposed to multiple points of view on the topics and will be given guidance in analyzing the moral frameworks informing opposing positions.


Networked Social Movements: Media & Mobilization | Comparative Media Studies/Writing
This seminar is a space for collaborative inquiry into the relationships between social movements and the media. We'll review these relationships through the lens of social movement theory, and function as a workshop to develop student projects.


Law and Society | Anthropology
Law is a common and yet distinct aspect of everyday life in modern societies. This course examines the central features of law as a social institution and as a feature of popular culture.


American Dream: Using Storytelling to Explore Social Class in the US | Anthropology
This course explores the experiences and understandings of class among Americans positioned at different points along the U.S. social spectrum. It considers a variety of classic frameworks for analyzing social class and uses memoirs, novels, and ethnographies to gain a sense of how class is experienced in daily life and how it intersects with other forms of social difference such as race and gender.