"This initiative is something that is right at the heart of what MIT stands for. We believe in solving important problems, contributing collectively wherever we can."

This non-partisan MIT initiative convenes research-informed lectures and discussions to explore major, long-term social, political, and economic issues in the U.S. We are asking: What can MIT do to help address these challenges and bolster the health of our democracy? How can we use research to inform our decisions about engagement, both as citizens and as leaders of organizations? Join us as we frame the issues and generate ideas for making a positive impact.

Moderator Derek Leist, MBA ’21, quizzed the trio on the challenges we might face in the 2020s during the panel, which was sponsored by Mens et Manus America, an MIT initiative to explore social, political, and economic challenges in the U.S. Read the five takeaways from the session.
Event story 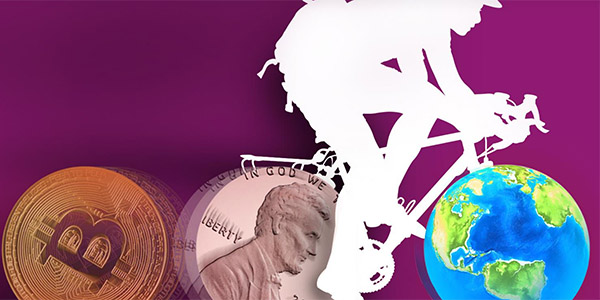 Monday, April 22, 2019
Our Towns: Journey Into the Heart of America 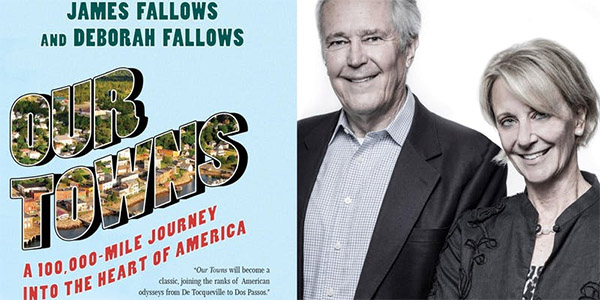 James and Deborah Fallows traveled to dozens of towns and small cities across America – places like Duluth, Minnesota and Demopolis, Alabama – and from their interviews and experiences crafted their best-selling book Our Towns: A 100,000-Mile Journey into the Heart of America. In a conversation with Barbara Dyer, Senior Lecturer at MIT Sloan and Executive Director of the Good Companies, Good Jobs Initiative at MIT Sloan, the Fallowses will discuss what they’ve learned about the surprising reinvention going on in many American communities. The discussion will be followed by questions from the audience. After the event, there will be a book signing in the Ting Foyer outside the auditorium.

James Fallows has been a national correspondent for The Atlantic for more than thirty-five years, reporting from China, Japan, Southeast Asia, Europe, and across the United States. He is the author of eleven previous books. His work has also appeared in many other magazines and as public-radio commentaries since the 1980s. He has won a National Book Award and a National Magazine Award.

Deborah Fallows is a linguist and writer who holds a PhD in theoretical linguistics and is the author of two previous books. She has written for The Atlantic, National Geographic, Slate, The New York Times, and The Washington Monthly, and has worked at the Pew Research Center, Oxygen Media, and Georgetown University.

Wednesday, April 18, 2018
The Truth about Fake News
Sinan Aral, the David Austin Professor of Management at MIT, will give a presentation on the science and implications of fake news for our democracy, politics, and country. Followed by a student-led discussion.
Event Story

Tuesday, April 17, 2018
How Does Gender Matter in Politics?
Excerpts from the play "Her Opponent," featured a male "Clinton" and a female "Trump," followed by discussion with creators Maria Guadalupe and Joe Salvatore.
Event Story 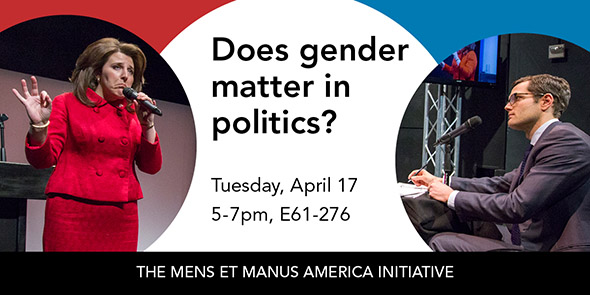 Thursday, February 8, 2018  6-8pm, E62-276
Understanding Immigration
The deadline for extending DACA looms amid larger debates about US immigration policy. How can the US achieve a fair, humane policy for accepting and integrating immigrants? Join us as Mary Waters of Harvard and Doug Massey of Princeton provide the necessary context for understanding the issues.
Event Story 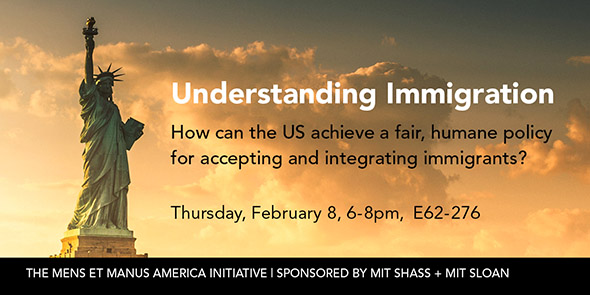 Rural America is often stereotyped as a set of regions left hopeless by economic forces beyond their control. This month, an MIT audience was asked to suspend such stereotypes and listen as four community development leaders painted a more nuanced portrait of America’s rural areas. "There’s an enormous amount of innovation across this country and a lot of strength," said Barbara Dyer, Senior Lecturer and Executive Director, Good Companies, Good jobs Initiative, at the MIT Sloan of Management.
Event Story + Video + Links to Organizations

MIT faculty members helped demystify the U.S. tax system and illuminate its possible restructuring on November 1 in a talk titled “U.S. Tax Reform: Options and Impediments.” The event took place just one day before GOP leaders in Washington unveiled a sweeping new tax reform bill. “The politics of tax reform are extremely difficult, especially if you are trying to do it in a revenue-neutral way,” said James Poterba, the Mitsui Professor of Economics in the School of Humanities, Arts, and Social Sciences (MIT SHASS). “The devil is in the details.”
Event Story + Video

President Reif's Letter regarding federal tax proposals and the MIT community
"To the members of the MIT community: The tax legislation now pending in Congress contains several provisions that could have damaging impact on members of our community and the Institute as a whole. Because the situation is complex and fluid, I write to offer our current assessment of which provisions concern us the most and why, and to let you know that MIT is actively following developments in DC and striving to achieve a better outcome. If you share our concern, you can express your views to Congressional leaders." Various concerns about the security of U.S. elections have arisen over the past two decades, some more significant that others. While many studies have shown that voter fraud, for instance, is vanishingly rare in the U.S., what about the state of electoral administration, lost votes, and cyber attacks? On Oct. 16, two experts teamed up at MIT to share insights from their research on what is and isn't working in America's electoral system.
Event Story

"The number of votes lost during collection and counting has been cut in half since 2000. 'A lot of good things have happened," Stewart said — including better voting machines, modernized registration systems, and an increase in the professionalization of election administration."

Tuesday, May 9, 2017
Breaking Through Gridlock: The Power of Conversation in a Polarized World
A conversation with Jason Jay, Senior Lecturer, MIT Sloan School

Think of the last time you tried to talk to someone about social, environment, or political issues where you didn't already agree. How well did it go? These conversations are critical for our families, organizations, and democracy, but too often get stuck. MIT Sloan Senior Lecturer Jason Jay will hold an interactive workshop based on his new book Breaking Through Gridlock, giving personalized guidance on how to get unstuck. Join us if you are ready to go beyond "preaching to the choir" and lead change across the lines.
Event Story

Monday, May 1, 2017
Can We Solve the Politics of Misinformation?
A Conversation on their research with Ezra Zuckerman Sivan and Adam Berinsky
Moderator: Agustín Rayo, Professor of Philosophy

Why do voters believe lies and questionable political claims?
In the wake of recent elections, both in the US and abroad, many observers have questioned why voters place their trust in candidates who disregard the facts and the truth. Berinsky’s recent research provides striking evidence that voters on either side of a partisan divide are apt to interpret their candidate’s false statements as true. Zuckerman’s recent research demonstrates that when voters feel that the political process is unjust, they appreciate lying demagoguery as symbolic protest.
Event Story

March 23, 2017
Strangers in Their Own Land
A Conversation with Arlie Russell Hochschild
11:30am - 1pm | Bartos Theater

Hochschild, Professor Emerita of Sociology at the University of California, Berkeley, discussed her new book, Strangers in Their Own Land: Anger and Mourning on the American Right. The talk was followed by discussion and a book signing. One of the most influential sociologists of her generation, Hochschild is the author of nine books, including The Second Shift, The Time Bind, The Managed Heart, and The Outsourced Self.
About the book | New York Times review
Event Story | Event Video

“In her attempt to climb over the ‘empathy wall’ and understand the emotional lives of her political adversaries, Arlie Hochschild gives us a vital roadmap to bridging the deep divides in our political landscape and renewing the promise of American democracy.”

“If we really want to understand why there is this expanding class inequality in the United States, one of the places we have to look is the long-term impact of deindustrialization. We have to think historically about how we got into this position and how we can come out of it.”

HOW YOU CAN PARTICIPATE

Beyond the events, you can become engaged as a member of the Mens et Manus America planning committee.

The Planning Committee consists of a small number of faculty, staff, and students who:
— Design and execute the speaker series based on input from faculty and students
— Design and execute the discussions
— Support logistics and communication efforts driven by the SHASS Dean’s Office and Sloan Student Life
— Continue to develop new ideas as the initiative progresses
— Join in weekly planning sessions Report from the Brennan Center at NYU about "vote fraud"
"It is important to protect the integrity of our elections. But we must be careful not to undermine free and fair access to the ballot in the name of preventing voter fraud... [E]xamination after examination of voter fraud claims reveal fraud is very rare, voter impersonation is nearly non-existent, and much of the problems associated with alleged fraud relates to unintentional mistakes by voters or election administrators."

Op-Ed: How to declare war on coal’s emissions without declaring war on coal communities
"The move to clean energy is imperative. In the long run, that transition will create more jobs than it destroys. But that is no comfort to families whose livelihoods and communities have collapsed along with the demand for coal. We owe something to the people who do the kind of dangerous and difficult work my grandfathers did so that we can power our modern economy."