Experts cite immigration as an engine of U.S. success, lament the human damage being done by current policies, and see signs of hope. 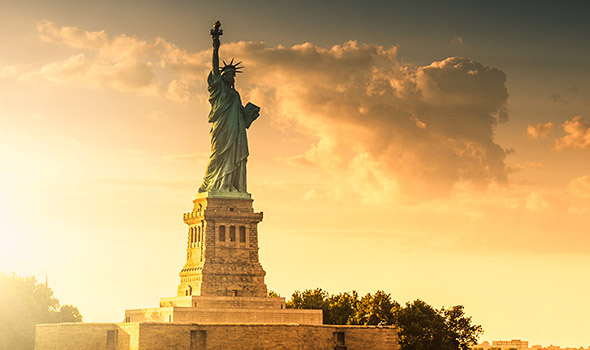 “Immigrants and their children represent one out of every four US residents. [Immigration is] an engine of our success as a society.”

Immigration from Mexico to the United States has been roughly stable for the past 10 years, and immigrants are statistically less likely to commit crimes than native-born Americans. These are just two of the potentially surprising facts shared by leading immigration experts who presented an introduction to the subject at an event at MIT on February 8.

“Understanding Immigration: How Can the US Achieve a Fair, Humane Policy for Accepting and Integrating Immigrants” centered largely on immigration from Mexico, which has been a focal point of recent policy debates in Washington. Featuring top sociologists Douglas S. Massey of Princeton and Mary C. Waters of Harvard, the event was the latest in a series sponsored by Mens et Manus America, an MIT initiative focused on the country’s social, political, and economic challenges.

“For me, watching immigration policy unfold over the last decades has been like watching a slow-moving train wreck,” said Massey, the Henry G. Bryant Professor of Sociology and Public Affairs at Princeton, who began the evening’s presentation by providing a short history of the ebbs and flows of Mexican immigration and related US policy since the 1940s.

“The great irony is that [the United States] spent $35 billion to try to stop the flow from Mexico that would have stopped of its own accord,” said Massey, who revealed that the United States cracked down even as long-term demographic shifts in the Mexican population were reducing migration.

Waters, for her part, noted that immigrants are generally a large and successful segment of American society. “Immigrants and their children represent one out of every four US residents,” said Waters, the John L. Loeb Professor and interim department chair of Sociology at Harvard University. “[Immigration is] an engine of our success as a society.”

Massey is the author of Categorically Unequal: The American Stratification System (Russell Sage Foundation, 2007) and co-author of American Apartheid: Segregation and the Making of the Underclass (Harvard University Press, 1993), among many other works. He has been researching and writing on immigration since the late 1970s and is the founder of the Mexican Migration Project, a 35-year-old binational research effort centered on understanding Mexican migration to the United States.

He told the crowd of roughly 80 people in E62-276 that from 1942 to 1964, the United States ran a guest worker program for Mexicans that facilitated the flow of labor for seasonal agricultural work. At that time, he said, most migrants were men who returned to their families in Mexico during the off-season. Then Congress changed the rules in the 1960s — motivated, according to Massey, by the desire to appear non-racist. Immigration rules for Mexico were brought in line with those for other countries, capping immigration from the Western Hemisphere for the first time, he said.

Since Mexicans still wanted to work in the United States and farms still needed workers, however, migration didn’t stop. Instead, workers came over without documentation, and the United States responded by increasing enforcement. More policing led to more apprehensions, which increased the impression among Americans that there was a problem — even though entries from Mexico leveled off after 1979, Massey said. Net migration from Mexico began to decline in 2000 and has been relatively stable for the last 10 years, he said.

The costs and risks of crossing the border escalated, however, which did stop migrants from crossing the border—just not in the way US leaders intended, according to Massey. “The border enforcement backfired,” Massey said. Mexicans began avoiding being caught at the border “not by staying in Mexico but by not leaving the United States,” he said.

“It’s very convenient for a society with huge and growing income inequality to have someone to blame that on — rather than on those taking the profits and not paying those who work for them a living wage.”

This is just one example of the gulf that has existed between the facts and American immigration policy for at least the past 30 years, both speakers agreed. “The idea that we’re going to keep people out of our country by dealing with the immigration process is really myopic,” Waters said, noting that 180 million people enter the country every year—as tourists, students, etc.—and most do not decide to remain here.

Those who do stay tend to improve American society, added Waters, who chaired the National Academies of Sciences’ committee that produced a report in 2015 titled The Integration of Immigrants into American Society. She said that research revealed that immigrants are healthier, more religious, and much less likely to commit crimes than native-born Americans.

Researchers also found that immigrants integrate well and quickly into American society. “[Immigrants] are very much a part of American society,” Waters said—and that includes undocumented immigrants, 61 percent of whom have been in the country a decade or more. Yet, undocumented immigrants don’t have the same legal rights as citizens, Waters noted. They can be arrested without probable cause, sentenced without probation, and have no right to an attorney, she said.

The author of numerous books, including Inheriting the City: The Children of Immigrants Come of Age (Russell Sage Foundation, 2009) and Ethnic Options: Choosing Identities in America (University of California Press, 1990), Waters also noted that enforcing immigration rules is expensive—costing more each year than is spent on the Federal Bureau of Investigation, the Drug Enforcement Agency, and the Secret Service combined. “Most Americans don’t know the level to which we’re acting like a police state,” she said.

Following the two presentations, first-year MBA student Xavier Vargas moderated a question-and-answer session in his role as a vice president of the Hispanic Business Club, which supported the evening’s event. Vargas noted that both sides of the immigration debate could use more empathy and asked what the speakers might say to a custodian in Tucson, Arizona — the mother of an MIT staffer — who feels overwhelmed by competition from immigrants.

Waters replied that while there will always be anecdotes about job competition, the data indicates that immigrants generally bump up wages for native-born Americans. “It’s very convenient for a society with huge and growing income inequality to have someone to blame that on — rather than on those taking the profits and not paying those who work for them a living wage,” she said.

Waters and Massey both emphasized that real human damage is being done by the country’s immigration policies — from the fear spreading through immigrant communities to families torn about by detainments or deportations.

Yet both also offered hopeful notes. Massey pointed out that the sheer numbers of immigrants in the country will likely move the pendulum toward more immigrant-friendly policies.

Waters and Massey both emphasized that real human damage is being done by the country’s immigration policies — from the fear spreading through immigrant communities to families torn about by detainments or deportations. Yet both also offered hopeful notes.

Massey pointed out that the sheer numbers of immigrants in the country will likely move the pendulum toward more immigrant-friendly policies. And Waters suggested that several factors indicate the country is moving toward better relations between natives and immigrants. Chief among these is the demographic changes that have moved immigrants into more regions of the country, increasing citizens’ first-hand knowledge of immigration issues. “I think we have a growing knowledge of immigration and a knowledge and acceptance of people in their schools and workplaces — and that’s leading to better attitudes,” she said.

Mens et Manus America is jointly sponsored by the School of Humanities, Arts, and Social Sciences and the Sloan School of Management. The Feb. 8 event was also offered in partnership with the Hispanic Business Club at Sloan. Ezra Zuckerman Sivan, Siteman professor of strategy and entrepreneurship and deputy dean of MIT Sloan, introduced the evening’s speakers. The non-partisan Mens et Manus America Initiative explores social, political, and economic challenges currently facing the United States. The initiative is co-sponsored by the MIT School of Humanities, Arts, and Social Sciences and the MIT Sloan School of Management, and is co-directed by Agustín Rayo, professor of philosophy and associate dean of SHASS, and Ezra Zuckerman Sivan, Siteman professor of strategy and entrepreneurship and deputy dean of MIT Sloan. For information about the Mens et Manus America communications contact: SHASS Communications.

PDF of the Presentation

Adam Berinsky and Ezra Zuckerman-Sivan examine The Politics of Misinformation