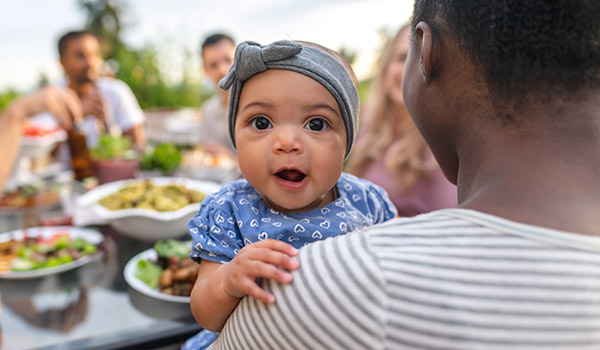 A baby with her Mum at a social gathering

"What makes linguistics, the science of language, so fascinating is that it exists at the intersection of science and the humanities. You use a scientific approach, and you get to apply it to something central to humanity."

You may also enjoy:
3 Questions with David Pesetsky on the field of linguistics
A Commentary from the MIT Linguistic Faculty on Computing and AI

How is it possible that simple acoustic vibrations, hand gestures, and even ink patterns can give one person access to the thoughts of someone else? This is the central question of linguistics.

“We put these signals in the world and others can read our mind to some extent,” says Kai von Fintel, an MIT professor of linguistics. “I find that a baffling phenomenon — why not try to figure that out?”

The following signals and patterns, which provide a brisk overview of the field of linguistics, include some entries from the Linguistic Society of America (LSA) — a destination website! — and are shared with the LSA's generous permission.

In a nutshell: Linguistics is the scientific study of language. Linguists apply the scientific method to conduct formal studies of speech sounds, grammatical structures, and meaning across the world’s 6,000+ languages. They also investigate the history of language families, how language is acquired when we are infants, and the underlying neural structures that enable us to use language.
More at LSA | The Science of Linguistics

WE ARE ALL LINGUISTIC CREATURES

“Whether it’s telling a joke, naming a baby, or using voice recognition software, you’ll find the study of language reflected in almost everything you do.”
More at LSA 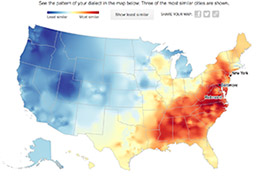 Hero, Sub, or Hoagie? | Your Personal Dialect Map
What does the way you speak say about where you’re from?
Most of the questions used in this NYT's quiz are based on those in the Harvard Dialect Survey, a project by Bert Vaux and Scott Golder.

Modern linguists concern themselves with many different facets of language, from the physical properties of the sound waves in utterances to the intentions of speakers and the social contexts in which conversations are embedded. The branches of linguistics are concerned with how languages are structured, how languages are used, and how they change. Together, the branches and subfields advance our understanding of how language works.
More at LSA

Subfields Related to the Structure of Language

Phonetics (the production, acoustics, and hearing of speech sounds)
The smallest units of language are studied in the field of phonetics, which concerns itself with the individual sounds produced while speaking.

Phonology (the patterning of sounds)
Phonology takes a look at the small units of sound together in the context of whole utterances and searches for patterns in sound across a language or a whole group of languages.

Semantics (the study of meaning)
Semantics studies the meaning behind words and combinations of words.

Pragmatics (language use, in context)
The meanings of these combinations when they interact with contextual information, and how they are produced and perceived.

10. Save the world (and make new friends) when extraterrestrials arrive by figuring out their language
More | Alien Speak | Review

9. Advance the use of a community's native language — the language in which children learn best — for education.
The MIT Haiti Project

8. Make the connection between languages and human rights.
More at LSA

6. Help the legal profession understand meaning and ambiguity in the laws they write and interpret.
More at Brooklaw

2. Discover the properties that are common to the structure of all human languages, shedding light on the human mind iteslf, including how language is processed by the brain.
Ask an MIT Linguist  |  Searching for the building blocks of language

Each human language embodies some unique information about our species and our relation to the world.

"Exploring the full range of human languages is to the linguist what examining the abundance of species on the planet is to the biologist. There may well be crucial questions about the structure of human language that can only be answered by working with, say, speakers of Navajo."
— David Pesetsky, Ferrari P. Ward Professor of Modern Languages and Linguistics

On Endangered Languages and the Safeguarding of Diversity | by Ken Hale

Studying Linguistics
When you study linguistics at any level, you gain insight into one of the most fundamental parts of being human — the ability to communicate through language. Studying linguistics enables you to understand how language works, and how it is used, developed, and preserved over time.
More at LSA  |  Why Major in Linguistics?


Linguistics as a Profession
A degree in linguistics can prepare you for a career in many different fields, among them: policy, technology, artificial intelligence (AI), medicine, international affairs, teaching, publishing, and forensics.
More at LSA

What is the best-known Sci-Fi film that features a linguist?
Hint: MIT alumna Jessica Coon of McGill was the linguistics adviser for the film, in which: "Linguistics professor Louise Banks leads an elite team of investigators when gigantic spaceships touch down in 12 locations around the world. As nations teeter on the verge of global war, Banks and her crew race against time to find a way to communicate with the extraterrestrial visitors."
Answer  |  Decoding the linguistic geekiness of the movie  |  Alien Speak

How many languages are there in the world?
Best current estimation: approximately 6,909 distinct languages. Of those, only about 200 belong to the Indo-European language family.
More at LSA

Language Log
Started in 2003 by Mark Liberman and Geoffrey Pullum

Scientific reunion commemorates 50 years of Linguistics at MIT
"Collectively, this was the group that built the field."
Story  |  MIT Linguistics Website  |  Research  |  Faculty

Commentary from the MIT Linguistic Faculty on Computing and AI

Three Questions: David Pesetsky on the field of linguistics

Donca Steriade: Searching for the building blocks of language

The Linguistics Society of America
This is a destination website! Awesome trove of insight and information.