January 2015 Edition
Published by the Office of the Dean
MIT School of Humanities, Arts, and Social Sciences

"Equal justice under the law, especially as it pertains
to criminal justice, is the civil rights issue of our time.
Black lives matter, whether they’ve committed a crime
or not. And the establishment of innocence or guilt must
be determined through fair policing and due process."

Dean Fitzgerald announces new Cynthia L. Reed Chair in French Studies & Languages
The new chair was made possible by a gift from Cynthia L. Reed and her husband, John S. Reed ’61, former chairman of the MIT Corporation, in continuation of their long-standing support of French at the Institute. Fitzgerald also announced that the inaugural holder of the Reed Chair is Bruno Perreau, Associate Professor of French Studies, whose work focuses on identity, gender, and citizenship.
Story

SHASS selects 35 Burchard Scholars for 2015
The award honors sophomores and juniors who demonstrate academic excellence in the humanities, arts, and social sciences, as well as in science and engineering. Selection is extremely competitive, and the students chosen are unafraid to wrestle with new ideas.
Story

Posen's Restraint cited as most important book of 2014 | Times Higher Education
Citation: "Barry R. Posen’s recent book, Restraint: A New Foundation for US Grand Strategy (Cornell University Press) improved my mind and might improve the world, via Posen’s original plan for reframing international security. The most important book this year, it has particular significance for countries that over-rely on Uncle Sam."
Times Higher Education | Posen webpage

Agarwal named by Forbes to "30 Under 30" leaders in Healthcare
Nikhil Agarwal, an Assistant Professor of Economics, is featured for his research work matching candidates to the best medical residencies.
Story | Agarwal webpage

"Equal justice under the law, especially as it pertains to criminal justice, is the civil rights issue of our time. For too long, black civil rights advocacy has avoided taking up issues of criminal justice for fear that doing so would diminish the political and moral force of demands for full inclusion. Today’s declaration that black lives matter is a long overdue rebuke of black respectability politics. Black lives matter, whether they’ve committed a crime or not. And the establishment of innocence or guilt must be determined through fair policing and due process." 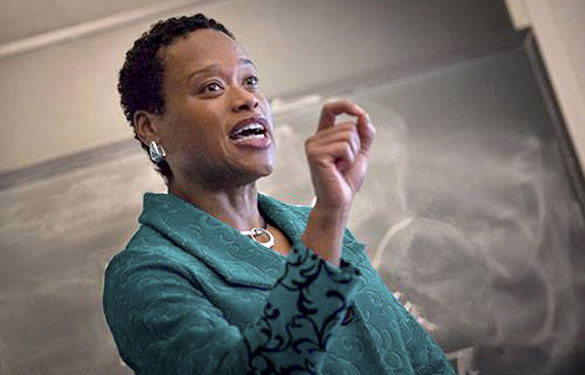 
UNDERGRADUATES
Undergraduate science writing students produce news website
A major component of CMS.350 / 21W.737, an MIT undergraduate science writing class, is a website project, which serves as a tool for students to learn how to engage readers, and as a repository for class information. Of the project, Professor Seth Mnookin says, "Students are excited about this, and I'd like to let the MIT community know how easy it is to create this sort of site for class work."
CMS.350 Website

Images from Scope, publication of the MIT SHASS Graduate Program in Science Writing

ECONOMICS
How to conduct cause-and-effect studies on complex social questions | Joshua Angrist
In a new book, Mastering 'Metrics, Angrist, Ford Professor of Economics, and Jorn-Steffen Pischke detail five methods of identifying causality in society (they call these methods the “furious five” — part of a Kung Fu motif in the text). The furious five of econometrics, they says, are randomized trials; regression analysis; use of the “instrumental variables”; regression discontinuity designs; and the “differences in differences” approach.
Story by Peter Dizikes at MIT News | Angrist webpage

SCIENCE, TECHNOLOGY, AND SOCIETY
How can Russia's great science ideas thrive in the marketplace? | Loren Graham
"The ongoing inability to turn ideas into commerce has proved to be a profound problem for Russia—and ultimately for the rest of the world as well."
Story | Graham webpage

POLITICAL SCIENCE
What kinds of cities have the most diverse police forces? | Christopher Warshaw
This article on the challenges of understanding the relationship between the diversity of the police in major cities to the residents cites and builds upon research done by Christopher Warshaw, MIT Assistant Professor of Political Science.
Story at the Washington Post | Warshaw webpage


Bringing Science and Humanities Together | Dean Deborah Fitzgerald
"What does it mean to "converge" science and humanities? Why do we want to do this? And what would it take to succeed?"
Dean Fitzgerald's presentation to the Korean National Academy of Sciences

NEWS | IN THE MEDIA

MUSIC + NUCLEAR ENGINEERING
MIT students create haunting music using particle energy
When you hear the words “music” and “particle energy,” you might not think the two have any kind of connection. Thanks to three MIT students, we have an intriguing new technique that involves making musical compositions from that very energy.
Story at the Daily Dot

LINGUISTICS
Michel DeGraff named to Haitian Kreyòl Academy
The organization was officially inaugurated in Port-au-Prince in early December 2014. An MIT Professor of Linguistics, DeGraff has been a champion of Haitian Kreyòl, as one indispensable tool for Haiti’s development.
Story | DeGraff webpage

HISTORY
A death and U.S.-Philippines Relations | Christopher Capozolla
Reports that Philippine prosecutors will charge a US Marine Private for murder come at a critical moment.
Story at The Diplomat | Capozolla webpage


MUSIC
The New Yorker on Keeril Makan
"Makan brings the spirit of his diverse musical inheritance into the still center of his compositions, building structures with deep patience and infinite calm. “I hope the emotional narratives of my music will resonate with the audience,” Makan has said. “In this resonance, I think the barriers that separate us are lowered, and our suffering is lessened.”
The New Yorker | Makan website

POLITICAL SCIENCE
A gaping hole in the social safety net | Andrea Campbell
MIT political scientist Andrea Campbell is known for her research on Social Security, Medicare, and other safety-net policies. When her sister-in-law suffered a spinal cord injury, Campbell discovered first-hand how the limitations placed on recipients of means-tested health care thwart their financial well-being.
Story at the Washington Post "Wonkblog"  | Research story at MIT News

MUSIC
Handel's Detective | Ellen Harris
"I was doing research on Handel’s will, and I realized that we don’t know who these people were to whom he had left monetary gifts. And I really thought that after 300 years we should find out who these people were. That turned into something enormously exciting. I began to feel like a detective."
Story at The Boston Globe | Interview at BBC

HISTORY
What Ivy League ties to slavery teach about absolution
"According to MIT historian Craig Steven Wilder’s recent book Ebony and Ivy: Race, Slavery, and the Troubled History of America’s Universities, many colleges and universities have historical entanglements that are likely to threaten the self-image of its students, alumni, faculty, and staff."
Story | Wilder webpage

ECONOMICS
How to arrive at the best health care policies | Amy Finkelstein
Collecting data that can trump a powerful anecdote is the value of the randomized controlled trial, says Amy Finkelstein, an MIT professor and a leader of the Oregon study. Finkelstein is helping researchers find rigorous ways to evaluate new approaches to the health delivery system.
Story at the New York Times | Finkelstein webpage

ECONOMICS
The devalued American worker | David Autor
In 1979, middle-skill jobs accounted for 57 percent of the jobs in the U.S. economy, according to calculations by David Autor, an economist at the Massachusetts Institute of Technology. By 2009, the share was down to 46 percent.
Story at the Washington Post | Autor webpage