May 2018
Published by the Office of the Dean
MIT School of Humanities, Arts, and Social Sciences

““The cool thing about CS+HASS is that a lot of computer science is not yet applied to social science and humanities fields. So it’s a great opportunity to find new things. You’re pioneering a new type of analysis.”

DEVELOPMENT ECONOMICS
For food aid recipients, information is power
A recent study finds that recipients of government aid collect 26 percent more of the goods intended for them when they are sent a simple information card with program details.
Story by Peter Dizikes

POLITICAL SCIENCE
People power in U.S. politics | Devin Caughey
A new study co-authored by Caughey shows that policies in the U.S. from 1936-2014 have been responsive to public opinion — and have become even more aligned with it in recent decades, albeit with geographical variation.
Story by Peter Dizikes at MIT News

ECONOMICS
How much does infrastructure boost an economy? | David Donaldson
Donaldson's acclaimed, innovative study, "Railroads of the Raj," which details how railroads helped India trade and grow, may also speak to the importance of infrastructure more broadly. In the U.S., debate rolls on about the value of building and refurbishing America’s roads, bridges, railroads, ports, and airports.
Story at MIT News | Donaldson receives 2017 Clark Medal

RESEARCH FEATURE: MIT AND THE LEGACY OF SLAVERY

The Task of History | The power of historical knowledge
At an MIT community dialogue event, four MIT historians discuss why understanding history is invaluable for those who want to help make a better world.
Story by SHASS Communications


3Q: Melissa Nobles and Craig Wilder on the MIT and the Legacy of Slavery dialogues
An MIT Community Dialogue series is underway as multi-year research continues.
Interview by SHASS Communications 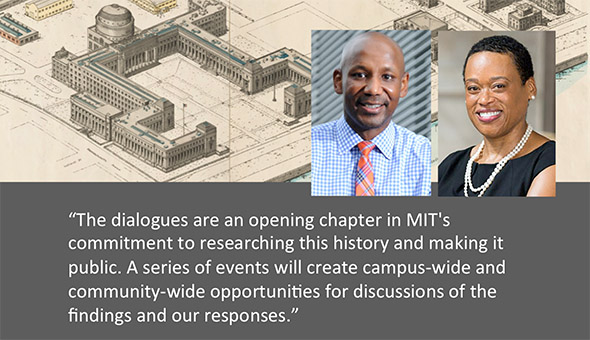 LINGUISTICS
A Remembrance of Morris Halle (1923-2018) | Memorial on May 5, 2018
"Though the loss of our friend, colleague, and guiding spirit, is unutterably sad, the memorial was — quite appropriately — a celebration.  The event was presided over by Jay Keyser, and the last speaker was Noam Chomsky, with whom Morris founded our linguistics program, and (many would say) our field in its modern form." — David Pesetsky
Webcast of the memorial


SCIENCE, TECHNOLOGY, AND SOCIETY + AERO-ASTRO
Professor Emeritus Leon Trilling dies at 93
Aeronautical engineer and historian of technology was an esteemed humanistic thinker and advocate for equality.
Story at MIT News


UNDARK MAGAZINE | KNIGHT SCIENCE JOURNALISM AT MIT
Should scientists advocate on the issue of climate change?
Views differ on what, exactly, is the best way for scientists to advocate for societal action against climate change. What are the risks, and what are the moral obligations?
Story at Undark Magazine

To see all recent awards, visit In the Media / Awards.

Parag Pathak wins Clark Medal for best economist under 40
Story at MIT News | Story at Bloomberg: "A top prize for a theory that works"

To see all featured media stories, visit In the Media.

SCIENCE, TECHNOLOGY, AND SOCIETY + PHYSICS
Free will and the most profound quantum mystery | David Kaiser
Do human beings have free will? Kaiser explains what a research collaboration by more than a hundred quantum physicists discovered.
Commentary at The New York Times

ECONOMICS
Economists warn Trump about tariffs with 1930s letter | Daron Acemoglu
Acemoglu signed the new letter because he believes the policies coming out of the White House “are bound to hurt most Americans.”
Commentary at Quartz

PHILOSOPHY
Philosophers should be keener to talk about the meaning of life | Kieran Setiya
"The idea that life has meaning is the idea that there is a truth of this extraordinary kind. Whether or not there is, the suggestion is not nonsense."
Commentary at Aeon Ideas

Detail from Portrait of Dr Gachet (1890), by Vincent van Gogh. Photo via Wikipedia