April 2011 Edition
Published by the Office of the Dean
MIT School of Humanities, Arts, and Social Sciences


Jay Scheib, Associate Professor of Theater, wins 2011 Guggenheim Fellowship
The prestigious Guggenheim Fellowship is an award for advanced, mid-career professionals, who are chosen from among thousands of distinguished artists, scholars, and scientists, for having "demonstrated exceptional capacity for productive scholarship or exceptional creative ability in the arts."
More

Pauline Maier's Ratification is finalist for the George Washington Book Prize;
Maier also receives the Miller Award
The Washington Book Award, one of the largest book awards in the U.S., is given annually to the best book on America's founding era, especially those that have the potential to advance broad public understanding of American history. The Miller Award for Excellence in American History is given by the Concord Free Library of Concord, Massachusetts.
More on Ratification by Pauline Maier

Rt Hon David Miliband MP in residence at the Center for International Studies
Miliband, an alumnus of the Department of Political Science, member of the British Parliament, and former Foreign Secretary for the United Kingdom (2007-10) is joining CIS as a Wilhelm Fellow from April 11 through 15, 2011. During this time, he will give a talk on Afghanistan, and meet with faculty and students. Miliband spoke with MIT News about the need for a revamped political strategy for Afghanistan.
Q&A with Miliban at MIT News

Japan's nuclear crisis and governmental response
Forum on March 16, 2011, co-sponsored by the Center for International Studies and the MIT Department of Nuclear Science and Engineering. MIT experts discuss Japan's nuclear past, present, and future from a political and engineering perspective. The presentation includes an eyewitness account of the crisis and the Japanese government's response.
More + Video

Why Japan relies on nuclear power | CNN interview with Richard Samuels
Japan has more than 50 nuclear power plants and had planned to build two dozen more by 2030, according to Samuels, Ford International Professor of Political Science, and director of MIT's Center for International Studies, who has written on Japanese energy and security policy.
More

Digital forensics
Photo experts converge at MIT to discuss how to spot doctored images. The ability to fake digital images is now running far ahead of our ability to detect the fakes. Report from an event sponsored by the Knight Science Journalism program and Harvard’s Nieman Foundation.
More


3 Questions: Liquidity lessons
Economist Bengt Holmstrom on the problems of borrowing and lending in a post-crash world, and the role of government in responding to crises.
Peter Dizikes at MIT News

Thinking like economists
From funky markets in airfares and hot dogs to the effects of alcohol taxes on drunk-driving fatalities, MIT undergraduates try their hand at economics research.
Peter Dizikes at MIT News


Suzanne Berger leads a team to re-think what it means to be "made in America."
MIT President Susan Hockfield has enlisted Political Science professor Suzanne Berger to undertake a game-changing study of America’s industrial economy. Berger and Phil Sharp, Nobel Laureate in biology, are chairing a new interdisciplinary team called Production in the Innovation Economy (PIE).
More at Political Science


Poor Economics | Abhijit Banerjee and Esther Duflo
Abhijit Banerjee, Ford Foundation International Professor of Economics, and Esther Duflo, Abdul Latif Jameel Professor of Poverty Alleviation and Development Economics, have published A Radical Rethinking of the Way to Fight Global Poverty (Public Affairs, 2011). This important book offers us an opportunity to think of a world beyond poverty.
More at Bookshelf


How the Hippies Saved Physics | David Kaiser
David Kaiser, Professor of Science, Technology, and Society, has published How the Hippies Saved Physics: Science, Counterculture, and the Quantum Revival (W.W. Norton, 2011). The story of young scientists who altered the course of modern physics, forcing mainstream physicists to pay attention to the strange but exciting underpinnings of quantum theory.
More at Bookshelf


Modes of Creativity | Irving Singer
Irving Singer, Professor of Philosophy, has published Modes of Creativity (MIT Press, 2011). In this philosophical exploration, Singer describes types of creativity and their manifestations across the arts and sciences, and amplifies discoveries in cognitive science and neurobiology by aligning them with the human quest for meaning.
More at Bookshelf

Saturday, April 30
Under the Dome | MIT Open House | Great Ideas Event
For MIT’s Open House on April 30th the School is producing an all-day event on the innovations and contributions in the humanities, arts, and social science disciplines. The event at Kresge Auditorium will feature idea stations and current research, as well as music and theater performances, and literary readings.
Open House information

April 13–15 | FAST: Festival of Arts + Technology + Science
La Ronde
A comedy of lust and longing. Written by Arthur Schnitzer at the beginning of the 20th century, the play has been adapted by Anna Kohler for MIT. With the help of today’s media, actors from other continents will be able to perform in the show, along with the MIT Dramashop actors.
Full information

April 21—April 23 | FAST: Festival of Arts + Technology + Science
Dance Technology and Circulations of the Social, V. 2.0
A dozen dance technology researchers will be on campus to present their current, media-focused research. The two-day symposium includes readings, demonstrations, and small-scale performances, and will produce an anthology of writings to be edited by the symposium conveners.
Full information

Lightman on art and science
To celebrate the birthday of Albert Einstein—a video interview with adjunct professor Alan Lightman, best-selling author of Einstein's Dreams, and the first professor at MIT to receive a joint appointment in the sciences and the humanities.
Watch video at Tech TV


Inside Tahrir Square | CIS Starr Forum
Greek journalist Iason Athanasiadis presents an intimate photographic portrait of the Egyptian revolt from its epicenter in Tahrir Square, following the attacks by government loyalists on protesters on January 25th. David Weinberg provides perspectives on US policy in the Middle East.
Watch 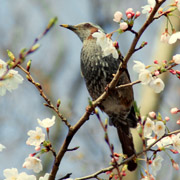