Published monthly by the Office of the Dean
MIT School of Humanities, Arts, and Social Sciences

Peter Diamond wins the Nobel Prize for Economic Sciences
Peter A. Diamond PhD '63, Institute Professor and professor of economics at MIT's School of Humanities, Arts, and Social Sciences, has won the Sveriges Riksbank Prize in Economic Sciences in Memory of Alfred Nobel for 2010. Diamond has received the award along with two co-winners, Dale T. Mortensen of Northwestern University and Christopher A. Pissarides of the London School of Economics. The Nobel Foundation cited the three scholars, in part, "for their analysis of markets with search frictions."

“Of course Peter is an incredibly distinguished economist,” said Deborah Fitzgerald, Kenan Sahin Dean of MIT’s School of Humanities, Arts, and Social Sciences. “He is also a very dedicated member of the MIT community who has often worked behind the scenes to make the Institute a better place.”

Ricardo Caballero, Ford International Professor of Economics, and Head of the Department of Economics, said, "Peter was awarded the Nobel for his seminal work on search theory — a theory of the frictions and incentives involved in the process of matching — but he could have won it for his work on public debt and the overlapping generations model, or on optimal taxation with private information, and so on. He [also] has enormous wisdom...This is a good day for economics."
Full Story

Mary Fuller receives the Levitan Prize in the Humanities

The James A. and Ruth Levitan Prize in the Humanities has been awarded to Mary Fuller, Professor of Literature. The $25,000 Levitan Prize, a gift from the late James A. Levitan, a 1945 MIT graduate in chemistry, is awarded annually as a research fund to support innovative and creative scholarship in the humanities.
More

Alumni Baird and Saez win 2010 MacArthur "genius" grants
Two alumni of the MIT School of Humanities, Arts, and Social Sciences — linguist Jessie Little Doe Baird SM ’00, who is working to revitalize a long-silent Algonquin language, and economist Emmanuel Saez PhD ’99, who studies the relationship between income and tax policy — have been named 2010 MacArthur Fellows. The fellowships, awarded each year, carry a $500,000 purse that recipients may use as they see fit.
More

Thomas Levenson appointed head of Writing and Humanistic Studies
Tom’s extensive experience in documentary film-making and writing about science in both historical and contemporary contexts makes him a natural leader for this terrific program.," said Dean Deborah Fitzgerlad. "His boundless energy, imagination, and productivity inspire us all, and remind us of the deep connections between the many different forms of “story-telling.”
Profile

James Paradis named interim director of Comparative Media Studies
“Jim is a first-rate scholar, a crack administrator, and a splendid identifier of emerging trends and new directions in humanities scholarship and activity. For many years he has been cultivating new faculty who are on the cutting edge of their fields in writing and media. He will be an excellent Interim Head and wise counsel to students and colleagues alike.” — Dean Deborah Fitzgerald
Profile 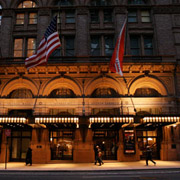 Bookshelf | Recent Faculty Books and Productions
The research of this School appears principally in the form of books, as well as music and theater productions. These gems of the School provide new knowledge and analysis, innovation and insight, guidance for policy, and nourishment for lives.
Take a look

Are we hard wired for a basic moral sense?
If a runaway trolley is destined to hit a group of five people but can be diverted onto a track where it will hit only one, is it right to divert it?  What if it can only be stopped by throwing somebody in front of it?  Developed by Philosophy Professor Judy Thomson, now emeritus, the famous "trolley problem" has been debated for more than 30 years, as philosophers the world over struggle to understand what principle underlies the different responses elicited by the two scenarios. In each case, one person is sacrificed to save five. Yet people overwhelmingly support diverting the train and object to throwing a person into its path. Why?
Learn more

Evan Ziporyn embarks on season of major musical events
For Ziporyn, Kenan Sahin Distinguished Professor of Music, the current season has emerged as an especially rich confluence of major musical events involving his works. Highlights include Boston and New York premieres of Ziporyn’s opera, “A House in Bali;” an evening at Carnegie Hall devoted to performances of Ziporyn's compositions; the US premiere of a work by Steve Reich; major international festivals, and the world premiere of Ziporyn's "Tabla Concerto."
More

Boston Symphony Orchestra begins two season cycle of symphonies of John Harbison
John Harbison is Professor of Music in MIT's School of Humanities, Arts, and Social Sciences, and an MIT Institute Professor. Beginning with a concert on Thursday, October 14, 2010, the Boston Symphony will perform a complete cycle of Harbison's symphonies, spanning two seasons. The BSO calls the performance cycle "an unprecedented opportunity to experience these exciting...contributions to the modern symphonic literature."
More + Interview


Nominations open for 2011 Burchard Scholars
The Burchard Scholars Program brings together distinguished members of the faculty and promising MIT sophomores and juniors who have demonstrated excellence in some aspect of the humanities, arts, or social sciences. The format is a series of dinner seminars with discussions on current research topics. A Burchard Scholar can be a major in any department of the Institute; no preference is given to HASS majors. All sophomores and juniors in good standing are eligible to apply.
How to Nominate and Apply

Miyagawa on OpenCourseWare: A Decade of Global Benefit
In a commentary for the September/October 2010 MIT Faculty Newsletter, Shigeru Miyagawa, chair of the MIT OpenCourseWare Faculty Advisory Committee, and head of Foreign Languages and Literatures in the School of Humanities, Arts, and Social Sciences, discusses OCW’s many successes as the program prepares to celebrate its 10th anniversary.
Full commentary by Shigeru Miyagawa

Evan Ziporyn: Carnegie Hall interview | Balinese Music as Inspiration
In the first installment of a video interview for Carnegie Hall's Sound Insights series, Evan Ziporyn, Kenan Sahin Distinguished Professor of Music, speaks about how he immersed himself in Balinese music and culture in his early 20s, and how it influenced his compositions for Gamelan, and his future musical direction.
Watch Video Find us on Facebook
Great Fans Change the World