A section of Said and Done
Full December 2016 edition

ECONOMICS
Advice for the next president | David Autor
In short: Create protections and stronger financial assistance programs for workers who may lose their jobs as a result of trade deals.
Story at the Boston Globe

HISTORY AND THEATER
Mike Pence, "Hamilton," and the theater's long history of dissent | Jeffrey Ravel
Ravel, Head of MIT History, pens an Op-Ed: "Setting aside the president-elect’s curious appropriation of the contemporary concept of a 'safe space,' those who have studied the stage know that playhouses have never been exempt from the political currents that swirl outside their walls. In Alexander Hamilton’s time at the end of the 18th century, commercial playhouses in London and Paris, the two great Western capitals of the day, were raucous, chaotic spaces.
Cognoscenti at WBUR


MIT
Colleges presidents urge Trump, others to protect undocumented students
In a letter released Monday, more than 100 college and university presidents, including MIT President Rafael Reif, urged Trump and others to preserve and expand a four-year-old program, called Deferred Action for Childhood Arrivals, that protects undocumented immigrants. The presidents of Harvard, Boston University, Northeastern, Smith, Mount Holyoke, and Amherst college were also among the signatories.
Story at the Boston Globe

ECONOMICS
What role for the workers in Trump's American factory revival? | David Autor
Manufacturing remains economically important, says MIT economist David Autor. It accounts for about 70 per cent of all private sector research and development, but.... it'snot going to employ those less-educated, dexterous workers who have been eliminated from the labour force over the past 15 years,” Autor says. “That's largely over."
Financial Times (Subsc Req)

COMPARATIVE MEDIA STUDIES
Open for Debate discussion on C-SPAN's Book TV | Heather Hendershot
Hendershot, a film and media professor, talked about her book Open to Debate: How William F. Buckley Put Liberal America on the Firing Line, in which she looks at William F. Buckley’s television program, “Firing Line,” which debuted in 1966 and featured the National Review founder in conversation with intellectual adversaries to debate the social and political issues of the day. In her book, Hendershot argues that Mr. Buckley’s foray from print into television allowed him to further arguments outside of conservative circles and cast him as an early pundit.
C-SPAN2’s Book TV 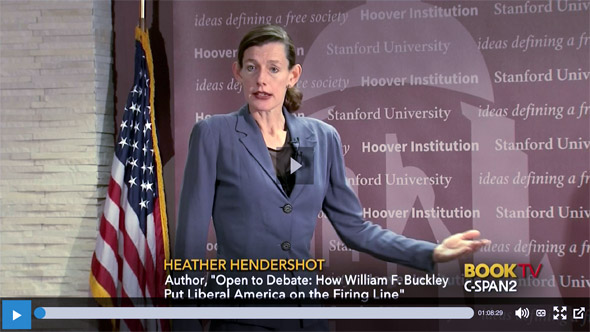 ECONOMICS
Trump's Challenge to Traditional Economics
MIT economists Daren Acemoglu and James Robinson, Bloomberg reports, argue that seemingly logical economic decisions have a political dimension that can undermine their benefits — a dimension that some economists ignore.
Story at Bloomberg

COMPARATIVE MEDIA STUDIES
Want an Election Escape? The Internet Doesn’t Work Like That | Edward Schiappa
Edward Schiappa, John Burchard Professor of the Humanities, reflects on political engagement in online communities. “This really is an extraordinary time, and Trump really should not be normalized by people just shrugging and going back to business as usual,” he says. “It is good that people are paying attention.”
Story at Wired


POLITICAL SCIENCE AND ECONOMICS
Hillary Clinton’s Juggling Act | Charles Stewart III and Daron Acemoglu
MIT SHASS political scientist Charles Stewart III says that the two major political parties in the U.S. offer “two distinct views about what constitutes a good society, one cosmopolitan and the other parochial.” MIT economist Daron Acemoglu says that Democrats “should seek a coalition that stands for the most vulnerable people in society,” and that such a coalition needs "the support of influential, well-off members of American society.”
Story at the New York Times

ECONOMICS
Tom Price for HHS shows Trump wants to dismantle Obamacare | Jonathan Gruber
Detailing the possible changes coming to the Affordable Care Act (ACA), MIT economist Jonathan Gruber, one of the ACA’s key architects, remarks, “If you replace a 60-year-old with a 20-year-old, that doesn’t change the number of people covered, but it changes the value of the coverage and of the program.”
Story at Vox

LITERATURE
Political correctness: How the right invented a phantom enemy
Ruth Perry, the Ann Fetter Friedlaender Professor of the Humanities at MIT, tells The Guardian that historically, the term “politically correct” was “always used ironically, always calling attention to possible dogmatism.”
Story at The Guardian

GLOBAL STUDIES AND LANGUAGES
OCW video resource for International Teaching Assistants
The User-friendly Classroom video training series was created specifically for teaching assistants for whom English is a second language and the USA a second culture by A.C. Kemp, a lecturer in MIT Global Studies and Languages (GSL). The videos focus on developing strategies for successful, student-centered communication in the interactive American classroom. These videos demonstrate best practices through examples of successful teaching scenarios, interviews with undergraduates, and advice from international teaching assistants.
Story and Information at OCW

ECONOMICS
Why Keeping Only the Popular Parts of Obamacare Won’t Work
The New York Times cites research by MIT economist Jonathan Gruber, indicating that a healthcare plan without an individual mandate “would cover only a third of the uninsured and cost two-thirds as much as an identical plan with a mandate.”
Story at the New York Times

HEALTH CARE ECONOMICS
Gruber: Trump Can’t Make Obamacare Better But Can Make It Worse
Radio host Alan Combes talks to MIT economist Jonathan Gruber about the Affordable Care Act. Gruber asserts that while it would be difficult for the President elect to improve care and lower costs, it would be easy to make things worse.
Story at Fox News

POLITICAL SCIENCE
Your vote counts! But how does your vote get counted?
Wired talks to MIT-SHASS political scientist Charles Stewart III about the U.S. electoral system: how votes get counted, how predictions get made, and why every vote doesn’t get counted on election day.
Story at Wired

ECONOMICS
America's 'Forgotten' Hear Trump's Economic Battle Cry, But Will He Deliver?
At NPR, MIT economist David Autor expresses reservations about the ability of traditionally Republican policies to improve the economic well being of middle-income voters. "I think the Republican Party has done extremely little for them."
Story at NPR

COMPARATIVE MEDIA STUDIES
Open to Debate: When disagreement did not imply disdain
The Los Angeles Times reviews Heather Hendershot's new book on William Buckley: "Buckley’s televised debates were penetrating but civil, focused on policy not personality.... Buckley, and apparently his guests too, relished the opportunity for serious thoughtful exploration of differences."
Review at the LA Times

ECONOMICS
Americans are spending more on health care — for their pets | Amy Finkelstein
A recent study co-authored by MIT economist Amy Finkelstein found that pet owners are spending more on veterinary healthcare each year. “It should give us pause before attributing the large and rising health care costs in the U.S. solely to the prevalence of insurance and government involvement,” the researchers write.
Story at the Washington Post

POLITICAL SCIENCE
How Shiite Muslims view the world | Fotini Christia
MIT political scientist Fotini Christia outlines the findings from her research into the views of Shiite Muslims, which her team gathered at the world’s largest — yet largely unknown — annual Muslim pilgrimage, in Karbala, Iraq.
Story at The Washington Post

Touching a shrine in Karbala, a city visited annually by Shiite worshipers on pilgrimage

DEVELOPMENT ECONOMICS
Trump is a completely different playbook | Abhijit Banerjee
MIT Economics Professor Abhijit Banerjee talks to CNBC about an open letter co-signed by nearly 400 economists who believe that Donald Trump is not the right person to lead the United States.
Video at CNBC

LINGUISTICS
Noam Chomsky and the Bicycle Theory
The New York Times interviews Noam Chomsky, Professor Emeritus of Linguistics, about the sixtieth anniversary of his landmark volume, Syntactic Structures, his political views, and his coffee mug.
Story at the New York Times

POLITICAL SCIENCE
Elections Have Always Been Rigged, But Not Like Trump Says | Charles Stewart III
In this article on the American electoral system, MIT political scientist Charles Stewart III remarks that voting itself has a certain economic cost to voters: “Whatever the cost [of long wait times at the polls] is, it lands disproportionately more on some people than others, and that’s unfair.”
Story at Wired

POVERTY ACTION LAB
Can Microloans Lift Women Out Of Poverty? | Abhijit Banerjee
Microloans have attracted interest as a possible tool to reduce poverty for some time. J-PAL co-director Abhijit Banerjee, however, notes that other interventions, such as cash grants or free assets, might actually work better.
Story at WGBH

SCIENCE, TECHNOLOGY, AND SOCIETY
A Toddler Dies as Her Mother Checks Her Phone, and China Wrings Its Hands | Sherry Turkle
MIT anthropologist Sherry Turkle, responding to the tragedy in China, says that smartphones' popularity has created the need for “sacred spaces” without phones. “Never bring a phone to a meal,” she suggests. “No phones in the car. No phones at meetings or in classrooms. We can find our way back to each other.”
Story at the New York Times