URBAN TRANSPORATION
A simple solution for terrible traffic | Olken, Kriendler
“HOV policies on central roads were making traffic everywhere better, both during the middle of the day and on these other roads during rush hour,” MIT economist Ben Olken observes.
Story at MIT News


DEVELOPMENT ECONOMICS
J-PAL North America partners with local governments to tackle homelessness and reduce incarceration
Selected cities and counties will receive funding and technical support from J-PAL to test innovative strategies in the fight against poverty.
Story at MIT News

DEVELOPMENT ECONOMICS
Study: Preschoolers learn from math games — to a point | Esther Duflo
Games found to improve conceptual math skills, but gains may not carry over to primary school.
Story at MIT News by Peter Dizikes

INEQUALITY | ECONOMICS
America's two track economy | Peter Temin
Peter Temin, an economics professor at MIT, tackles the causes of poverty in the United States. In The Vanishing Middle Class: Prejudice and Power in a Dual Economy. Temin examines racism and substandard education, as well as the lack of a proactive infrastructure program. And he proposes solutions: expanding access to public education, investing in infrastructure, and forcefully confronting institutional mechanisms that perpetuate racial inequality.
Story at MIT News by Peter Dizikes | Story at The Atlantic |  Story at Salon | Commentary at Times Higher Education 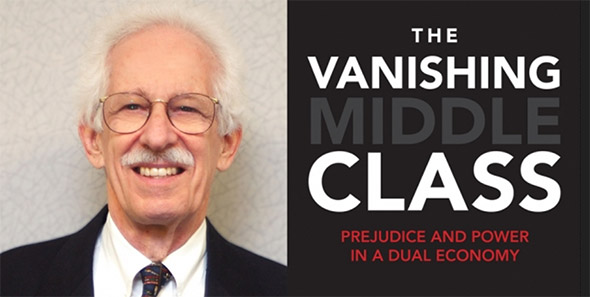 "The link between the two parts of the modern dual economy is education, which provides a possible path that children of low-wage workers can take to move into the FTE (finance, technology, electronics) sector."

SECURITY STUDIES | CYBERSECURITY
Patching the electric grid | Joel  Brenner
"For the sake of efficiencies … we have created tremendous risk for ourselves," warns Joel Brenner, the principal author of the MIT report on cybersecurity. Now, he says, people are waking up to the danger.
Story at Technology Review

ABDUL LATIF JAMEEL POVERTY ACTION LAB + MEDIA LAB
Why do some neighborhoods improve?
The density of highly-educated residents, rather than income or ethnic composition, predicts revitalization.
Story at MIT News

It is a huge question in development economics: If a program yields good results in one country, will it work in another? And why or why not? In a new article, two J-PAL directors unveil the lab’s approach.

CENTER FOR INTERNATIONAL STUDIES
Interview with Eric Heginbotham
Eric Heginbotham PhD '04, a leading political-military analyst of East Asia, is a principal research scientist at CIS. Before joining the Center, he was a senior political scientist at the RAND Corporation. In this interview, he discusses US-China relations, US allies in East Asia, North Korea, and what brought him back to MIT.
Interview at précis

CENTER FOR INTERNATIONAL STUDIES | STARR FORUM SERIES | IMMIGRATION
Fight over foreigners: visas and immigration in the Trump era
Justin Steil, assistant professor of law and urban planning at MIT, moderated the CIS Starr Forum. Steil's introduction, followed by an excerpt of his questions to the panelists, is featured.
Story by CIS

IMMIGRATION
Threat perception and immigration reform in the United States | Marika Landau-Wells
Immigration reform proved to be a particularly contentious issue in the US 2016 presidential election. In some respects, the attention appears justified by the continued relevance of immigration for American politics.
Story by CIS

POLITICAL SCIENCE | STARR FORUM SERIES
The U.S. and Mexico: What’s the way forward?
MIT event offers look at how US-Mexico relations could revive. Over the past two years, U.S.-Mexico relations have taken a distinctive turn, stemming from the issue agenda President Donald Trump has brought to U.S. politics: Trump campaigned on building a border wall, and says he wants to change the North American Free Trade Agreement (NAFTA), which shapes the countries’ economic relations. The wall may not reach fruition, and it’s unclear whether NAFTA will be significantly altered, but these political stances have created a “fundamental tectonic shift in the relationship” between the U.S. and Mexico, observed Arturo Sarukhan, former Mexican ambassador to the U.S., at a public forum at MIT.
Story by Peter Dizikes at MIT News