A section of Said and Done
Summer 2015 edition

LINGUISTICS
Sabine Iatridou, Kai von Fintel, elected Fellows of the Linguistic Society of America
This is the linguistic field’s highest honor, awarded each year to a small number of linguists for distinguished contributions to the discipline. Iatridou and Von Fintel join their MIT colleagues Noam Chomsky, Morris Halle, Irene Heim, David Pesetsky, and Donca Steriade, who have been honored as Fellows in previous years, as well as more than twenty alumni of the department.
Iatridou website | Von Fintel website | MIT Members of the LSA


MIT CLASS OF 2015
MIT chapter of the Phi Beta Kappa Society inducts 80 new members
Jeffrey Ravel, professor of history and president of Xi of Massachusetts said, “This year's inductees represent the very best of MIT, in the sense that they have excelled not only at technical subjects, but also at the humanities, arts, and social and natural sciences.”
Story by SHASS Communications


PHILOSOPHY, POLITICAL SCIENCE, ECONOMICS
Haslanger, Thelen, and Werning elected to the American Academy of Arts and Sciences
“We are honored to elect a new class of extraordinary women and men to join our distinguished membership,” said Don Randel, chair of the academy’s Board of Directors. “Each new member is a leader in his or her field and has made a distinct contribution to the nation and the world.”
Story at MIT News | AAAS press release


ECONOMICS
Jim Poterba elected to the National Academy of Sciences
Bowring, Mrowka, and Seager named, along with Poterba, for “distinguished and continuing achievements in original research.” Membership in the NAS is one of the most significant honors given to academic researchers.
Story at MIT News


MIT SHASS STAFF
Six members of the SHASS community receive Infinite Mile Awards
The awards, which salute SHASS staff members for exceptional contributions that benefit the School and the Institute, were presented during a festive luncheon at the MIT Media Lab.
Announcement + Recipients


POLITICAL SCIENCE
Kathleen Thelen receives two book awards
For Varieties of Liberalization and the New Politics of Social Solidarity (Cambridge University Press, 2014), Thelen has received the ASA’s Barrington Moore Book award, and the 2015 Best Book Award (co-winner) of the APSA Section on European Politics and Society, an award given annually to the best book in the area of comparative and historical sociology.
About the book | Thelen website


POLITICAL SCIENCE
In Song Kim awarded the 2015 Mancur Olson Award
Kim, an Assistant Professor of Political Science, received this award from the APSA’s Political Economy Section, for the for the best dissertation in Political Economy in the previous two years.
About | Kim webpage 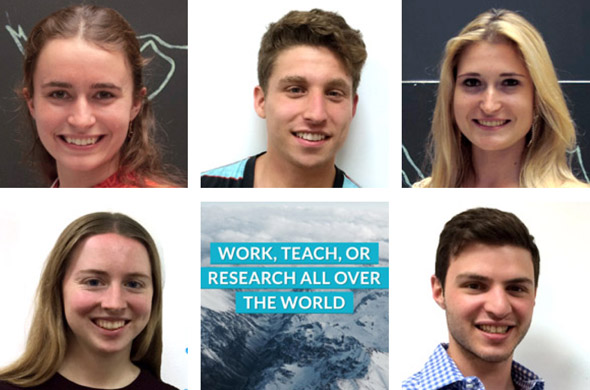 POLITICAL SCIENCE
Fotini Christia named an inaugural Andrew Carnegie Fellow
The Carnegie Corporation has announced the inaugural class of Andrew Carnegie Fellows, among them MIT’s Fotini Christia, associate professor of political science. Each fellow will receive up to $200,000. Christia’s research — which has involved extensive fieldwork in Afghanistan, Bosnia, Iran, the Palestinian Territories, Saudi Arabia, Syria and Yemen — focuses on conflict and cooperation in the Muslim world.
Story by SHASS Communications

HISTORY
Eric Goldberg awarded fellowship at the Institute for Advanced Studies at Princeton
During the fellowship, Goldberg will research social history of hunting from the fall of the Roman Empire to ca. 1000 CE. He specializes in the history of Late Antiquity and the Early Middle Ages, and his research focuses on the politics and culture of the Merovingian, Carolingian, and Anglo-Saxon worlds.
About the Fellowship | Goldberg website | Institute for Advanced Studies

ARTS AT MIT
Mellon makes $1.5 million grant MIT's Center for Art, Science and Technology
CAST HAS received a $1.5 million grant from the Andrew W. Mellon Foundation, bringing the foundation's total support for CAST to $3 million, among the largest gifts received by the arts at MIT.
Story by Arts at MIT

ANTHROPOLOGY
Anthropologist Susan Silbey receives Mentorship Award
The award from the Law and Safety Association is given to an outstanding mentor for graduate, professional or undergraduate students who are working on issues of law and society. The citation reads, in part: “Silbey's wisdom, energy, commitment, generosity, and enthusiasm have deeply affected our collective experience, transformed our academic work, and provided a model for academic life.”
Citation

SCIENCE WRITING
Seth Mnookin wins 2015 Eric Martin Award
Mnookin received the award (for an article for a Public or Health Care Consumer Audience) for his longform article One of a Kind: What Do You Do if Your Child Has a Condition That Is New to Science? in The New Yorker (July 21, 2014).
Award information

COMPARATIVE MEDIA STUDIES / WRITING
Junot Díaz receives Premio Metropolis Azul Prize
The prize is given by the Blue Metropolis International Literary Festival in Montreal to an author from any country or region, for a work of fiction written in Spanish, English, or French, which explores some aspect of Spanish-language culture or history.
About | Diaz MIT webpage