A section of Said and Done
Full March 2019 edition

COMPARATIVE MEDIA STUDIES
T.L. Taylor on gamergate, livestreaming and esports
Gamergate was "a kind of template or dress rehearsal for the alt-right movement."
Story / Interview at Public Books

LINGUISTICS
A change in our diets may have changed the way we speak
“We really need to know that the small [average] differences observed in studies like this aren't swamped by the ordinary diversity within a community,” Adam Albright, a linguist at MIT.
Stories at National Geographic and the New York Times

WRITING
The Creative Edge of ADHD | Alan Lightman
And what about those of us who like to be creative but haven't been diagnosed with an attention problem? MIT professor Alan Lightman tackles this in his new book, “In Praise of Wasting Time.” Lightman is a physicist and a professor of the humanities.
Story at Bloomberg

PHILOSOPHY
Robocar engineers prefer to solve the runaway "trolley problem" by fixing the brakes on the trolley
A lot of recent headlines have come because of an MIT project called the "moral machine" where they asked human test subjects what they would want a car to do if it had to choose between killing different sorts of people.
Story at Forbes 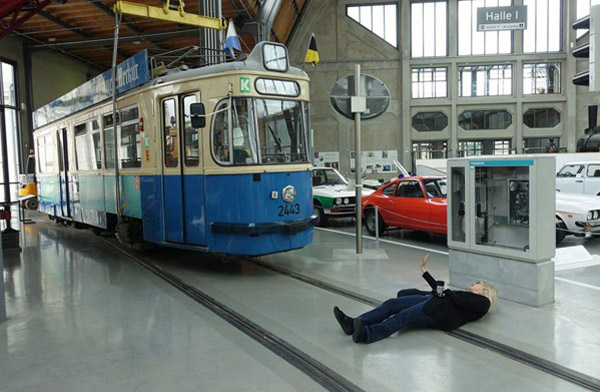 POLITICAL SCIENCE
Uncommon knowledge: incarceration and voting
Ariel White, a political scientist at MIT, analyzed data on first-time misdemeanor defendants in Harris County (Houston), Texas, and found that black defendants who got jail time because they were randomly assigned to a more punitive courtroom were significantly less likely to vote in the next presidential election.
Story at Boston Globe

J-PAL
Give a man a fish, he eats for a day. But if you lobby for better fishing policy…
In 2018, it recommended a grant to the Innovation in Government Initiative, part of the Abdul Latif Jameel Poverty Action Lab (J-PAL) at MIT, which provides technical assistance to governments trying to scale up proven antipoverty programs, as well as partnering researchers with national governments interested in answering questions around national policy.
Story at Vox

SCIENCE, TECHNOLOGY, AND SOCIETY
The early internet conspiracy game that got too real
According to MIT's David Kaiser in his 2011 book How the Hippies Saved Physics, the group's serious-yet-playful forays into offbeat ideas like telepathy and contacting the dead led to controversy and attention, and “From these battles, quantum information science was born.”
Story at Gizmodo

POLITICAL SCIENCE
Dems drop plan to give feds time off to be election poll workers
"The poll worker shortage is not a new phenomenon," a 2013 study by MIT noted in a refrain that's been repeated for many years by local officials about the shortage of poll workers.
Story at Boston 25 News


ECONOMICS
Knowing the future of work
For the next eight weeks, some of the best-known minds in the study of the future of work will be appearing at MIT. It's a free online course led by MIT's Thomas Kochan and Elisabeth Reynolds, and it will track technological history going back to the 19th century, income inequality, labor groups, automation, German manufacturing and more. Among speakers are David Mindell, an MIT historian of technology, David Autor, an MIT labor economist.
Story at Axios

POLITICAL SCIENCE
Top Trump official may have just doomed US-North Korea talks
“Insisting on disarmament as a condition for peace will lead to exactly the opposite of disarmament and peace,” tweeted MIT nuclear expert Vipin Narang.
Story at Vox

POLITICAL SCIENCE
It’s clearer than ever that the US’s North Korea policy is in total chaos
“We are nowhere,” says MIT nuclear expert Vipin Narang. “Which is probably exactly where the North Koreans want us to be.”
Story at Vox


SECURITY STUDIES PROGRAM
On North Korea | Jim Walsh
Walsh, one of the few Americans who has traveled to North Korea on nuclear talks, joined Jim Braude to discuss. Walsh is a senior research associate at MIT's Security Studies Program.
Story at WGBH


POLITICAL SCIENCE
Trump-Kim talks or not, North Korea's nuclear arsenal apparently continues to grow
The shutdown of Yongbyon, which includes North Korea's only plutonium reactor as well as a uranium plant, would at least have limited the growth of North Korea's arsenal, said Vipin Narang, a nuclear proliferation expert and political science professor the Massachusetts Institute of Technology.
Story at LA Times 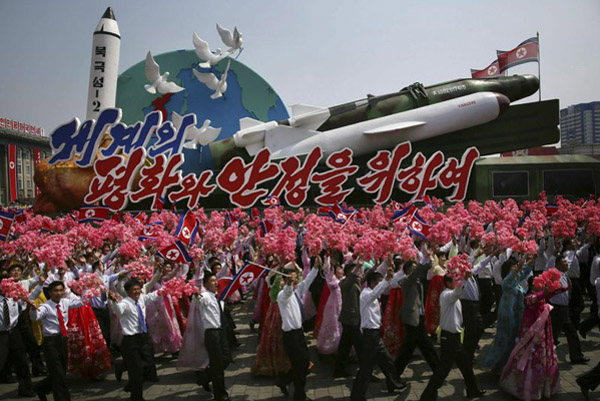 North Koreans parade in Pyongyang in 2017: photo by Wong Maye-E/AP

POLITICAL SCIENCE
Democrats lay groundwork to demand Trump's tax returns
“Unpopular take maybe: no deal is better than a bad deal or a deal that one side may violate, which sets up the prospect for conflict. Sometimes you throw the ball away and live to play another down,” Vipin Narang, an associate professor of political science at MIT tweeted. “This isn't a huge surprise."
Story at Washington Post

POLITICAL SCIENCE
Tensions rise in Kashmir
MIT Professor Vipin Narang is a guest on Newshour where he discusses the likelihood of military escalation between nuclear-armed India and Pakistan.
Analysis at BBC World Service


POLITICAL SCIENCE
The recent spike in tensions between India and Pakistan, explained
In order for either country to resort to using their nuclear arsenals, things would have to ramp way up, Vipin Narang, a nuclear expert and associate professor of political science at MIT told me — for example, an Indian ground invasion across the border. At this point, he said, “we're nowhere near that.”
Commentary at Vox 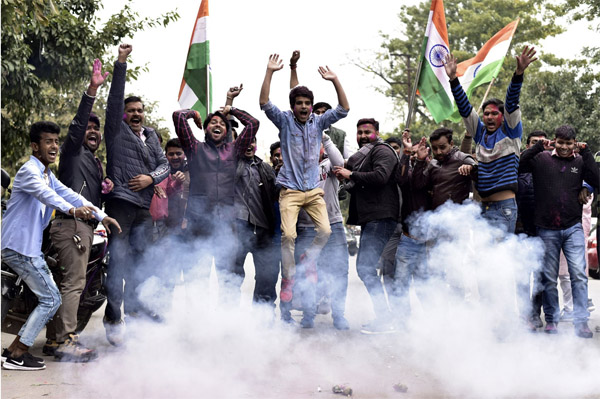 Men in Noida, India, celebrating after the airstrike on Balakot: photo by Virendra Singh Gosain/Hindustan Times via Getty Images

POLITICAL SCIENCE
Nuclear-armed India and Pakistan face off in renewed escalation
“The last time the Indian Air Force crossed the line of control intentionally and publicly to conduct air strikes was 1971,” said Vipin Narang, an associate professor of political science at MIT, referring to the Indo-Pakistan war over Bangladesh.
Story at Bloomberg

SECURITY STUDIES PROGRAM
Civilians Evacuated From Last ISIS-Held Village In Syria
Senior Research Associate, Jim Walsh speaks to Jeremy Hobson about the significance of the evacuation of civilians from the last ISIS-held village in Syria.
Commentary at WBUR

POLITICAL SCIENCE
Narendra Modi v Imran Khan: Who won the war of perception?
Whoever has won the battle of perceptions, there in one silver lining in this sorry saga. According to Vipin Narang, professor of political science at MIT, neither side seems to want a war. He believes that they "have had their Cuban Missile Crisis moment and recognise how a couple of wrong turns could set off uncontrollable escalation."
Story from the BBC

WRITING/PHYSICS
Alan Lightman will be Commencement speaker at Skidmore
Alan Lightman will speak at the May 18 commencement exercises at the Saratoga Performing Arts Center and will receive an honorary degree. Lightman is a physicist and a professor of the practice of the humanities at MIT.
Story at San Francisco Chronicle

ECONOMICS
Ngozi Okonji Iweala: More Than A Financial Influencer
After her secondary school education in Enugu and Ibadan, Iweala proceeded to Harvard University and thereafter to MIT where she graduated with a PhD in regional economics and development. She later landed a job at the World Bank where she spent 21 years as a development economist.
Profile at The Guardian

HISTORY
Kenda Mutongi named finalist for Elliott P. Skinner Award
Conferred by the Association for Africanist Anthropology, the award goes to the book that best furthers both the global community of Africanist scholars and the wider interests of the African continent.
About the award | Mutongi's webpage

LINGUISTICS
QS World University Rankings rates MIT, Lingistics No. 1 worldwide
This is the seventh straight year that QS has ranked MIT the top university in the world. QS has also ranked Linguistics as no.1, and Economics no.2 worldwide. Earlier this year, Times Higher Education (THE) ranked MIT No.2 worldwide for the "Arts and Humanities" and No.1 worldwide for Economics and Business for 2019.
QS story at MIT News  | Times Higher Education rankings

ECONOMICS
Nikhil Agarwal among four MIT professors selected as 2019 Sloan Fellows
Nikhil Agarwal, the Castle Krob Career Development Assistant Professor of Economics in the School of Humanities, Arts, and Social Sciences, studies the empirics of matching markets. The Sloan Fellows are nominated on “the basis of a candidate’s research accomplishments, creativity, and potential to become a leader in his or her field.”
Story at MIT News

KNIGHT SCIENCE JOURNALISM PROGRAM AT MIT
Gulf Stream Series Wins MIT KSJ Victor K. McElheny Award
The inaugural McElheny Award for local and regional science journalism goes to a team of reporters from the Charleston Post and Courier, for a series that sheds light on a little-known impact of climate change and an overlooked risk of offshore drilling in the eastern U.S.
Award Story | Read Part I of the Series | About the Award

"Off South Carolina, the ocean suddenly changes color, from green to deep blue. You’re in the Gulf Stream now, in warm and salty water from the tropics, with swordfish, tuna and squid, in a current so strong that it lowers our sea level. Benjamin Franklin would learn about this current’s force. He was a Colonial postmaster before the American Revolution, and he’d noticed British mail ships were slow, much slower than other merchant ships. Why?"

A section of Said and Done
Full March 2019 edition

Said and Done is published by SHASS Communications
Office of the Dean, MIT School of Humanities, Arts, and Social Sciences
Published 18 March 2019