A New Era and New Scale for MISTI 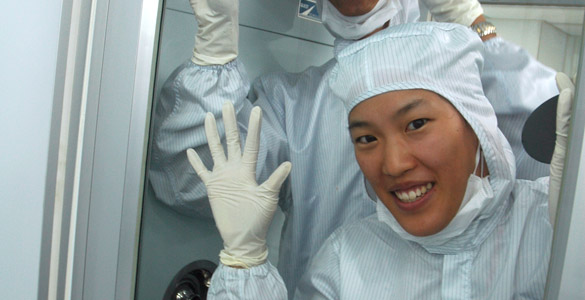 Like all good travelers, students who have participated in the groundbreaking MIT International Science and Technology Initiatives — better known as MISTI — have compelling stories to tell.

Xiaomin Mou describes her excitement and determination when, as an EE undergrad, she stood before a provincial education committee in China, and persuaded the group to fund additional Internet infrastructure for high schools.

Aeronautical engineering student Nicki Lehrer recalls the great sense of accomplishment she felt after making a presentation in Spanish to the board of directors of a Mexican startup airline, offering research analysis and recommendations on how to improve passenger loads.

Ciku Kimeira, a Management and International Studies undergrad, tells how she discovered her love of cross-border collaboration while traveling across Northern Europe and Scandinavia, developing quality metrics that will be used to assess a new logistics joint venture between the German and French national railways.

Learning skills for leadership in a global economy

For 35 years now, the MISTI endeavor, one of the most popular programs in the School of Humanities, Arts and Social Sciences, has given both students and faculty firsthand opportunities to understand and participate in the creation of knowledge outside the US laboratory environment. Students receive rigorous language and cultural training before their travels, and are placed in international internships and research programs closely aligned with their individual work and goals. By skillfully combining these factors, MISTI has pioneered applied international studies — a distinctively MIT concept.

The students' stories only hint at the impressive long-term results. MISTI alums start companies in China, run business units in Japan, meld Asian and Western medical knowledge in the US, and lead successful European research efforts. They are adept in cross-cultural environments — which to a great extent represent the future of innovation within globalized organizations — and they speak many languages in addition to English. Returning MISTI interns say that every MIT student should have this transformative experience.

As a result, MISTI is now a leading connector between MIT and global business and institutions, and an essential factor in meeting the Institute's goal of doubling the number of students who can take advantage of international opportunities.

"The skills we teach are integral to a first-rate education, and we aim to make them accessible to all MIT students."

Understanding the value of other perspectives

Suzanne Berger, the Dorman-Starbuck Professor of Political Science and a Founding Director of MISTI, likes to explain MISTI's value with the story of a biology graduate student who spent several months with a team at the Institut Pasteur in Paris. Upon return, the student told Berger that in her first month in Paris, it didn't seem to her like anyone was doing any work at all. Her colleagues seemed to spend more time conversing over coffee and cigarettes at a café than over a lab bench, and she was worried she was wasting her time.

But then, at the end of that month, the French team made a huge leap forward in their project. The student said it brought home the advice she had received from the MIT-France Program country coordinator—that in a new situation, it's important to listen to how people talk, not only to what they say, and to discern how ideas might be exchanged in unfamiliar ways.

"Providing students with that kind of mindset shift is our major goal," says Berger. "We want our students to see that the same problem can be tackled in many different ways, and that these different ways of finding solutions represent a tremendous opportunity for the next generation of technology development. The manager or entrepreneur who has the skills to unite diverse international teams will have a leadership advantage."

Prepared to work at the highest levels

MISTI traces its origins to a day in 1981, when Richard Samuels, now the Ford International Professor of Political Science, accompanied visiting Japanese executives on a plant tour as a translator. He was struck by the fact that the executives needed no translation; they spoke fluent English, and asked tough questions in American-style meetings and conversations. Samuels realized that few people at MIT had the linguistic and cultural skills to participate in similar meetings in Japan, which was then emerging as the first Asian technology hotbed.

Samuels, who is also the Director of the Center for International Studies, recognized that this type of isolation posed a risk to MIT's ability to maintain its global leadership, and envisioned a solution — a new initiative that would rigorously prepare MIT students to operate at the highest professional levels in Japan. In addition to intensive language lessons, participants took Samuels' Introduction to Japanese Politics and Society course (fondly known as "Raw Fish") and received instruction in Japanese business practices and teamwork.

"When you ask students about their MISTI experience, the word that comes up over and over is transformational. The professional challenge and cultural immersion of MISTI made them smarter and wiser — about the world and themselves."

With the program's formal launch in 1983, milestones arrived quickly: the first MIT interns in Japan, the first of many intern patents filed in Japanese, and addition of an MIT course in Technical Japanese. Through the efforts of longtime MISTI staff like Associate Director Patricia Gercik, even old-line Japanese companies with no history of taking US interns were persuaded to participate, in part by reminding them of their emerging role as technology leaders.

By 1994, over 50 interns annually were working in Japan. The MIT China Program was formed under the MISTI umbrella with similar success, including the China Educational Technology Initiative, which brought the Internet into Chinese high schools for the first time, and a visit to MIT by Chinese Premier Zhu Rongji. More recently, OpenCourseWare efforts have promulgated MIT's educational programs at universities across China, serving thousands of students.

The MISTI program grew steadily and in 2018 over 1200 students will participate in MISTI internships through 26 current country-specific programs including Africa, Japan, China, France, Singapore, Germany, India, Italy, Peru, Israel, Mexico, Spain, and Portugal among others. Host companies and organizations include innovation leaders like Siemens, IBM, BMW, Mitsubishi, and some of Europe and Asia's most prestigious research institutes and universities, as well as non-governmental organizations.

A unique strength of MISTI is its ability to make a custom-tailored match between intern and internship, so that the student's studies and interests are closely aligned with strategic projects at their host company or institute.

Motivated students working on meaningful projects can make a real contribution. "It's well beyond the typical undergraduate internship," notes Gercik. "Some of our interns are doing things that entry-level engineering personnel do."

Undergrad EECS student Scot Frank, for example, helped develop a Web-based music recommendation engine for the Chinese market at a Shanghai-based startup. "I worked with the CEO every day, and spent a lot of time with my co-workers and roommates," recalls Frank. "I seldom spoke English; I began to feel totally at home in Chinese, learning hand and sound gestures, and how to bargain in shops. It was a mind explosion — a new realm of what's possible."

L: Stephen Powleson works on a humanoid robot during his MIT-France internship at Aldebaran Robotics in Paris;  R: MIT-Japan interns visit the grounds of the Heian Shrine in Kyoto

Renaissance people in the field

How does this sort of connection happen? To a large extent, because of MISTI's country coordinators — in Frank's case, MIT-China managing director Sean Gilbert, who saw that Frank's technical skills, desire to experience independent living in China, and love of music would make a good match with yobo.com. Gilbert and his counterparts travel frequently, meeting with sponsor organizations to identify needs and overseeing the rigorous preparation process that all MISTI student participants undergo.

"The nature of our work requires country coordinators who are renaissance people," notes former MISTI director Berger. "They need the technical grounding to work with laboratory managers and research directors, the teaching skills to prepare students for time abroad, and the insight to make good matches." Finding additional coordination resources is one challenge as MISTI pursues its goal of scaling up to offer international experience to any interested MIT student.

MISTI also maintains close ties with the MIT SHASS Global Languages section, an essential contributor to the MISTI experience. In addition to the vital language skills that enable students to function in their host countries, GSL provides in-depth cultural instruction in the important protocols and rituals of daily life — from meeting rooms to laboratories to cafés.

MISTI opportunities also include outside-the-box programs like Le Laboratoire in Paris, where scientists and artists develop products together. Bioengineering major Alice MacDonald credits her time there with providing a better perspective for her experimental work. "I'm much more OK with things not being what I expected," she explains. "Art isn't black and white; with an experiment, if you're just seeking a result, it's easy to miss what's really going on. You have to ask, 'can I take this in a different direction?' I'm looking forward to applying it in my PhD work."

In addition, MISTI and organizations like Lufthansa, Ferrari, and the Paris Transit Authority co-sponsor topic-specific workshops on cross-cutting issues like reducing aircraft noise, and making technology more accessible to seniors. These sessions provide opportunities for students and faculty from diverse disciplines to collaborate in challenging international settings 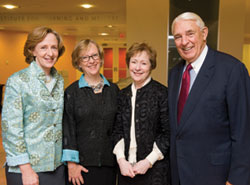 An important MISTI precedent was set in 1985, when the first of several rounds of funding from the Starr Foundation enabled the Japan Program to cover student travel expenses. Since then, support from Starr (including an endowment) has been augmented by the Freeman Foundation, the Ayukawa Foundation, and many national and local governmental organizations. The several dozen members of the MISTI Corporate Consortium also contribute, as do individual donors like Anthony and Rosina Sun — and as a result, MISTI interns pay no added cost beyond their tuition.

"We are committed to maintaining this policy as we scale up, because the skills we teach are integral to a first-rate education, and we must make them accessible to all of MIT's students," states Berger.

Expansion beyond the current nine country programs is also envisioned, adds Berger. "We have much to learn from places like Brazil, Russia, Scandinavia, Indonesia, Turkey and Africa, and they are eager to have their technology leaders collaborate with MIT." Indeed, organizations that participate in MISTI benefit not only from the presence of MIT's outstanding students, but from ancillary benefits like access to executive education opportunities, recruitment, and research collaboration.

Speaking about MIT's emphasis on global education, President Hockfield cites MISTI as a premier example of a well-designed experience. "If we want our students to be thoughtful, influential leaders, "she says," we must prepare them to lead on a global stage. When you ask students about their MISTI experience, the word that comes up over and over is "transformational"; the professional challenge and cultural immersion of MISTI made them smarter and wiser, about the world and about themselves."

With a 35 year heritage of catalyzing innovative connections, with strong support from the Institute, and a uniquely successful model, the MISTI program provides an ever-increasing number of MIT students the chance to tell their own stories of transformative international discovery and collaboration.