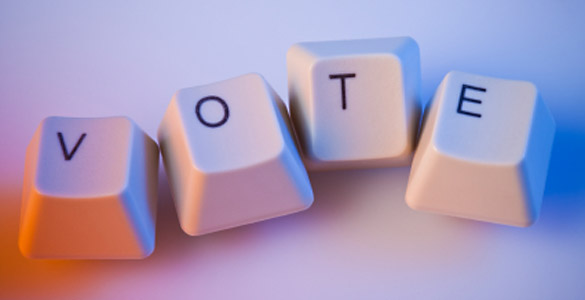 "It's the nature of the political process in America
to believe that if you reform the process, you can
change the world. The question is, does reform
change the outcome?

Can every vote count?

For most of us in America this year, here is just one Presidential election and there will be just one winner. For Professor Charles Stewart III, Head of the School's Political Science Department, there are 51 pending Presidential elections and millions of potential winners, namely the American people. In each of the States this November, groups of voters will participate in the "2008 Survey of the Performance of American Elections," an innovative Internet survey that Stewart helped design. The data that emerge from this national poll—the first survey ever to comprehensively evaluate the voting experience itself—will be a tool that American citizens can use to evaluate and reform the voting process.

The ultimate goal of Stewart's work: for every vote to count.

Improving the quality of American elections

For the past eight years, Stewart has been deeply involved in a national, collaborative effort to research, evaluate, and improve the quality of the American election process—"to make technology safe for democracy," as he puts it.

"Elections are a chain of events that must come off perfectly in order for a voter's vote to count," Stewart explains. If any link is broken—if the voter can't find the precinct, if the registration is flawed, if the voting machine doesn't work, the ballot is confusing, or the election workers miscount the ballots—the vote is lost. The 2000 Florida fiasco highlighted one of these links, the weakness of the machines. "

Machines and other problems

But as Stewart and his team successfully argued, machines were only one of the problems, and not the most significant one. Since 2000, billions of dollars have been spent to improve the entire election system, but as Stewart notes "virtually nothing has been done to measure the degree to which each of the links has gotten stronger. That's where our 2008 survey comes in. It is the first effort to measure the performance of the election system, from the perspective of the voter, at each link in the chain."

A citizens report on democracy

The national survey—in essence, a citizens report on democracy—will start online on November 3, and continue in the field for a week. Funded by the Pew Center on the States and the JEHT Foundation the poll will measure voters' experiences, and evaluate how well the election experience is working for citizens. Voters will be asked, metaphorically, "Would you recommend this polling place and your voting experience to others, and do you trust that your vote was counted as you cast it?"

As citizens, Stewart and his colleagues are, of course, highly interested in the conventional, singular election result in November. (His colleagues on the polling project include Steve Ansolabehere, Adam Berinsky, and Gabriel Lenz at MIT; Michael Alvarez at Caltech, and Thad Hall at the University of Utah.) As political scientists, they also eagerly await the data from their own survey—the opinions of American voters on voting.

A report card on American voting

"The results will provide a report card for the public, and make data available for the press, researchers, and policy-making community." Stewart says. The poll of Americans fresh from voting will provide millions of Americans with the information and tools to "own" their elections.

The ambition, Stewart says, is to "create a battery of questions that will be asked in future elections, so that the improvement (or deterioration) of the electoral system can be measured across time. We will also be able to report on which states seemed to have more, or fewer, problems. We can conceivably issue "report cards" about registration, lines at the polls, etc.

The innovative survey is also among the first to link Internet and telephone surveys, creating a process that will interview 10,000 people via the Internet (200 in each state) and 2,000 by phone, "Because it is becoming difficult to interview people via landline telephones," Stewart says, "something like the Internet will become the preferred mode for conducting national public opinion surveys. By doing both a telephone and parallel Internet survey, we will be able to calibrate one mode against the other, and better understand whether future trends in the numbers are due to the change in how the surveys are conducted, rather than a change in what the numbers actually are." 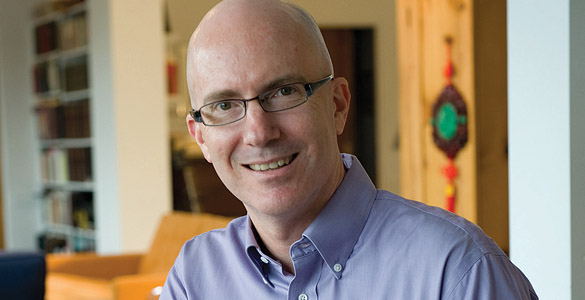 2012 | The state of the U.S. election system
New report from MIT and Caltech notes gains in voting-machine technologies, but warns they could be cancelled out by errors introduced through mail and Internet voting.
http://newsoffice.mit.edu/2012/mit-caltech-voting-technology-report-1018

2012 | Questions: Charles Stewart sizes up the 2012 election
MIT political scientist and voting expert weighs in on the state of the presidential campaign, the shifting demographics of America, and the tossup U.S. Senate races.

The criris in the U.S. Presidential Election of 2000

Charles Stewart's interest in voting, elections, and reform goes back, way back, even before the contested results of the 2000 Presidential election that led to the creation of the Voting Technology Project (VTP). To refresh readers' memories, in November 2000, there were widespread irregularities in the race between candidates Al Gore and George W. Bush, including a recount of the Florida vote that was contested and ultimately settled by the Supreme Court [Bush v. Gore, December 12, 2000]. During the ensuing crisis of confidence in the voting process, the former presidents of Caltech and MIT, David Baltimore and Charles Vest, convened a team of engineers, computer scientists, and social scientists from the two campuses to provide guidance for evaluating and improving America's voting technology.

Does reform change the outcome?

While the creation of VTP was a direct response to the tumultuous 2000 presidential election, political reform in the U.S. had been on Stewart's mind for almost three decades." I came of age during the 1970s when there was a lot of political reform going on, and I wondered if it made a difference," he says. "It's the nature of the political process in America to believe that if you reform the process, you can change the world. The question is, does reform change the outcome?"

Starting in 2001, the Voting Technology Project issued reports, sponsored conferences, offered consultations to analyze the state of voting technology and voting, and made recommendations. In October 2002, Congress passed the Help America Vote Act (HAVA), pouring four billion dollars into improvements, mainly in the area of technology—in particular to expunge punch card and mechanical lever voting machines—and also to improve the administration of elections.

A success in Georgia

Lo and behold, in 2000, the word "chad" entered the national vocabulary—along with semantic refinements such as "hanging chad," "dimpled chad," and "pregnant chad"—providing inspiration for pundits, satirists, and political cartoonists. Though the state of Florida got most of the publicity for its chads and botched election returns, research on residual (or lost) votes by the CalTech/MIT team in 2001 revealed that the State of Georgia's losses were actually higher than Florida's. "The Georgia Secretary of State noticed; she did the calculations herself," remembers Stewart. "She was mortified and pushed for reform." As a result, says Stewart, "Poor and minority people in Georgia are now having their votes counted."

The November 2008 poll, conducted by YouGov/Polimetrix, includes a list of 19 questions—friendly yet austere—that will be posed to voters the day after they have cast their ballots. There are nine categories ranging from "Intention to Vote" through "Using Voting Equipment" to a final question on the "Judgment of Voting Integrity." A gently posed, guilt-expunging, truth-targeted question on "Intention" asks, "In any election, some people are not able to vote because they are sick or busy or have some other reason, and others do not want to vote. Did you vote in the presidential primary held on February 5, 2008?" A "Voting Equipment" question asks, "Did you encounter any problems with the voting equipment or the ballot that may have interfered with your ability to cast your vote as intended?"

The poll's telling questions are rooted in the irregularities of the 2000 Presidential election, during which four to six million votes were lost, according to the original VTP Report. An estimated 1.5 million votes were not recorded because of voters' difficulties using equipment, and approximately 3.5 million Senate and governor votes were also lost because of technical problems. Approximately three million Americans who could have voted (they were registered) did not because of problems with their registration. Approximately one million registered voters did not vote mainly because of polling place locations, inconvenient hours, and long lines. There were voter identification issues, especially for minority voters. Many people who needed help understanding their ballots were left unaided, and many handicapped and elderly people could not gain access to their polling places.

In Stewart's newly published paper, "Improving the Measurement of Election System Performance in the United States," he notes improvements, chiefly in the "residual vote rate." (These are so-called lost votes, the difference between ballots that are issued and ballots that are counted.) Seventeen million more Americans voted in 2004 than in 2000. Approximately one million of these "new votes" were linked to improvements in voting machines and administrative practices recommended by VTP and other organizations.

"We were high on optical scanning—providing strong scientific evidence—and that became the voting method of choice," says Stewart. "We were a major influence in setting the groundwork for getting localities to make the change, including here in Boston."

The most significant improvement in "residual vote" rates occurred in counties in states that had undergone comprehensive election reform, and where the counties updated their voting machines, especially those that replaced the punch card machines. "In 2000, had the 34 million voters who used punch card machines used optical scanners instead, there would have been over 200,000 fewer lost votes," notes Stewart.

Heartening to the VTP and other reformers, Florida and Georgia, poster children for lost votes and other irregularities in 2000, showed the greatest improvement. Florida's "residual vote" rate dropped by 2.5 percent (about 190,000 more "recovered" votes), Georgia's by 3.1 percent (over 102,000 "recovered" votes).

"Does reform change the outcome?" Stewart asked himself decades ago. To convert the rhetorical to the actual: Has the CalTech/MIT Voting Technology Project, and all the academic research and conferences; all the commentary and citizen involvement; and Congressional appropriation of four billion dollars toward massive national reform made a difference? Stewart answers quickly. "That's what we're waiting to find out." 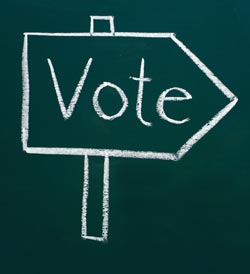 Lynda Morgenroth is a journalist and essayist, author of Boston Firsts: 40 Feats of Innovation and Invention that Happened First in Boston and Helped Make America Great (Beacon Press), and Boston's Neighborhoods: A Food Lover's Walking, Eating, and Shopping Guide to Ethnic Enclaves in and around Boston (Globe Pequot Press).