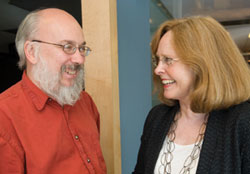 The Future of Journalism and Politics
and all forms of communication for civic engagement—are under scrutiny at the Center for Future Civic Media, now entering its second year as a partnership between MIT's Media Lab and the SHASS-based Comparative Media Studies Program (CMS).

Ellen Hume, the Center's Research Director, describes the mission: "Our objective is to develop tools and analyze civic media, which is any form of communication that promotes public engagement. Our work specifically involves using civic media within a geographic community." A former political and White House reporter, Hume has worked extensively with civic media, as head of the PBS Democracy Project, Executive Director of the Shorenstein Center at Harvard, and Publisher of the New England Ethnic Newswire.

Four Research Themes
The November elections cycle—and more broadly, how to form public groups that engage in politics and community building—is one of four research themes at the Center this fall. The others are: youth and new media literacies, community communication challenges, and new civic media technologies. CMS Founding Director Henry Jenkins, one of three MIT professors co-directing the Center for Future Civic Media, is combining the Center's meetings with lab sessions for his fall course on "New Media Literacies and Civic Engagement."

Established in May 2007 with a grant from the Knight Foundation, the Center draws on the strengths of the Media Lab and CMS, with the former focused on "inventing alternate technical futures" and the latter "identifying the cultural and social potential of media change." The funding provides sponsorship for up to eight graduate students per year, who take part in weekly meetings, an annual June conference, guest speaker opportunities, and regular contact with other Knight Foundation recipients from around the world engaged with civic media. Some students create new tools or applications that are tested in communities. Other MIT students are welcome to participate even if their work is not funded directly by the Center.

Community Engagement
In coming months the Center aims to provide multiple opportunities for community engagement on campus via dinners, brown bag lunches and other activities, including two election-related forums, co-hosted with CMS and MIT's Media and Culture Forum. The first of the MIT Communications Forums, "A Report Card on Media Coverage of the Presidential Election" was held on September 25. A post-election forum on "The Impact of New Media on the Election," with Marc Ambinder of The Altantic, Cyrus Krohn of the Republican National Committee, and Ian Rowe of MTV, with Henry Jenkins moderating, will be held on November 13, in Bartos Auditorium, from 5–7 p.m.

What is "Civic Media?"
The term "civic media" includes citizen journalism, (journalism by non-professionals, usually volunteers) but it is broader than that, Hume explains. She notes that by focusing on the burgeoning possibilities opened up by new communication technologies and the Internet, the Center is a more upbeat research area than some think tanks where journalists, wringing their hands, are trying to fix the troubled business model of existing media institutions. "Here, we are creating the future of the future," Hume says, "and we're not constrained by current media formats. Our project is meant to create new tools and applications, and to understand the behavior behind these tools." Hume and her colleagues want the Center to serve as the intellectual hub for the civic media field.

The "Hero Reports" Project
One civic media project emerging from the Center is MIT Media Lab student Alyssa Wright's "Hero Reports" project, which Professor Jenkins refers to on his July 18, 2008 blog entry as "among one of the very best (proposals) I've heard."

Jenkins notes that Wright's "project was inspired by New York's 'See Something, Say Something' campaign in the wake of 9/11. That campaign sought to solicit everyday citizens in New York City to be on the look out for suspicious activity."

Wright's take puts a positive twist on this scrutiny, inviting people to report instead on everyday acts of courage, generosity and kindness that are later posted on her website to "flesh out a portrait of the ways that her fellow New Yorkers are making life better within their communities," writes Jenkins. "She is also deploying state-of-the-art mapping tools to construct accounts of 'everyday heroism' in different neighborhoods, hoping that they can be read alongside maps which show crime rates and other negative factors, to give us a fuller sense of the places where we live. Ideally, such maps can become a source of local pride as people work to improve the perceptions of their communities by doing good deeds."

"What's Up"
Another tool the Center is working to develop in new settings is "What's Up," created by Leo Burd, originally in Lawrence, MA. "What's Up" offers young people at risk for gang activity a website that provides voicemail for those with cell phones as well as common ground via an online community developed to foster peer interaction. A third tool is "Selectricity," a civic media endeavor that aims to be a "voting machine for the masses." Developed by Benjamin Mako Hill, a fellow at the Center and a graduate student at the Sloan School, "Selectricity" enables nimble preferential voting that can be conducted and tabulated in minutes with accessibility by web or cell phone. "Selectricity" is already in use by MTV, student groups and nonprofit organizations who want help choosing leaders, meeting times, and other preferences.

Developing Empathy
A fourth project, led by Mitchel Resnick, a co-director of the Center and Professor at the Media Lab, uses "Scratch," a new programming language geared for children 8 and older to develop interactive reports, music, art and more. Last spring, a group of Boston public middle school students took part in a "Scratch" project where they were asked to produce stories about themselves, with the goal of developing empathy, a building block of civic engagement. The Center's third PI is Chris Csikszentmihalyi of the Media Lab, who is leading a team of students in the "extrACT" project, combining several civic media tools to help Colorado residents cope with the impact of extraction industries on their environment and health.

Analyzing and Creating
Reflecting on the Center's approach, Hume says, "Our research is about analyzing as well as developing civic media tools, and about processes as well as products. We are always looking for ways to connect and collaborate. We hope anyone at MIT who is interested in this work will contact me about getting involved." Hume is available at ehume@media.mit.edu