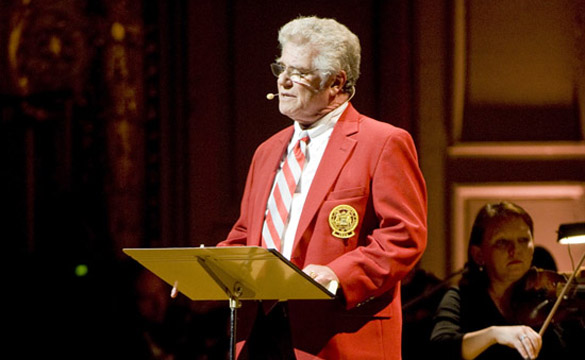 The Muh Award is designed to focus a light on the tremendous
talent MIT generates in the humanities, arts, and social sciences.

Just before 8 a.m. Pacific Time, Robert Muh, CEO of Sutter Securities, answers his phone, speaking in a hearty voice. The San Francisco-based alum (SB’59) spent 39 years on Wall Street, and for most of his professional life, has been keeping early morning stockbrokers’ hours.

For all those years, Robert Muh has also been supporting MIT, which he describes as an extraordinary place full of exceptional people. Many MIT students do not fully realize just how special the Institute is, he says: “When you’re surrounded by exceptional people, as you are at MIT, it’s the norm!”

Muh himself, of course, is one of those exceptional persons, a leader in finance who has also made a mission of championing MIT’s remarkable contributions in the humanities, arts, and social sciences.


Discovery at MIT
Growing up on Long Island, Muh considered becoming a physicist. “But once I got to MIT,” he says, “I discovered more fields of study and possibilities that led to my life-long involvement in finance.”

After MIT, he earned an MBA and a Master of Philosophy degree in Finance from Columbia University. He was with McKinsey & Co. (1966–1969), chairman of Newburger, Loeb & Co. (1970–1972) and founded Financial Services International in 1972. He joined Bear Stearns in 1978, and from 1984–1987 was a senior managing partner in the San Francisco region. In 1992, he cofounded Sutter Securities Incorporated.

The Muh Alumni Award Honors Excellence
A life trustee of the MIT Corporation, and longtime chair of the Humanities Visiting Committee, Muh has also served as president of the Alumni Association. Bob felt strongly that he wanted to do something new to showcase the world-class School of Humanities, Arts, and Social Science.

To celebrate this vital dimension of an MIT education, and of MIT’S achievement, in 2000, on the occasion of the School’s 50th anniversary, Bob and his wife Berit launched the Robert A. Muh Alumni Award. The biennial award, which includes a very popular public lecture, honors an MIT alum who has excelled in a career in the arts, humanities, or social sciences fields.

Humanities, Arts, and Social Science Leaders
Muh can cite a long list of distinguished MIT-trained leaders who have made extraordinary contributions in these fields, including, of course, the first five Muh Awardees: arts administrator Michael Kaiser, President of the Kennedy Center; Nobel-prize winning economist Robert Merton; renowned dancer and choreographer Gus Solomons, Jr.; philosopher Ned Block, Silver Professor of Philosophy, Psychology, and Neural Science at New York University; and former Secretary of State George Shultz. The next member of this growing and prestigious group will be announced in 2011. ∎

Support for the School
To learn about giving to the School, contact Anne Marie Michel, Assistant Dean for Development: 617.253.4075 | ammichel@mit.edu.

Lynda Morgenroth is an essayist and journalist, and the author of two books, Boston Firsts: 40 Feats of Innovation and Invention that Happened First in Boston and Helped Make America Great, and Boston Neighborhoods: A Food Lover's Walking, Eating, and Shopping Guide to Ethnic Enclaves in and around Boston. She is a contributing writer to Soundings Magazine.